Well, we have two new friends on the block.  Today, let's introduce ourselves to our new buddies over at BlockU.

We wanted to learn more about Utah, so we asked them a bunch of questions. They were kind enough to give us some answers.  And they also have more information about Utah here.

2008 was spectacular because it proved to us that 2004 was not a fluke. Without 2008, I do not know if this moment, Utah being invited to the Pac-Ten, is even possible.

For me, as a Ute fan, it's amazing to have watched this program grow. My first game was back in 1993. It was against Idaho. I was pretty young. Utah lost.

That shows you just how far this program has come and really, it's been a fairly quick rise.

Even a decade ago, all the way back in 2000, the Utes weren't realistically a BCS contender.

But now they're in a BCS conference.

In a bit over ten years, we've seen a new stadium, three head coaches and two of the greatest seasons anyone could ever imagine.

The topper was today.

Many thanks to JazzyUte and our new friends at BlockU for answering some questions for us today.  GO BEARS AND GO PAC12!

1.  How do you feel about changing your regional conference rival from BYU to Colorado?  Are you hoping your team will still play BYU yearly?  How tough is it to become a "rival" with a team you don't presumably have any history with?

The Utah-BYU rivalry has probably hit its fevered pitch. I would not be opposed to the idea of maybe postponing it for a few seasons to let things calm down a bit. It doesn't mean, though, that I want it cancelled - I don't. But I think it's turned into an unhealthy rivalry. It's more about hate than anything else. During last year's football game, BYU's quarterback Max Hall went on a epic rant at the end of the game calling all Ute fans classless and retelling a story about how, a year earlier, his entire family had beer dumped on them up at our stadium. If that weren't bad enough, Kyle Whittingham's wife was slapped by a Cougar fan after last year's game and there were stories of fights breaking out in Salt Lake City a year earlier.
That is not needed in a rivalry. You can hate a team without hating them. If that makes sense. Because of the level of emotion invested in the rivalry, which I suspect will be at an all-time high come this November, it is important each team pull back and reevaluate where they stand here. With Utah jumping to the Pac-10, it gives the chance for that and I expect when we renew the rivalry, it won't be as emotionally exhausting as it is today. 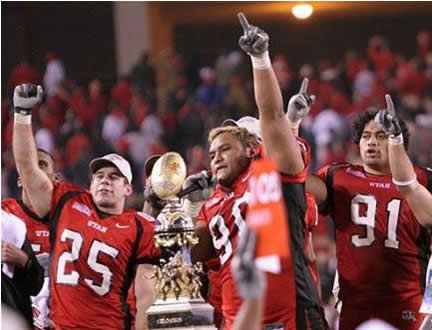 
Now Colorado actually is a perfect fit for the Utes because it isn't like they don't have a history. Sure, the programs haven't met since the 1960s. However, prior to that break, they met almost yearly from 1903 to 1962. They shared the same conference from 1903 to 1937. Both teams were, at one point, the dominant programs in the old Mountain States Conference. Even when the Buffs bolted for the Big Eight in 1948, the rivalry continued unstopped until it eventually ended in 1962.
So there is a template to work with here. Yes, most fans (myself included) don't remember the Colorado-Utah rivalry. So for a new generation of fans, there isn't a dislike there. I've never really cared one way or another what Colorado did on the football field and I'm sure it's a very similar situation from their point of view toward Utah.
The quickest way to cultivate a rivalry is for both teams to succeed. When you're battling for a division championship with the same team year in and year out, it automatically creates a rivalry. That means Colorado is going to have to step it up in conference play and the Utes will have to sustain what they've built in the Mountain West. If one or both teams struggle, it could be very difficult to find the right emotion or interest for the rivalry to succeed.
2.  Is there any lingering sense of disappointment that you're leaving the MWC just as Boise St is joining it?
There is no disappointment in leaving the Mountain West, even with Boise State. But there is a tinge of sadness because we've come to know these programs for so many years. A great deal of the Mountain West's current members have been together, in some form, since that old Mountain States Conference. Leaving that is not going to be easy. It'll be tough knowing Wyoming and Colorado State and Air Force won't be making up the conference slate anymore. 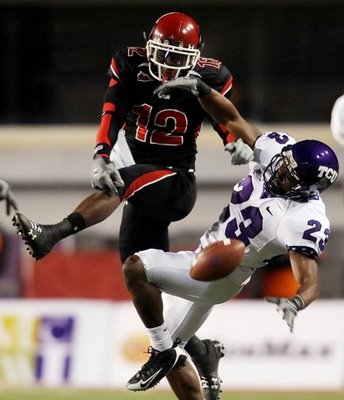 But that's the nature of athletics. Certainly over time, we'll have a similar connection with each Pac-10 member that we currently have with these Mountain West teams. It'll be tough knowing this is our going away tour. But in the end, it was the right decision and because of what the Pac-10 brings, there is absolutely no disappointment on my end.


3.  TCU v. OSU in the first game of the year for both teams!  Which one you rooting for?
I actually discussed this on Block U because, at the moment, I don't know. Ultimately, I'll cheer for what I believe is the best outcome for the Utes. If Utah has a special season, which most Ute fans agree is possible, we'll need TCU to win every game it plays outside of the one here in Salt Lake City. Right now, that's where I'm leaning.
4.  What is the biggest thing that Cal fans should be aware of about Utah?
You probably saw first-hand what the Utes are capable of doing when we met up in the Poinsettia Bowl. You've got to remember last year we were rebuilding. That was a rebuilding season for Utah football. This year, we're rebuilding the defense, but other than that, we're stacked for years to come. 2011 is actually looking like the Utes could produce one of its strongest teams to date. Much of that will hinge on Jordan Wynn's play this season. But if he's as good as he was in the Poinsettia Bowl against Cal, I have confidence we'll be one of the favorites to win the Pac-10 come September, 2011.

5.  How far off do you think Utah is from returning to the glory days in basketball?
Far. Really far. The program is not in a good state right now. Hopefully Pac-10 affiliation will speed up the process because at the moment, I think we're at least five years from making true national noise. Which, for so many fans who grew up during the Rick Majerus years, is extremely difficult to accept.