As is my normal morning routine, I drove to work this morning with Mike & Mike in the Morning on ESPN Radio on.  One of the topics they discussed was Kareem Abdul-Jabbar, and how Kareem is one of the most underappreciated great players of all time.  The discussion then proceeded to the great Henry Aaron and how Hammerin' Hank is (amazingly enough) one of the most underappreciated great baseball players of all time.

Then, as often happens, my mind wandered off the topic and onto Cal sports.  I started to think: who is the most underappreciated Cal football player of all time?  Hmmmm....

After a good ten minutes of thought, I came up with this guy. 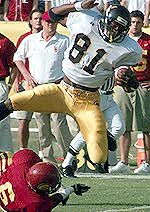 I give you Dameane Douglas.  When we think of Cal wide receivers of years past, it is natural for us to think of the likes of Desean Jackson, Lavelle Hawkins, Robert Jordan, and Geoff MacArthur -- guys who were productive over long periods of time for the Bears.  Back further, you might think of Bobby Shaw, Sean Dawkins, Mike Caldwell, and Brian Treggs.  Back even further -- especially if you're like me or CalBear 81 -- you might remember names like Matt Bouza and Rance McDougald.

Well, I appreciate you Dameane Douglas.  Even more so after seeing this old article in which he said before the 1998 Big Game:

"I'm not giving them any locker- room material," he says. "I will say there's not much I like about Stanford [sic]. I don't like that color, that's for sure. That's definitely something you grow to dislike."

Any other candidates for "most underappreciated" Bear?

Yeah, yeah, yeah -- I know what you're thinking.  This is a Cal sports related DBD topic?  MADNESS WATERCUBE!