Share All sharing options for: 10 Best Non Big Games of the 2000s: The Also-Rans

Join us in remembering Declarations of Bear Territories past!

Soon CGB will begin a countdown of the top-10 non Big Games of the 2000s. But before we begin another (mostly) fun nostalgia trip down memory lane, we had to recognize the also-rans. Praise be to Tedford, because when we began compiling this list I was pleased to realize that there were easily more than 10 deserving candidates. Coming up with 10 games worthy of inclusion might have been a painful task in the 70s or 80s, but eight years of Tedford has provided ample material to sift through. Almost every year since 2002 has multiple deserving candidates, even disapointing years like 2007. And you never know, maybe a rare Holmoe win will sneak into the top 10! (Spoiler alert: They don’t.)

So without further ado, here are the games that received votes, but couldn’t quite crack the top ten in a voting of CGB writers. The list is presented (mostly) chronologically. Have fun speculating about those that made the cut!

Why it should make the list: A wild, crazy game that saw 7 total turnovers and 3 overtime periods before Cal emerged with a win at home. The Bruins were ranked #13 coming into the game but ran into the hit squad, with Nnamdi Asomugha and Andre Carter providing a number big plays. A slew of Cal fumbles let the Bruins back into the game but Kyle Boller wouldn’t be denied.

Why it didn’t make the list: Because nobody wants to remember that football was being played in the first two years of the decade, even the wins? I’m 90% sure I watched this game and 100% sure I purged everything from the Holmoecaust out of my memory. Still, it’s pretty skocking how many Cal players are still in the pros from this game. Can I get a Fire Holmoe, folks?

Why it should make the list: Cal finally ended a 19 game losing streak to the #12 ranked Huskies in one of Kyle Boller’s best performances as a Bear. The Cal defense bent (399 yards passing for Washington) but rarely broke, holding UW to four field goals and causing three turnovers. This was the win that confirmed that Tedford had turned things around in Berkeley.

Why it didn’t make the list: Again, a lack of drama probably hurt this game, and again, this wasn’t the greatest Washington team ever, though they did make a bowl (barely). This might be the toughest omission on the list – I can’t come up with many reasons why it shouldn’t be top 10. 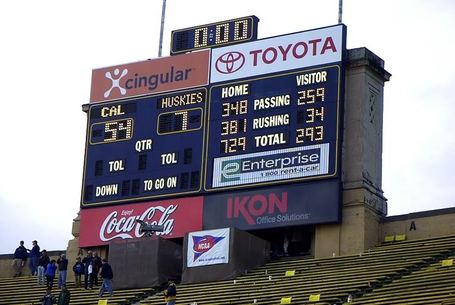 In before Ohio Bear!

Why it should make the list: In terms of yardage gained, this was the greatest performance by a Cal offense ever. Aaron Rodgers, J.J. Arrington, Geoff McArthur and the rest of the Bears rolled up 729 total yards and the Bear defense intercepted four passes en route to a humiliation of Washington. Plus a win was required to secure an eventual invitation to the Insight Bowl.

Why it didn’t make the list: A lack of drama? Washington was a solid team that year, but not good enough for a win to resonate. Plus, this game is overshadowed by a number of amazing, thrilling games in 2003 (stay tuned for more!).

Why it should make the list: Because it was easily the most exciting Cal win in 2004, a year that the Bears mostly spent blowing other teams away. A late, awesome touchdown catch from Rodgers to McArthur finally gave Cal a lead and Oregon’s tight end dropped a pass on 4th down that would have put the Ducks in easy field goal range for the game winner. Just another in a long line of thrilling games against the green and yellow crew.

Why it didn’t make the list: Probably because Cal ended up escaping more out of luck than anything else. Oregon was a good team that year, but Cal was better and they shouldn’t have needed a dropped pass to win at home. 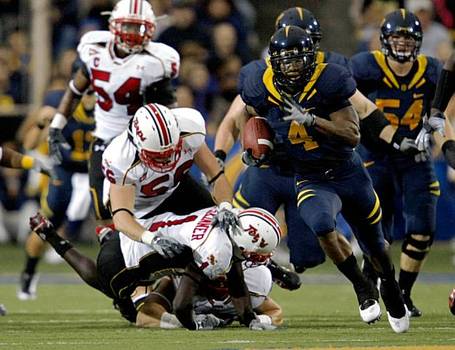 Maryland trips over itself trying to catch The Jet via imgs.sfgate.com

Why it should make the list: It was a fun, blow-out revenge game that saw Jahvid add to his highlight reel with another incredible touchdown run full of moves only Jahvid can pull off.

Why it didn’t make the list: As it turns out, Maryland was bad in 2009. Really, really bad. If anything, I’m bitter about this game because it raised my expectations that much higher before cruel reality struck in Eugene.

Why it should make the list: Because somehow this was Tedford’s first ever win in Los Angeles. Illegal touchdowns, Maurice Jones, Chase Lyman’s knee and painful missed field goals had all conspired to create a truly weird and painful 0-for-Los Angeles and this game helped to exorcise some demons. Mychal Kendrick’s 4th quarter interception was the nice cap to a solid win.

Why it didn’t make the list: UCLA really wasn’t very good. They weren’t a train wreck, but Cal really had no business losing to them, even on the road. This game was only close to making the list on the basis of ending that streak. 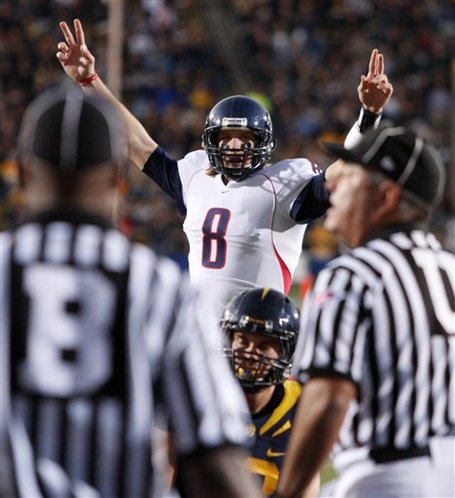 Nick Foles celebrates learning one of the basic rules of quarterbacking via a.abcnews.go.com

Why it should make the list: With Cal fans beginning to squabble about the direction of the program and a once promising season threatening to fall completely into the abyss, the Cal defense rose up and turned in out of their best performances of the Teford era – completely stymieing a red-hot Arizona offense that came in putting up cartoonish numbers with Nick Foles under center. The Cal defense got very little support from an inconsistent offense, but Kevin Riley and Shane Vereen got just enough done to win the game, including a thrilling 61 yard touchdown by Vereen that seemed to seal the game.

Why it didn’t make the list: This game is overshadowed by the other incredible highs and lows of the 2009 season – the USC and Oregon blowouts, Jahvid’s frightening fall and the amazing Big Game win. Maybe if it was against a bigger rival or had more conference title implications this game would have finished higher.

Why it didn’t make the list: You mean, beyond the obvious?