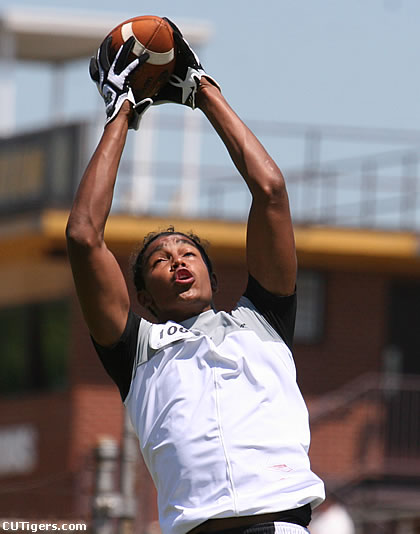 Maurice Harris is your sixth pledge of the Cal 2011 class.  A physically impressive wideout from Northern Guilford High of Greensboro, NC, Harris chose to reunite with his cousins Keenan Allen and Zach Maynard at Berkeley after attending his second camp w/ Tedford & Co last weekend.

The US Army All-American Combine notes from earlier this year, where Harris was named First-Team Offense -

There were no standouts like Kyle Prater or Markeith Ambles were last year, but there was plenty of competition for the top spot at this position. Two receivers from North Carolina performed well. Maurice Harris was a sure-handed receiver that created space using his huge frame and power. Nigel King had more of a basketball mentality, jumping an amazing 37 inches during vertical testing. He also showed the ability to stretch the field. Our third first-team member came from Texas. Ty Montgomery looks more like a running back than a receiver. He was able to catch the ball away from his body and at its highest point. - Rivals via FVSports.com

Does anybody have any more information on this guy? I don’t get it. Yeah, he’s part of that North Guilford connection with those incoming NC recruits, and has been offered by some quality schools. Someone had mentioned that they were wow’d by his highlight reel, and that he was destined to become a five-star prospect this recruiting season.

But then something’s not computing for me. Granted, my only point of reference is a 3 minute video on athlete vault here: http://www.athletevault.com/index.php?id=924. On Scout, he has a Scout combine listed 40 time of 4.97 for a WR. I take any listed time with a huge grain of salt for any player on any recruiting website, but it looks like he PLAYS a 4.97 in that tape. The length of the video doesn’t meet my standard for evaluation (at least five minutes long), but just judging from the above, he is no better than a low three-star, high two-star—think LaReyelle Cunningham. All of his offers come from the SAME SCHOOLS that recruited the NC trio. Has he added any offers since this past national signing day? A prediction, but I don’t expect him to make it onto any of the major sites’ lists (Scout 300, ESPN 150, Rivals 150) and for Harris to slip in receiver rankings as better undiscovered talent is graded—Harris is currently #53 receiver nationally on Scout. Hope I’m wrong, though.

Scout.com camp data from 2009 in Charlotte -

Harris is very similar to another premier playmaker in this class Trey Metoyer. He has a terrific blend of size, speed and athleticism and he is a physically imposing figure with good overall strength at this stage. Harris is a vertical threat due to his size/speed ratio and is also capable of taking the underneath catch the distance. Given his size he is as impressive and overall athlete as you will find at the position. He is a competitive, tough receiver with solid open field running skills to boot. Is a quick and explosive off the line of scrimmage. Has good short area burst and some wiggle too. Can catch the ball without breaking stride and will get upfield immediately after the catch. Plucks nicely and tucks right away and he appears to have strong hands. Flashes the ability to make the spectacular grab in contested battles. Shows good focus. He has good body control and adjustment to the ball while in the air. He has good leaping ability and will win most battles due to long arms and natural height. He is very good on slants and short-to-intermediate routes including screens because of his quickness and size to shed tacklers. He creates good separation with a burst out of his cuts. He is not an accomplished route runner yet, but has upside to supplement his tools in this area. He is one of those players that is as fast as whoever is chasing him. Overall, Harris is going to be a hot commodity with his blend of athleticism and measurables. He is playmaker with a nice feel for the game. - BI

"Maurice is around a 4.65 forty," said Yelverton. "I'm not sure where the slower reported times are from. Maurice has never been to any combines. I know he got timed at a couple school and he ran a 4.61 and 4.67 there, but his game speed and his forty speed are totally different. And you won't find anybody who has better hands. Keenan's [Allen] a great receiver but even Keenan will tell you that Maurice's hands are even better." - BI

According to wide receivers coach Kevin Daft's evaluation, the Bears have quite a bit to be excited about. Daft worked extensively with Harris throughout the course of the weekend and told him both the good and the bad about his game.

"Oh yeah, I worked with him after every practice," Harris said. "During practice I worked with him, and a little extra after practice. He introduced me to a lot of things, and stuff that I need to work on, like my route-running and my timing on my steps-just taking everything slow instead of trying to rush to everything. He's been teaching me a lot, and I'm going to take it back and use it to make me better."

Harris is not as fast or explosive as Allen, but he says that his game speed could very well be better than his speed in a combine setting.

One thing that Harris could have over his five-star cousin is size. At 6-foot-3 and almost 200 pounds, Harris is almost exactly as big as Allen-who is a year older-and has the frame to add some more muscle over the next year before he makes the jump to the college ranks.

"(Daft) likes that I'm a big, physical receiver that uses my body to get separation, and my strong hands-he really liked that," said Harris. - Ryan Gorcey, Rivals