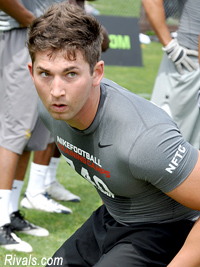 Jordan Morgan is your fifth pledge of the Cal 2011 class.  A dual-threat athlete playing quarterback and safety, Morgan led his Valley Christian High (Chandler, AZ) team to the class 2A state championship last year. He transferred to Chandler High this season after his father, Bill, resigned as the Valley Christian Coach.

Morgan received his scholarship offer from Coach Tedford after working out for Coach Pendergast at camp Saturday and pledged on Sunday.

Morgan canceled planned visits to San Jose State and Stanford, after the Cal visit Saturday. He was impressed not only by the upgraded football amenities (such as a state-of-the-art weight room) that should be ready in a year, but by the optometry school across the street from the football stadium.

"It [Cal] just has everything I need," Morgan, who has a 3.75 grade-point average, said Sunday from the Bay area. "Great coaches. The optometry school. The new weight room."

"I love how coach Pendergast does things," Morgan said. "I like how (associate) coach (Ron) Gould is up front with you."

"People thought I was going to a big school [Chandler HS] to try to get  a scholarship," Jordan said. "That was not the case. Maybe this will shut up  the haters." - Richard Obert, AZ Central

Enrolled at Chandler for his senior season, the 6-foot-0 , 195-pound prospect played as a junior for Valley Christian (Chandler). He passed for 1516 yards and 23 touchdowns, and rushed for 1450 yards and 20 scores. On defense he had 139 tackles and four interceptions (two returned for touchdowns). - ESPN On the trail

Bill said Colorado likes Jordan as a free or strong safety and nickel backer. Colorado also would like him to punt.

Colorado coaches really like his skills and speed (4.5 seconds  in 40 yards) and ability to break on the ball," Bill Morgan said.

"Cal's bringing me in at safety," said Morgan. "With the defense we played last year, I came up and played the run and put up a lot of big hits, but I also dropped back in coverage quite a bit, too, and would say I have strong ball skills." - BI

Scout.com has Phoenix combine data for Morgan from 2009 -

Data from US Army National Combine earlier this year -

"I thought I'd decide after my senior year but it has everything I want," Jordan said. "I didn't want to be anywhere else. It can't get much better than California weather and Pac-10 football." - East Valley Tribune

Hard to dislike a recruit who skips out on 'Furd after visiting Berkeley. Welcome to Cal Jordan!