Pete Alamar has been much maligned for his special teams units the past few years. However, he has shown he can find skilled tight ends, all of whom have contributed greatly to our offensive production, especially in the rushing component of the game. 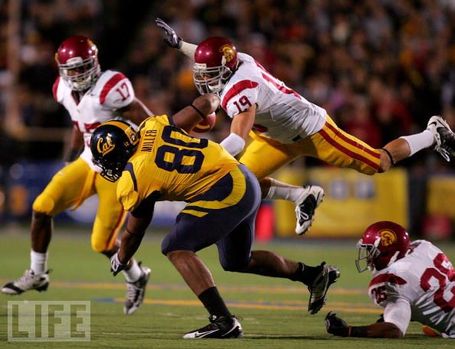 via cache2.asset-cache.net (Image from LIFE)

Miller showed plenty of promise as he broke out with some spectacular grabs through the season. He looks like he has the potential to be the most talented pass catcher we've ever had. It remains to be seen whether he can block as consistently as the guys ranked higher on this list though, but all signs are promising.

His one catch in 2008 was the last offensive play of the season and Nate Longshore's last touchdown throw as a Golden Bear. He was the biggest plus of the USC game last season and also made huge catches against Arizona State and the Furd to set up those big victories.

Note: We're scrapping the Google Forms for this series. Just use the comments to rank the tight ends or add any additional anecdotes or favorite moments concerning these players. We will still be using the feedback and your rankings in future posts to determine the CGB All-Decade Football Team. 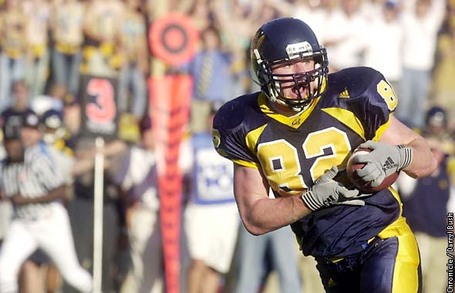 Swoboda did not get many looks from the quarterback during the painful 2001 campaign, as the tight end position was apparently de-emphasized (why, I do not know). However, he broke out in 2002 with a 42 catch season, the best individual pass catching season by a tight end. He hauled in six catches or more in five games, second on the team to Jonathan Makonnen.

He saved his best games against the toughest opponents. He snagged 6 catches, 60 yards and a TD against the Rose Bowl-bound Cougs. Add in another 6 catches, 53 yards and a touchdown to help pace Cal to a 21-3 lead over USC before the Trojans came roaring back. Then he backed that up with two seven catch games against Oregon State and Arizona (Curiously, Cal lost all 4 games).

When teams started to clamp down on Makonnen and McArthur, Boller had his ace in the hole in Swoboda. 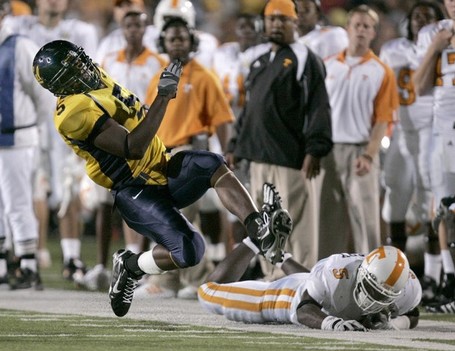 People might not know this, but Morrah was originally known for his great defense. Although he played both ways (he did play tight end on offense), he was considered one of the top defensive end recruits and was a big pickup after the excellent 2004 campaign. Cal gave him a choice on which way to play though, and offense was where he wanted to go (Keenan Allen before Keenan Allen).

Nevertheless, he ended up being the most reliable pass catching option on this list. We're not going to factor in the lack of catches against him, since he probably had the least effective quarterbacks of the Tedford era throwing to him in 2008. His 8 touchdowns in his junior season set a Cal record for a tight end, as he caught a touchdown in six of his first seven games. The best game came against Michigan State--as the only real returning receiver with offensive experience, Morrah snagged in 5 catches for 93 yards.

We were all a little surprised Morrah decided to leave early, but there's no denying he had the talent to go pro. 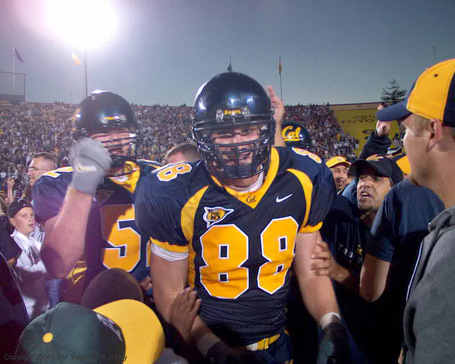 People might remember Jeff Tedford accidentally stumbling onto Aaron Rodgers on a recruiting trip at Butte. They probably forget the reason he accidentally stumbled into Rodgers was because he was recruiting Cross. While we got lucky to grab Aaron, Cross was no slouch either. He had 7 catches for 41 yards in the 2003 USC upset, and had 5 catches for 88 yards in his final two games against Oregon and ASU before injuring his leg and missing the rest of 2003. With McArthur rampaging, 18 catches isn't that bad.

In 2004, with Arrington and Lynch dominating the majority of games with their legs, Cross's big contributions came up in the line, helping to drive defenders away. Cal was the best rushing team in 2004, partly due to Cross's yeoman work in the trenches. And he had some good performances mixed in there--5 catches and 40 yards against USC, 4 catches and 53 yards with a TD against UCLA. 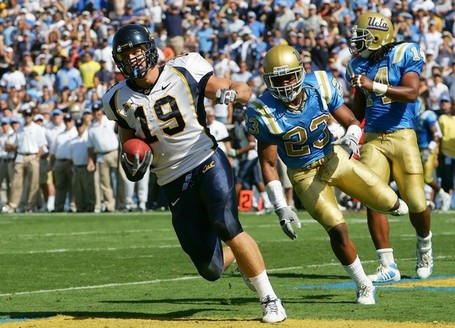 Cal's version of Iron Man, minus the arrogance and real cool suit. Stevens started his final three seasons and played all of the 50 games he had a chance to play in from 2004 to 2007, third only to Dante Hughes & Syd'Quan Thompson in games played as a Golden Bear.

The lack of catches compared to the rest of the guys on this list is a little surprising at first, although not so much when you consider the type of receivers and rushers who we could throw to during his time here. In fact, through four years Stevens never had more than three catches in a single game. Doesn't really matter. Stats are superficial when judging tight ends. The 50 games and the trust Tedford put into him four seasons running (he started over a nicked up Cross against Oregon in 2004) matters way more.

Imagine if Stevens didn't get concussed on the opening play at Rocky Top. We probably still lose, but do we get rolled? Doubtful. Craig was that important to our team's offensive game, both on the running side and the passing side. He wasn't the best pass catcher on this, but he did stretch the field and kept teams from focusing totally on Desean, the Hawk and Rojo.

But like Cross, the blocking is what sticks out. He was such a fundamentally solid tight end. Arrington, Lynch, Forsett all prospered when he was on the field sealing off the defensive end, or running downfield to take out the middle linebacker. Take a look at those Marshawn and Forsett tapes again and look out for how #82 and #19 (see the sad story on why he changed his number) help unleash their fury.

Next season he gets to block for Chris Johnson. Time to show Titans fans what Bears fans already know.