Share All sharing options for: Remembering The Seniors: Theo Robertson

NorCalNick:  Our most senior of seniors, I'll remember Theo as one of the most quietly efficient and intelligent Cal players - until he stepped up and did something spectacular to save the Bears.  His three to save Cal against UCLA his freshman year, his three point play to beat Washington in triple OT in 2009 and his deep three to kill Louisville's final comeback attempt all come to mind.

I'll also remember his constant battles with injuries that cost him a year of basketball, important non-conference games his senior year, and perhaps his shot at professional basketball.

Avinash: As someone who's watched thousands of games of basketball, you love watching guys who grasp the nuances of the game rather than trying to own each and every moment. The Bill Cartwrights, the Scottie Pippens, the Tim Duncans--players who did everything with purpose and intelligence rather than with impulse and aggression. Theo's one of those guys. He's not on their level physically, but he's got that high basketball IQ that makes the team click better.

It takes a real basketball fan to appreciate the little things Theo does. Like reversing the ball when the defense is playing toward one side of the court. Like moving off the ball and getting into position for wide open shots. Trailing the basket and trying to put back errant layups. Forcing players away from their spots on the court and making them take tougher shots, or forcing them to pass away and get theirs. He could have a big impact on the game without putting up his numbers.

And his shot selection was excellent, stroking wide open, spot up Js. So smooth. So tight. So Theo. (In unrelated news, despite all the pub Jerome and PC got, Theo was the most offensively efficient of the three last year, and the best shooter of the three.)

There were times where I would get mad at Randle, and at Christopher, even at Boykin. I rarely got mad at Theo. When his decision-making was impeccable, his team would win.

Clearly, a large jump offensively after that lost season in 2007-2008.  His numbers increase even though his minutes are not neccessarily increasing.  What I like most strongly about this is the 3 point % there.  In 2008-2009, he hit nearly almost 50% of his 3 point shots.  That's pretty impressive.  What are your thoughts about the stats?

Avinash: Like I said, he takes high percentage shots, he moves the ball around, and he generally makes excellent decisions. Additionally, his average +/- on the floor was +8.2, 6th in the conference, making it hard to argue that the Bears didn't drop off on both the offensive and defensive sides of the ball.

It's too bad his physical issues just haven't allowed him to blossom into a greater player. I feel a lot of his mobility has been limited this past season due to his hip problems, and it kept him from making tough moves on a regular basis.

Kodiak:  When Theo was first signed with the Bears, I don't remember there being a lot of buzz or hype.  He was a local guy from De La Salle.  He had a rep of being a good outside shooter who played a fundamentally sound game.  Usually, "fundamental" is a euphemism for less-than-stellar athleticism.  I'm not positive, but I think he was a late signing...almost a consolation prize for missing out on someone with a bigger name or more tape.  Talk about found gold.

Right out of the gates, Theo showed that he could play.  After years of watching Cal freshmen look overwhelmed by the bright lights as they transitioned to Div-1 ball, it always stands out when you see a guy who acts like he belongs.  He didn't turn the ball over, didn't force up bad shots, and proved to be fairly reliable at hitting the open shot.  Sure, he was a little heavy-footed on defense and would occasionally run someone over when driving to the basket.  But, I think Cal frosh used to have some type of quota on the # of charges they needed to inflict before the year was out.

Take a look at how powerful he was coming out of high school. Could you imagine Robertson finishing those drives at the basket this year? Think of him and Christopher peaking at their athleticism and being able to keep those finishing moves. We could've been a force to be reckoned with.

Still, he made up for it. Like I said before, Theo had one of the smoothest shots in college basketball. He squared his shoulders, got his hands in place, and managed perfect rotation on his shots. You know he's been practicing a lot on his shot.

Kodiak:  Unlike Jerome, PC, and Boykin who dramatically changed their play as they gained experience, Theo's overall game stayed the same throughout his Cal career.  He was quite reliably a dead-eye shooter who took good shots, made the occasional drive, played tough D, made the open pass, and boxed out.  He simply got better across the board with more experience.  The biggest improvements that I saw from freshman to senior were in his ballhandling and his overall strength for establishing position and pulling down tough boards.  Although he had several great games, he very rarely had a spectacular game because he was unselfish.  He also rarely had a horrible game - even when he wasn't scoring, you could count on him to contribute on the glass, with assists, or on D.  I kept waiting for him to have a game where he just said "F this.  I'm the best shooter on this team and tonight I'm getting off."  Not his style, though. 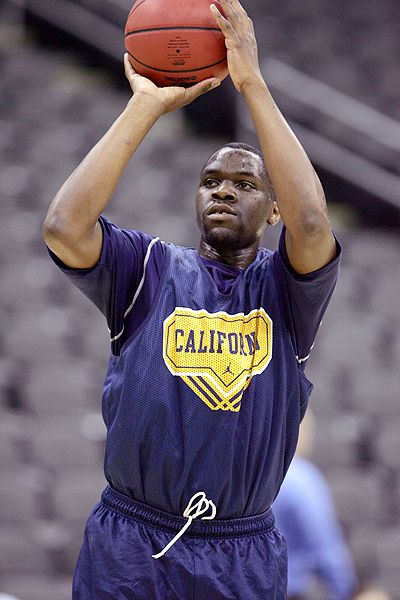 He suffered some bad luck with hip surgery and then a stress fracture of his foot.  For anyone who has had to come back from a major surgery, you know that rehab is no joke.  It's a testament to his mental toughness that he came back and showed little to no ill effects.  It's also unfortunate that he had to play most of his career out of position.

I think it was well-deserved that he received the team MVP this past year.  No disrespect to Jerome - he made some huge shots and absolutely carried the Bears at times...Or to PC, who was easily their best athlete and could be unguardable when hot.  But, who was grabbing that critical board to stop the other team's run?  Who was locking down their wing or post scorer?  Who was setting the screens and making the extra pass?  Theo did all the little things that the team needed.  If PC was their stud athlete, Jorge their energizer, Jerome their fearless assassin, and Jamal their rallying cry, Theo was their soul;  the quiet embodiment of effort, desire, and hard work.

OhioBear:  It was March 2008 and I had managed to score a courtside seat at old St. John Arena in Columbus, Ohio for the NIT second round game between Cal and Ohio State. I got there early -- really early -- it was early enough to see the team come out for the pre-warmup shootaround.  One by one, I watched enthusiastically as our guys came out.  Ryan Anderson.  Jerome Randle.  Max Zhang (I thought, "man, he's friggin' tall").  Eric Vierniesel.  Patrick Christopher.  Jordan Wilkes.  Jamal Boykin.  Harper Kamp.  Nikola Knezevic.  And on and on.  And then someone caught my eye over on the Cal bench.  He was in street clothes, watching the Cal team just as I was doing.  And it hit me.

And why did it hit me at that moment?  Because, sadly enough, I'd sort of forgotten that he was a member of the Cal basketball team.  It seems silly to say now, but it was sort of true.  Sure, I didn't literally forget about him.  I mean, if you quizzed me on the Cal basketball roster, I would have eventually come around to identifying him as a guy redshirting due to the hip injury.  But as I had watched that Cal team through the 2007-08 season, watched them with the sort of love and frustration that only an Old Blue could have, I had sort of been lulled into thinking this was it: lots of scoring by Ryan Anderson, some erratic play by Jerome Randle, flashes of something from Patrick Christopher, untapped potential from Jamal Boykin, etc.  And then on that night, in the pregame warmups for a second round NIT game, I wondered something I probably should have wondered a lot sooner: what would this team have been like with Theo Robertson? 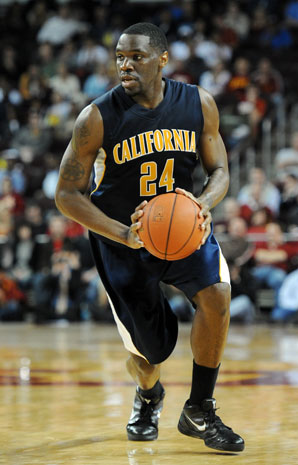 As it turned out, that second round NIT game was the last of the Ben Braun era.  Mike Montgomery took over, Theo Robertson got healthy enough to play nearly two full seasons, and the rest is history.  Historic history.  Theo was the "glue guy" to end all "glue guys" for the team that won Cal its first Pac-10 championship in 50 years.  I've read Monty call Theo, "our best glue guy," which is an apt description, but one that perhaps understates his importance.

LeonPowe:  Theo seemed to be one of those guys who was always around when you needed him, but you never really noticed him. When Hardin and Wilkes were both injured, he slid over to play the PF slot. And then when he was gone that entire year with the hip injury, nothing seemed to run smoothly on the court - but with him added to the P.Chris/Randle twosome - things just seemed to click. He wasn't the best Bear, but he was the best Bear at knowing what was needed and providing it.

atomsareenough:  I liked to think of Theo Robertson as our quiet assassin. He's a guy who could easily drop 20 on an opponent any given night, yet he was never the guy who commanded the most attention from anyone. He didn't have the preposterous range of Jerome Randle, who regularly rained 3's from six feet beyond the arc; he didn't slam home dramatic alley-oops like Patrick Christopher; he didn't have the fiery disposition or clever post moves of Jamal Boykin; however, because of his all-around solid play in so many aspects, he was just as important as any of those guys to the Bears' success.

Theo's low-key demeanor and non-flashy playing style meant that you really noticed him more when he wasn't playing than when he was playing. His dependability and flexibility to fill multiple roles really lifted the Bears to that next level, from being merely a decent team with some exciting players to being a Pac-10 championship-caliber team. His sound fundamentals and smart play made the team savvier and much more difficult to beat, because they were less likely to beat themselves. He led the team in 3-point shooting percentage, not simply because he was the best shooter, but because he took the right shots, and didn't force something up when he didn't have a good look. Most of all though, I'll remember the ice in his veins. When the game is tight and you need one more bucket to seal the deal, just look for Theo in the corner and he'll bring you home a winner.

It is true that Jerome Randle was the Pac-10 player of the year and will perhaps always be synonymous with the 2010 Pac-10 champion California Golden Bears.  And with good reason -- Jerome was a great player for Cal.  But I think of it this way -- if Randle was the heart of the Cal Bears, Theo was the soul.