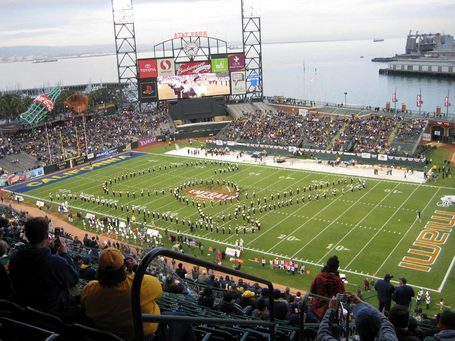 As expected, the decision for next year's venue has been handed down. Looks like 256 of our 750 voters are going to be very happy. And 154 voters were very right. Okanes gets the scoop.

Cal had been considering bids from AT&T Park, Candlestick Park and the Oakland Coliseum. The school was believed to see advantages and disadvantages of each venue. Candlestick obviously is the most outdated stadium and also the farthest away from Cal. The Coliseum could have been a scheduling headache with the A’s and Raiders also playing there, but it’s the closest to campus. The biggest drawback of AT&T is that it has a significantly less capacity than Candlestick or the Coliseum. But it also is the newest facility with the best amenities, and considering it is right off the Bay Bridge, it’s a tolerable location.

So there are plenty of merits listed above. Let's give our expanded pros and cons after the jump.

Updates from the press conference: (also, thanks to CaliforniaEternal for updating us in the comments). If you missed it, you can watch it here.

Some pros are obvious.

1) Close proximity to San Francisco, which should be attractive to students (tailgate, then explore and/or party afterwards).
2) Great bar scene in the South Beach area for the alums, way better than anything at Berkeley.
3) Good transportation from around the Bay (BART from East Bay, CalTrain from around the peninsula and South Bay); should be relatively easy for fans to get to and from games.
4) Natural grass field will be an interesting adjustment for our players, but since I assume we'll be practicing at Witter next year while Memorial gets the retrofit, our team will be well-adjusted to the playing surface.
5) Picturesque scene with McCovey Cove and the Bay right behind the stadium. Not quite as good as Memorial (how do you beat the whole Bay?) but it's pretty ideal.

1) Smallest stadium, which could mean the weakest home crowd advantage, and trouble for non-season ticket holders to buy individual games. Other than the students and young alum, it's likely that only the richest fans will be able to attend Cal games next season.
2) It's a baseball field. Converting it to a football stadium is not going to be easy, and we could see at least two or three games played with that annoying infield still in place (Dolphins and Raiders games get super messy in September with that dirt track in one corner of the field).
3) If the Emerald Bowl is any indication, we might have sideline issues.
4) Playing with a baseball field for at least the September games, possibly the October games. Might mean lots of home games near the tail-end of the season, when it gets miserably cold.
5) For those who choose to drive...we wish you luck. Could have wandering first quarter crowds that only start filling up by the second quarter.