[TnH Note:  NorCalNick and I attended the game on Saturday with some friends.  In between getting ridiculously sunburnt, we witnessed a fairly good game.  We worked on this post together.  Away we go!] 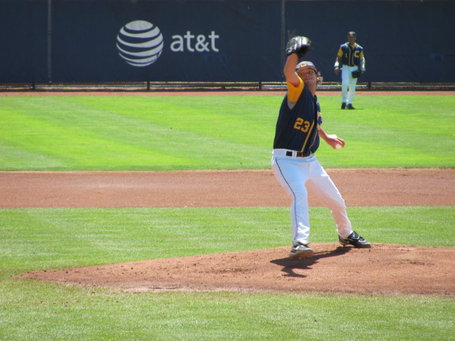 If the Cal baseball team on Saturday were a high school experience, they'd be that the sort of late bloomer who starts slow, but manages to be homecoming king by their senior year.  For the first third of the Cal game, it appeared that it would end poorly for them.  Freshman phenom Justin Jones was doing a houdini act.  Like the last Cal baseball game I attended (Cal v. UW from Cal Day), Jones was letting runners on base and then trying to limit the damage.  On that day, he went 8.1 innings, giving up 10 hits, but only gave up 2 runs.  In the first inning, OSU got several players on base and even advanced a runner to 3rd base.  Jones managed to get out without giving up a run.  While Cal wasn't able to get a hit until the 4th inning, Jones was playing fast and loose with the bases.  Things got very nerve-wracking in the top of the 3rd inning.

Oregon State had runners on 1st and 3rd with 1 out.  It looked bleak.  Then, this happened:

Read that again.  OSU player out at 3rd.  Catcher threw to 3rd base to catch the OSU player stealing.  You'll notice early in the play by play that the T. Smith in question here was already at 3rd.  So, how did he get out trying to steal a base he was already at?  It was a very interesting play.  OSU apparently called a suicide squeeze.  For those not "hip" to the baseball lingo that means that the runner on 3rd base broke for home as soon as the pitcher pitched the ball.  The batter's job was to lay down a bunt, so that the ball was a handful of feet away from both the pitcher and the catcher just when the runner reached home.  It's called a suicide squeeze, because if the batter screws up the bunt (or completely and totally fails to even make contact as was the case here), then the runner is stuck out in no man's land running towards a catcher gleefully holding the ball.

That's this Cal team for you.  Just when it seems that things are about to fall apart, they manage to pull victory from the jaws of defeat.  Just another day at Evans Diamond, I guess.

Oddly enough, that might not have even been the weirdest part of that play.  While all the hubbub on the 3rd base line was occurring, the runner at home was breaking for second.  He made it there easily.  This seemed to really upset Cal Head Coach David Esquer.  He came out and started barking at the home plate umpire.  I wasn't entirely sure what was going on, since Cal had just had a rather impressive play on defense there.  This also reflects, interestingly, that OSU did not have a lot of faith in its offense.  It felt that it had to do a desperation force play at home to get a run in the 3rd inning!  Suicide squeezes are generally done later in the game when you just need that one run.  Not in the 3rd when it is tied 0-0!

NorcalNick:  My only guess as to the rationale behind a suicide squeeze so early is that OSU has been struggling to score runs lately (no more than four scored in any of their last 6 games) and the Beavers may have felt that with the way their starting pitcher Tanner Robles played in the first three innings, only a few runs would be enough to win.  How wrong that idea would be!

But in those first three innings Cal looked over-matched at the plate.  Robles was a legit prospect out of high school and he looked the part for three innings.  Four Bears struck out and Robles allowed no hits, or even well struck outs.  Luckily he wouldn't stay unhittable for long! 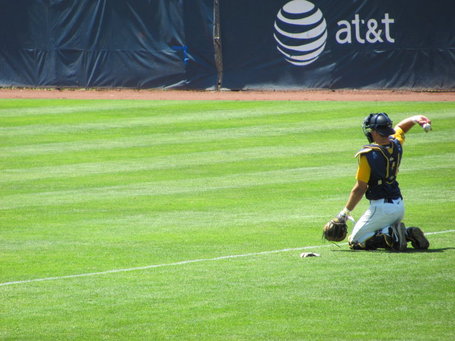 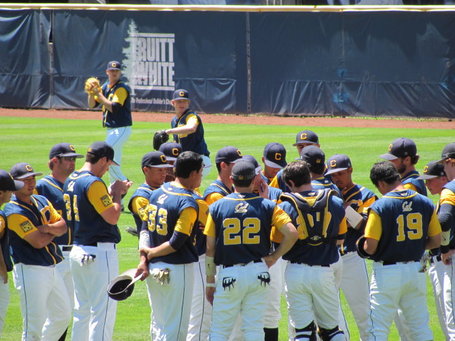 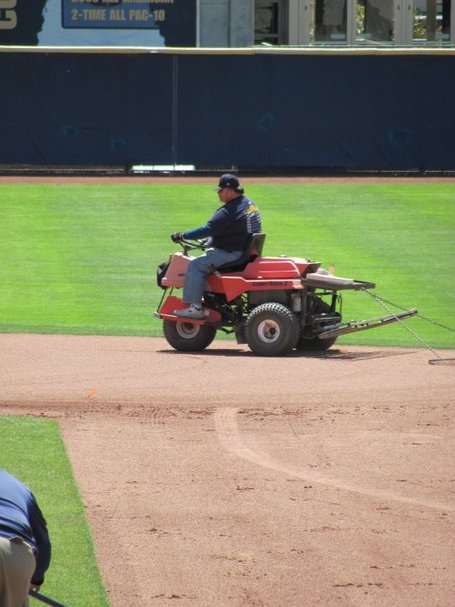 Unfortunately, it appeared that Jones' magic(k) might have run out just one inning later when OSU broke through for 3 runs with 4 hits.  This was the point in our metaphor when the Cal team's acne disappeared, it's voice dropped, and it started dating the head cheerleader.  After Jones gave up those 3 runs, Cal scored 14 runs in the next 4 innings.  Just look at the play by plays: 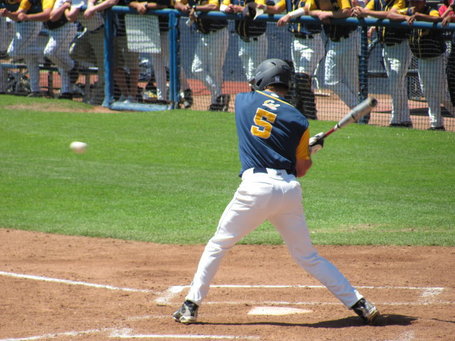 Here, Cal used some small ball.  A few singles and a walk loads the bases with just one out.  Then, Chad Bunting, hits a sacrifice fly to get Cal on the board!  They weren't done there.  Danny Oh, the hero of the UW game from Cal Day, hits a solid single to right field, scoring two more.

NorCalNick:  It was a great rally for many reasons, but the unsung play was definitely Devin Rodriguez's walk to load the bases.  Rodriguez started off the at bat with two quick strikes and he looked overmatched.  But he stayed calm and fouled off a number of crazy pitches, many that were almost in the dirt.  The AB lasted somewhere between 10 and 15 pitches and if Devin had given in and stuck out Cal probably would have gotten nothing out of the inning. 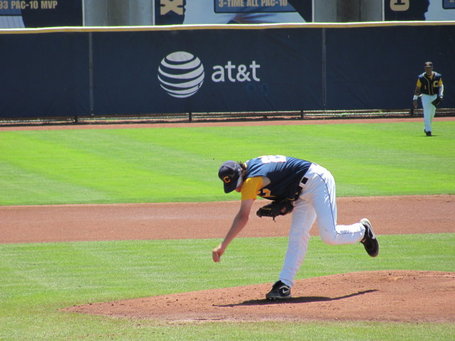 So, OSU puts up 3 runs, Cal answers immediately.  When OSU put up another run in the 5th inning, Cal responded with a home run from 3b Tony Renda.  So, after 5, it's 4-4 tied.  Jones hasn't played his best baseball, but is keeping Cal right in the game.  That's when things started to really fall apart for OSU.  Jones mows down OSU in the 6th, giving up only 1 hit.  Then, Cal scores 4 in the bottom of the 6th:

Chad Bunting hits a double, gets moved over by Danny Oh and then a solid single brings him in.  Three more singles and a walk loads the bases up, with a few runs already in.  By this point, OSU had made a few pitching changes.  They even brought in a pitcher for two ABs.  He gave up a RBI single and then walked a guy.  He was done. 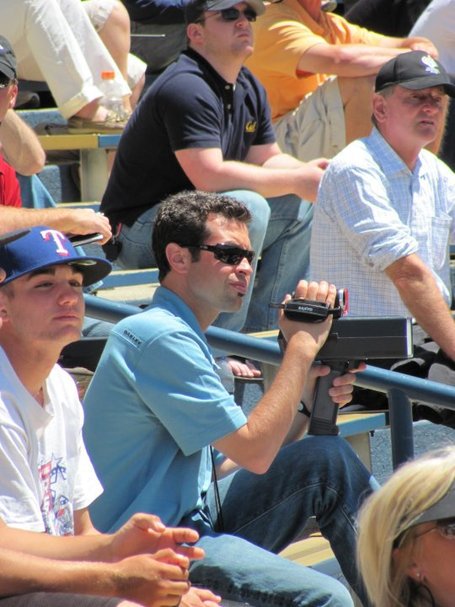 By now, it is 8-4 Cal.  That's a pretty good lead, right?  Not for the Cal Bears!  Hoping to get a great seed in the post-season tournament, they turn on the juice, scoring 6 more runs in the next inning:

They start off with two quick outs sandwiching a Danny Oh double.  So, all six of the runs were 2 out runs, which is great to see.  Cal loads up the bases with 2 walks and then a single knocks in two more runs.  There are 2 wild pitches in this sequence, so OSU was definitely shooting itself in the foot.  Then, Cal decided to stop manufacturing runs with walks, singles, and the always dangerous wild itch.

NorCalNick:  What made Cal's offensive onslaught in the 4th-7th inning so impressive was how everybody contributed.  Of the 1-8 hitters in the Cal lineup, all but one recorded a hit, each reached base and scored a run at least once and 5 had two or more hits.  Eight different Cal regulars are hitting .325 or higher on the season.  There's incredible balance in the lineup and there's rarely a chance for a pitcher to have a break.  Cal can string together hits like few teams. 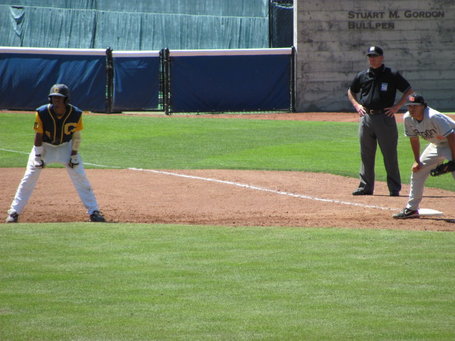 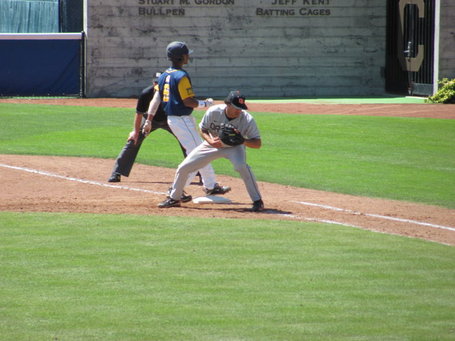 Brian Guinn, who had 3 hits on the day, avoids the pick off

Chadd Krist hits a home run, knocking in the last 2 runs of the day.  Cal is now up 14-4.  They cruise easily to the end of the game, having won the first two games of the series against the once back to back national champion Beavers (who had a very impressive fan turn out).

NorcalNick:  The Krist homer was the most impressive of the game - that dude has some power.  The ball got over the left-center wall in a hurry and was a perfect offensive cap to an impressive performance from Cal's bats. 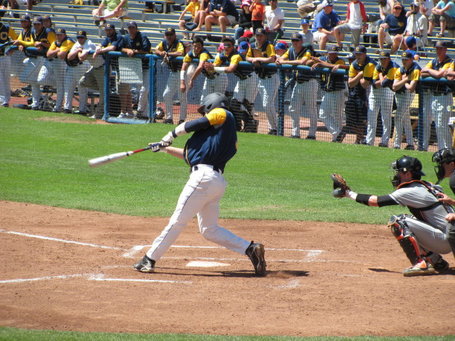 If I had to choose a hero of the day, it'd be tough.  Justin Jones showed some good stuff, but also gave up 4 runs in 7 innings, which is not a quality start.  He did get the win, which brings his record to 9-3.  According to the official game recap, this is rather impressive:

Jones' nine wins is the most for a Bear since David Cash tallied 10 wins in 2001.

NorcalNick:  I didn't get the best idea of what Justin can do on the mound, but I definitely saw a few sweet curve balls drop into the zone.  Justin probably didn't have his best stuff, reflected in a low strikeout total (2), but he had good control, generally minimized the damage of the runners he allowed and was supported with solid defense behind him.  In the first few innings he got outs out of some well struck balls, but his work in the 5th, 6th and 7th was excellent.

When you score 14 runs, there are going to be many offensive stars, so picking one is tough.  3rd baseman Tony Renda (who also led off) probably is the best player to choose.  Here is his line: 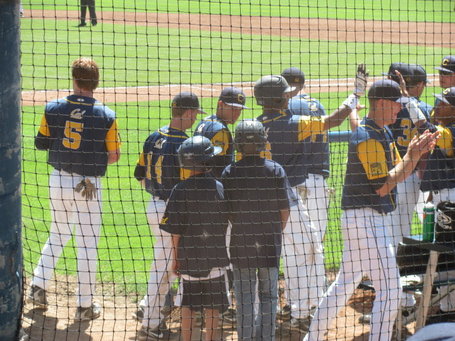 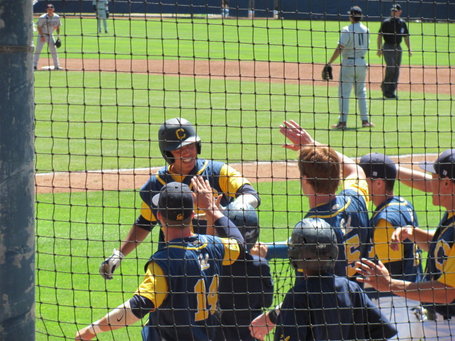 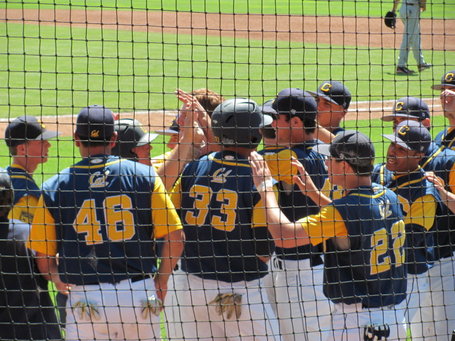 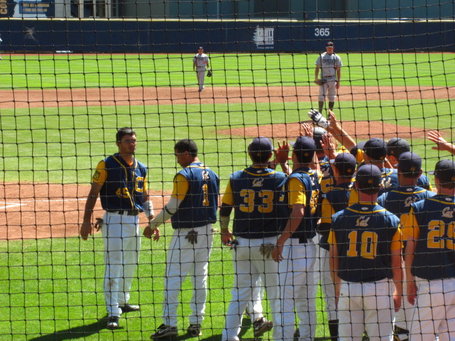 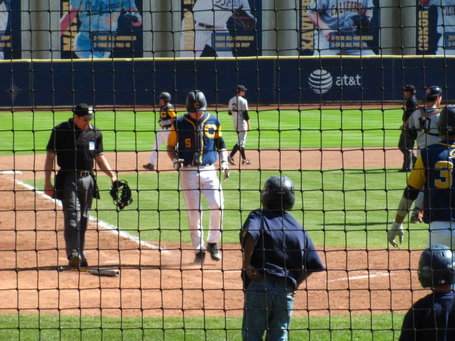 Even though it was a hot day, Cal's bats seemed cold to start the day.  They soon heated up and put up a lot of crooked numbers.  No matter how you cut it a 14-4 victory is a good day for Cal baseball.  GO BEARS!