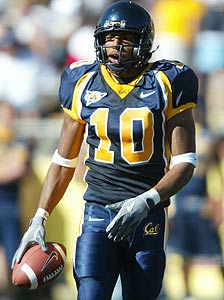 Makonnen had a fantastic 2002 season as he became Kyle Boller's main target, hauling in 54 catches for 682 yards (highlighted by a 7 catch, 136 yard, 1 TD performance against the eventual Pac-10 champion Cougars, 5 catches and 68 yards in the upset over ASU, and 7 catches in 69 yards in the Big Game). Before foot fractures sidelined him indefinitely, he managed a 7 catch, 104 yard performance in the USC upset, and had a huge touchdown grab in the second overtime. However, he could not recover his stride during the 2004 campaign, and he's now more famous (infamous?) for a catch he didn't make rather than one he did. He did finish his Cal career admirably, with 8 catches and 99 yards in the Holiday Bowl defeat to the Red Raiders.

As for Toler, he walked on and stepped into Makonnen's role in 2003. Although he didn't stir hearts the way Vinnie Strang did, he was infinitely more productive and was an able companion to McArthur. Four catches for 81 yards and a touchdown in the USC upset. A great performance against the Bruins, scoring the game tying touchdown with 11 seconds left to force overtime. Six catches, 84 yards in the Insight Bowl, including the catch that set up the game-winning field goal.

After the jump, take a look at our top five receivers of the decade and make your own top 5 list. Also, in our other All-Decade posts, check out the greatest Cal running backs of the past decade! 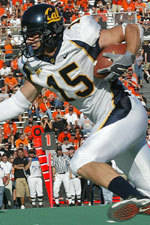 You've gotta feel for poor Chase. He tore his hamstring in 2002 and redshirted the season. Suffered from groin and hip injuries and tore his right ACL in his ankle in 2003. Managed to stick appendicitis through all that.

Then he caught 5 passes for 149 yards in the Insight Bowl. And it looked like he was finally breaking out during the banner 2004 year, highlighted by a 5 catch, 176 yard, three touchdown obliteration of Oregon State. Through his first three games he was averaging an obscene 32 yards per catch.  He was Desean before Desean, a true playmaker and a talent that was ready to tear the Pac-10 up.

But it wasn't to be. He tore another ligament in the Coliseum. Worst of all, he was thirty six minutes over the mandatory NCAA limit for a sixth year (similar to what Tepper got last year), effectively ending his career as a Golden Bear. Just no breaks.

At least he gets fifth on this list. Cold comfort. 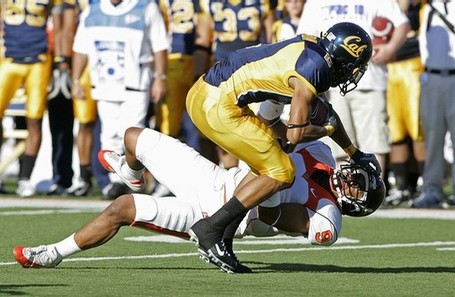 In terms of pure volume, Jordan is probably the most accomplished of the Golden Bears on this list. He played all four seasons, caught a pass in 42 consecutive games (a record that should hold for quite some time), 7th all time in Cal receptions, 9th in receiving yards. He was the perfect second or third option on teams that had brighter stars ahead of him.

I'm pretty sure we'd all love to have him back though. He had his moments, like the 11 catch, 192 yard scorcher from Joe Ayoob in the rout of Washington. He was Nate Longshore's main target in the 2006 UCLA victory--5 catches, 80 yards, two touchdowns, including a 44 yard streak that put Cal decisively up for good. His debut starting performance was one to remember--7 catches, 116 yards and a TD in the 38-0 blanking of ASU. He finished off his career in style, with 4 catches and 99 yards in the Big Game (including a gorgeous rainbow from Longshore off double action) and a ridiculous 6 catch, 148 yard, 2 touchdown performance in the Armed Forces Bowl (he had to contort his body to find Kevin Riley's throws on that day).

And like we've said before, the man gets all the best photos. 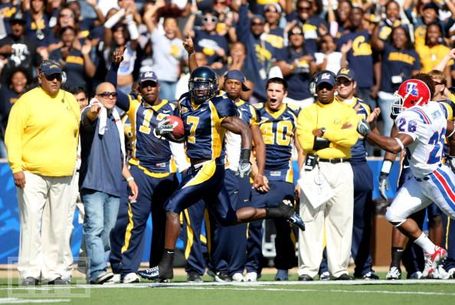 Tough to choose between four and three on this list. Jordan had the better career stats, but Hawk was the better player. When defenses loaded up on Desean, the Hawk prospered. He took off in 2006 with 9 catches and 125 yards against Minnesota, 6 catches for 128 yards in the shredding of Oregon State, and 6 catches for 99 yards in the Washington comeback.

Finally, his performance against Oregon State (9 catches, 192 yards, 2 touchdowns) is one of the greatest Golden Bear performances no one will ever talk about (for obvious reasons--no one wants to relive that game). He was full of highlights in 2007, and was one of the few players we can look fondly back upon that lost season. 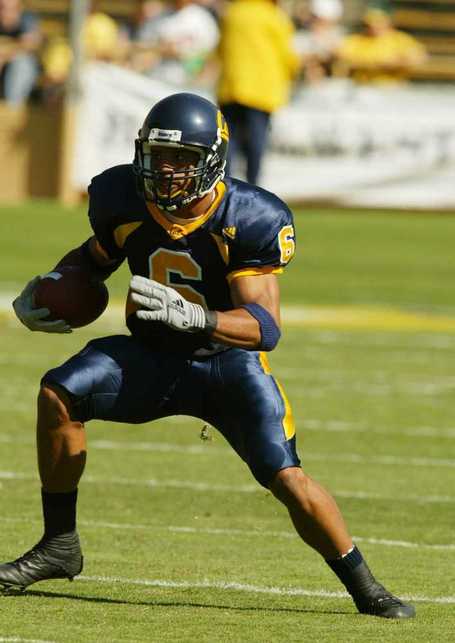 There was no way McArthur would be as dominant in 2004 (not with his mates going down with injuries, not with defenses keying to stop him, not with Rodgers locked in to find whomever, whereever). He finished with a modest 57 catches, 862 yards and 7 touchdowns, but compared to 2003, he might as well have tiptoed through the season. Barely any buzz for the guy who kept chugging it in. Oh yeah, did we mention that strained oblique he played with? It's funny how people forget how much of a difference he made, and were so blindsided by the 2004 Holiday Bowl fiasco.

He's Cal's current all-time receiving leader in both receptions and yards. In any other decade, he would be #1. 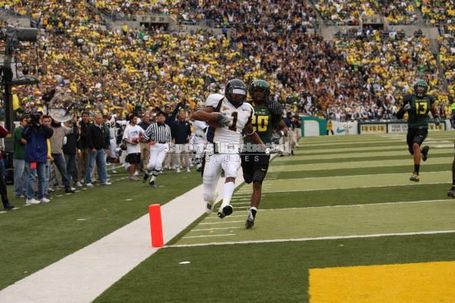 The question again: Do you reward production, or talent?

McArthur was the chugger. He was inglorious. He dug into the trenches and did his job. If he hadn't broken his leg, he'd probably still be chugging away in the NFL, making some team very very happy.

Desean? He's Audie Murphy. He's the star. He shined brightly. He made plays. He was the Human Highlight Reel on turf. And as his career progresses, it's looking more like he'll be Jeff Tedford's greatest recruiting coup.

The plays are what you think of first. The 77 yard punt return on Tennessee where he reversed at full speed and came right back at them. The catch on top of the Furdie's head in the 2005 Big Game. His fake one way, go the other move in the 2006 Oregon game (on Jarius Byrd I believe, who also got owned in the photo above). The ridiculous contortions to find Riley's overthrow in the Armed Forces Bowl. You can come up with your own playlist.

Most fans remember him for the punt returns (and for good reason). But the returns submerged one thing: He was a damned good route runner. And he put up some great performances in big games. 10 catches for 128 yards and a touchdown in the epic UCLA game where MJD was running ripshod. 6 catches for 130 yards and 2 scores in the Las Vegas Bowl,  7 catches for 114 yards and 3 scores against Minnesota, 7 catches for 127 yards in the 2006 Big Game...listing these games doesn't seem to do them justice. You had to watch him to appreciate the talent. It felt like he was born to play football.

Additionally, he had his big games. He was almost our entire offense in the Arizona debacle, carrying a hungover Golden Bear squad to the cusp of the Rose Bowl--6 catches, 131 yards, 1 touchdown, plus a 95 yard punt return TD to boot (just needed a smaller toe). He took over the 2007 Oregon game with a second half for the ages; 11 catches, 161 yards, 2 touchdowns. Plus more pain for Jarius Byrd.

All of that elevates Jackson over McArthur. It's your chance to pick. Submit your lists (if you're having trouble viewing the form below, click here).