Share All sharing options for: Remembering The Seniors: Jerome Randle

TwistNHook:  When I think of Jerome Randle, I think of that UCLA game where he hit that shot from somewhere in the midwest.  I'll always think of Randle in mid-air arms outstretched as he shoots the ball from WAY outside the 3 point line.  And how he made so many of those shots.

Ragnarok:  I'll remember him making a lot of those shots too, but only because of his final two years.  Those are the memories of Jerome that we'll want to keep.  Of course, you don't have to think back too hard to remember Jerome as a freshman or sophomore, jacking up those shots, and as they drew iron (or even before) Coach Braun shooting him a look that said "What are you DOING, Jerome?!?"

Jerome wasn't always so accurate.  He wasn't always so automatic from the free-throw line.  But he worked hard to become to prolific, deadly shooter that he was in his final seasons, and for a Pac-10 Championship, I'm sure he'd tell you that the countless hours in the gym were worth it.

NorCalNick:  My first memory of Jerome was when I first saw him on the court his freshman year.  I didn't follow recruiting at the time, so I knew nothing but his name when the game started.  When my wife first saw him she exclaimed 'who let that 13 year old boy onto the court?!?  why does he have so many tattoos?"  His stature immediately made him her favorite player.

Two games come to mind as his 'defining games.'  The first was Jerome's air-raid destruction of Arizona in the desert in 2009.  Cal came into the game with a god-awful losing streak in Tucson and needing a win to secure an NCAA tournament bid.  Jerome just toyed with Arizona's zone defense, hitting 8 threes from every possible spot on the floor.  It was unbelievably cold-blooded and it exorcised many old Cal demons.

The second was Jerome's performance at home against Washington his senior year.  the game was (prematurely) billed as almost an early season conference championship game, and Jerome was playing to redeem a lackluster performance in Seattle.  He managed to dominate a game without relying on the three ball - 9 of his 12 FGs were from inside the arc.  He abused a few different solid UW defenders with crazy ball handling moves - a few of his behind the back dribble drives were breath-taking.  Jerome became so much more than a deep threat in 2010 and this game was the culmination of that.

HydroTech:  I'm not a big basketball fan, but watching Jerome Randle reminds me of the AND1 team.  He had such awesome dribbles, behind-the-back dribbles, and spin moves - just like the AND1 team.  Jermone Randle is like our very own Hot Sauce. 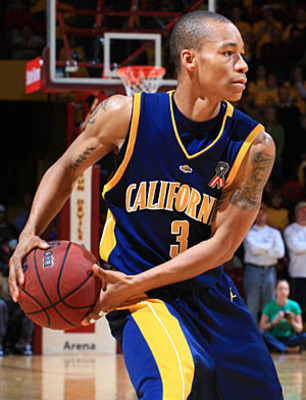 What jumps out at me as most impressive is the FT%.  There are a lot of impressive numbers there.  But FT% at 88.1% overall in his career with a 93.3% in his last year is very impressivce.  It looks like his junior season might have been the best.  He had 50% Field Goals percentage with 5 assists per game.  The numbers, save for the Free Throws, were slightly down the next year.  Oddly, he scored more points in slightly less time.

What are your thoughts on these numbers????

NorCalNick:  I think the field goal percentages and points per shot over his career are pretty revealing - Jerome made a huge and shocking jump in production from his Sophomore year to his Junior year and probably took the Pac-10 by surprise.  I certainly remember being shocked by his sudden ability to nail every jumper from any spot on the floor along with a sudden ability to drive the ball and score despite his height.

That his percentages decline in his senior year is more a reflection of the attention he received from defenses attempted to stop him specifically (with everybody throwing a variety of zones at Cal to try to disrupt him).  That and having three other teammates fully capable of scoring 20+ points on any given night and Jerome was relieved of some of the scoring burden.

Avinash:  Randle's evolution as a player was remarkable. When I first watched him sophomore year I cringed watching him run the offense. I don't play much basketball, but when I do I'm usually the point guard, and the things Randle did are NOT things that would make my teammates happy.  The shots themselves weren't that bad. I'm guessing if he was taking them in the first place he was hitting them in practice, and the next two years proved he could make those shots.

No, it was the lack of ball movement and inability to get the ball to the bigs that really exasperated me. The process of watching our plays developed was chaotic, and not in an enjoyable Nellie-ball sort of way. You could see the team unravel during conference play as they ran into smarter and more efficient teams. That's the point guard mantra--run the offense, make your teammates make happy. Bad point guards lead to bad teams, and that was what Cal was in 2008.

(The most curious thing was that Randle and Ryan Anderson never really gelled. Although people opine what would've been if Ryan had returned for a year (or two) with Monty, Jerome probably would've left as he was already on the fence after the Braun firing, and we'd have probably had two years of Nikola Knezevic running point guard. Think we're Pac-10 champions this year if that happens?)

His maturation was exceptional under Monty though. First he got the alpha dog streak as the team's on-the-court leader in his junior campaign. That he went from an inconsistent shooter shooter to one of college's most efficent offensive players (53rd in the nation in 09) in a year without great bigs to set picks for him lends credence to Montgomery's teaching methods. Amazing what putting a system in place does for good players. 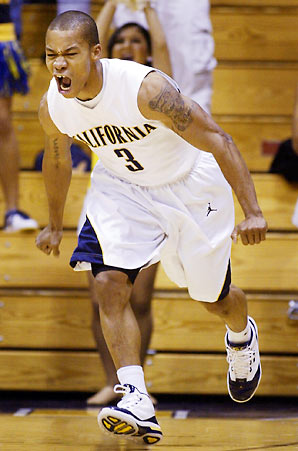 Second, his endurance for a guy his size was exceptional. He played an average of 35 minutes the past two seasons, and that's including blowouts. And it wasn't like the guy was taking plays off either--he handled the ball on over a fourth of our possessions the past two seasons. It not only underscored the importance of Randle, but the faith Monty had in letting him play those long minutes. It wore him out last season, but his performances were solid from beginning to end this year.

Finally, he embraced his teammates and ran with them as they ran with each other. Although his 2009 campaign was more spectacular than his 2010 season, I felt he played even better this year. He sublimated his individual talents in search of the team goal, which was the conference crown. The final stretch of the Pac-10 season (where they won nine out of their last ten games) was perhaps the best basketball he ever played as a Bear. He stepped up when they needed him, he stepped aside when others were ready to carry the load. And they got that conference ring. 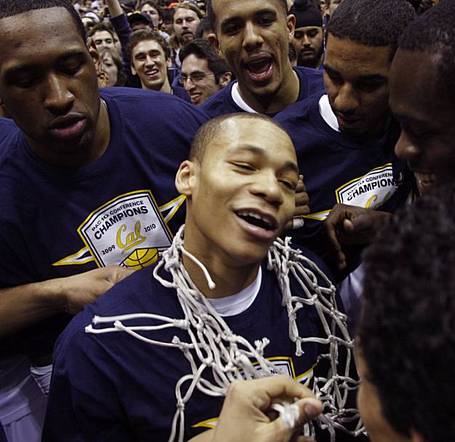 CBKWit:  I first met Jerome Randle in the summer of 2006.  I had just graduated and was clinging to my campus tour guiding job for a few more months, and Randle was on campus for Summer Bridge.  I led my tour group to Haas Pavilion, and as we walked up the steps, Randle exited the building.  I don't obsess over recruiting like a lot of fans, but I recognized Randle immediately; i'm not quite 5'8, and he was shorter than me.  I said something like "You're Jerome Randle, right?  Point guard from Chicago?"  He lit up, a huge smile on his face, and said "Yeah!".  I'm guessing it was the first time a fan had recognized him on campus and he was, to borrow an old phrase, tickled pink.

Randle was not a good player his first two years.  The first piece I wrote for the goldenblogs as an official writer was about Cal '07 Big Game loss and the basketball team's comeback victory over Missouri that same night.  I recounted that game following Cal's victory over usc in January this year:

"As a sophomore, Nikola [George Michael Knezevic] led the charge in that game both offensively and defensively while Randle, also a sophomore, turned the ball over a lot.  Randle will finish his career as one of Cal's all time leading scorers, while Nikola's best game in more than two years has a line of 14 minutes, 2 points, and 1 rebound.  Those stats do not nearly do justice to the impact that Nikola had on Saturday's game [against USC], but it's a pretty large understatement to say that Randle has been the better player throughout his Cal career.  Someone watching that Missouri game two years ago would have had difficulty predicting how their careers played out."

We'll all remember Randle for his unbelievable shooting.  I recall watching AJ Diggs, wide open just outside the three point line, rising up to shoot while I screamed "Nooooooooooooooooooooo!!" at my TV.  Randle was the absolute opposite - whenever he shot the ball, even if it was 7 feet behind the arc, I was positive it was going down.  As long as Randle was shooting in rhythm, there wasn't really a "bad" shot for him, with his unmatched range and his impeccable form.

Bitter UW fans complained (and bitter Stanfurd fans would have, if there were any Stanfurd fans) about Randle winning the Pac-10 player of the year award.  I'd say both Fields and Pondexter had better stats, but Randle was the most valuable player in the conference.  Maybe Stanfurd only wins a game or two in Pac-10 play without Fields, but it's not a long fall from 8th place to 10th.  And if Pondexter was truly the most valuable player in the league, why could he not lead the deepest and most talented team in the conference to a Pac-10 title?  Maybe that's more of an indictment of Lorenzo Romar, but Pondexter did not dominate games and pull his team to victory like Randle did.  No, Randle was the MVP this year and led the Bears to our first Pac-10 title in 50 years.  Thanks to "The Bulldog" for his remarkable career.