Share All sharing options for: Ranking The Big Games Of The Decade: #5 2005

The Big Game is where Cal heroes are made, where names are put on plaques afterwards.  Plaques!  Players whose talent bubbles up for one game of greatness can cement their name for an entire career of greatness.  With plaques!  Steven Levy, Jewish Athlete Of The Year at Don Bosco Prep in New Jersey, is one such player.  In the 2005 Big Game, Steve Levy had these numbers:

The story of Steve Levy's career, besides his glass smashing arm, was his Big Game arm.  Most notably on a 56 yard TD bomb to a young DeSean Jackson:

Join me after the jump for more memories of the 5th best Big Game of the Decade, the 2005 Big Game.

Honestly, the story of the 2005 Big Game is one that would resonate with many Cal Big Game teams:  trying to salvage a rough patch of the season.  Like many years, Cal was coming into the Big Game off of a loss.  And not just any loss, but one of the roughest losses of the year (a fairly rough year). The story of that brutal USC loss really starts many weeks earlier with the Sacramento State game.  Cal dominated the game, 41-3 with Marshawn Lynch running for almost 150 yards.  However, it was ultimately a Pyrrhic victory as one QB got injured, another proved himself to be wholly incompetent, and the third was, well, the best Jewish athlete in all of New Jersey:

Jeff Tedford's best quarterback probably is out for the season. His junior college project couldn't hit the broad side of a receiver, and California finished the season opener behind a third-string passer who played fullback last season.

No wonder the 19th-ranked Golden Bears and their coach didn't look particularly excited about their 41-3 victory over Sacramento State on Saturday.

Tedford's reputation as a quarterback guru is about to get its toughest test yet: Nate Longshore, the redshirt freshman who won the starting job over Joe Ayoob, broke his leg near his ankle late in the first half. He'll be out at least three months - and when Ayoob got his first chance to play, he threw 10 straight incompletions.

An injury to Nate Longshore forced Joe Ayoob (supposed 5 star superstar JC transfer) into action.  Here at the CGB, we like to be positive, we like to avoid the debbie downer negativity that seems to permeate the intertubes, but the simple fact is that Joe Ayoob sucked.  There's no real other way to describe it.  He was bad.  As in not good.  He had his moments, like leading the team to a great victory over Washington:

Joe Ayoob overcame a shaky start, picking apart Washington's secondary for four first-half touchdown passes and leading No. 16 California to a 56-17 rout of the Huskies on Saturday.

Coming off an 0-for-10 debut against Sacramento State, Ayoob was intercepted by Darin Harris on the game's opening play and missed on his first three attempts.

Once the junior found Robert Jordan on an 11-yard completion with 9:47 left in the first, Ayoob settled into a rhythm, and showed the talent that made him the California junior college offensive player of the year last season.

He finished 17-of-27 for 271 yards, and attempted just seven passes in the second half for the Bears (2-0, 1-0 Pac-10). Jordan was his favorite target, catching eight passes in the first half, three for touchdowns. He finished with 11 catches for 192 yards.

However, once Cal got into the real meat of its schedule, his confidence just shattered, along with any modicum of accuracy.  From October 2, 2005 to November 18, 2005, Cal won just one game, a rather impressive comeback win against a mediocre WSU team.    However, there were still brutal losses to Oregon State, Oregon, and USC in that time.  The losses to the Oregons, in particular, were rough as having even a halfway decent QB would have probably led to wins.  The USC game, however, was the real feather in the cap of the Joe Ayoob era.  I remember getting to that game really early and watching Pete Carroll throwing the ball around with about 45 minutes to go before kick off.  While most coaches might be game planning or whatnot, Carroll was loafing about, enjoying a cold, but sunny day.  USC was the #1 team in the land and would go on to nearly beat a much worse Texas team, thereby proving it truly was the greatest football team ever.  Or whatever bill of goods ESPN was trying to pitch at the time.

In response to USC's amazingness, Cal was, well, Cal.  A team without a QB.  Ayoob's numbers on the day:

That doesn't include the four picks.  To truly get the tale of the game, take a look at the first drive of the game:

Running play after running player showed that Tedford had NO confidence in Ayoob.  Any attempt at building confidence was lost when Ayoob's first pass of the day was well off target and easily intercepted.  3 more picks and innumerable running plays later, Tedford finally had enough and put in former halfback Steve Levy in.  He immediately brought a spark back to the Cal Bears, going 4-4 for 38 yards and leading Cal to its sole TD on the day. 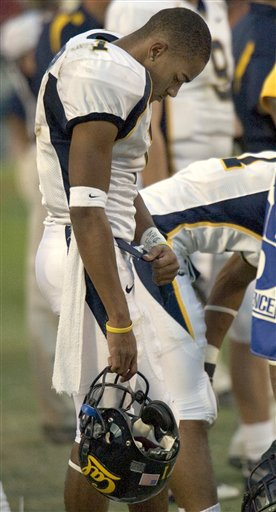 Coming off of 4 out of 5 losses, Cal needed Levy to pick up the slack in the Big Game.  He had all the talent around him.  Marshawn.  Forsett.  Tha1. Robert Jordan.  Lavelle.  But as seen with Joe Ayoob, a team without a QB isn't much at all.  Fortunately for Cal, a team without a running game isn't much at all, either, and Stanford's 16 total rushing yards on the day just wasn't gonna get it done.  Yes, just 16 rushing yards.  Considering that the score was solely 6-3 at half, it wasn't as if Stanford had to abandon the run game or anything.  They rushed 37 times!  37!  That is a .4 yard per carry average.  Uh, pretty good.

Let's take a look at the game stats:

Of course, if you look at the Stanford run stats, you'll see that the 37 rush attempts is slightly misleading:

Approximately 19 of those 37 were scrambles by Trent Edwards and T.C. Ostrander to avoid the Cal sack attack.  The Cal D had 9 sacks on the day and 17 tackles for loss!  A few of those were on actual Stanford running backs, but the VAST majority were against the two QBs.  It was a blood bath out there.  This blood bath was exactly what the doctor ordered for a shaky offense.  Here is a video of one such Ostrander skull crush!  Let you think Ostrander had all the fun, here is Brandon Mebane introducing Trent Edwards to Stanford Stadium:

Wait, wait, wait, we can't forget this video of the Cal D dominating some more:

Looking at the scoring summary, you can see that it took a long while for Cal to break this 27-3 victory wide open:

It was just 6-3 at half and 13-3 at the end of the 3rd quarter.  Still easily failable situations for even the most optimistic Cal fan.  It was not until Marshawn scored a TD on 3 of his 123 yards on the day with 7 minutes left in the game that Cal fans could start to breath easy.  Then, the cherry on top:

Cal runs the ball right down Stanfraud's throat and then pulls out the razzle dazzle for a halfback option from Terrell Williams (Mr. Baylor TD himself).  It's good to Craig Stevens (whose younger brother is apparently now playing on the team)!  The 2005 Cal team combined bone crushing defense with just enough offense thanks to a resurgent running game and one delightfully New Jersey athlete.

CBKWit: I was Drum Major of the Cal Band in 2005, so this Big Game carries weight for me beyond Steve Levy and DeSean Jackson.  One of the performance flairs for the Cal Band Drum Major is to leap/hurl yourself over the point of the Big C wedge.  It started one year in the 90s, when the drum major was 6 feet plus and the point was tiny, but like a lot of things in Cal Band, it became tradition, regardless of the fact that it was no longer practical or relevant.  I'm a healthy 5'7 and the point in 2005 was my good friend, pushing 6 feet.  During rehearsal the night before the first game of the year, against Sac. St., I attempted to leap over my friend and ran right into his back.  We collapsed to the Memorial Field turf and the entire band stopped playing to laugh at me.  Bob said to me later, "I've never seen that happen."  I spent the rest of the evening in a slight panic, worrying about running over the point the next day and seeing a video of it on SportsCenter.  Fortunately for me, I never failed to clear the point during our pregame shows.

To go big for Big Game, I had the point carry out my baton and toss it to me as I leapt over him.  I caught it, and was feeling good.  I strutted down the field and threw the baton.  It was the best toss of the year, sky high and straight...but it was too perfect.  It was rotating too fast, and I dropped it.  I DROPPED THE BATON, 10 MINUTES BEFORE BIG GAME.  The crowd groaned.  It was the first time I dropped the baton all year.  I decided I was not going to end the season and start Big Game with such an auspicious omen, and I resolved to throw it again.  Dropping it twice before Big Game would have certainly meant a loss for our Bears, so I caught the fucker.  It may be the ballsiest thing I have ever done.

Steve Levy was the hero and him wearing the hard hat and carrying the axe is the lasting image from the game.  Still, I remember the defense, holding the the Furd to 3 points and continuing a trend, started the previous year, of mashing the furd qbs.  It was a coming out party of sorts for Phillip Mbakogu who, until this year's recruiting class, was the highest ranked defensive end to sign with Cal during the Tedford era.  Mbakogu had a couple sacks in the game and ended the following game, the Vegas Bowl, when he hit the BYU QB as he released the ball, allowing Cal to intercept it.  Unfortunately, Mbakogu had some rare cartilage injury in his knee and never played in another game.  He was only a sophomore in 2005, and his injury was a major reason for the lack of pressure applied by the defense in '06 and '07.

TwistNHook: That, my friends, is how the Big Game can turn a Jewish, glass smashing halfback into a Legend Of The Gridiron: 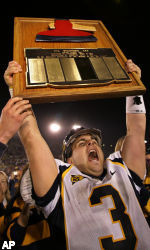 Quite the plaque!  GO BEARS!