We start with our summer-long look at the 2010 California Golden Bears football recruiting class. First up, the crown jewel, Chris Martin. 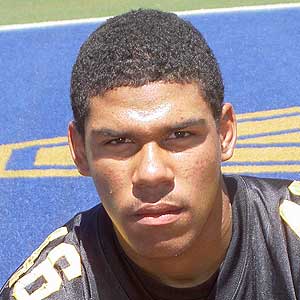 It's safe to say none of us expected him to be a Golden Bear as late as December. He was firmly Notre Dame until Charlie Weis got the axe after his Irish stumbled to the finish and underachieived for yet another season. Florida was a second option, but Charlie Strong's departure made that situation a little too unstable. So yes, the Bears got lucky that Martin decided to come home. The consensus by Irish fans was that Weis would probably get canned if he didn't win nine to ten games though, so most scenarios still point to the dominoes still falling and Martin still going.

After the jump, we'll get a clearer idea as to how Martin will evolve into one of Cal's best playmakers, and why he might not make the immediate impact on the field some fans seem to believe he'll make. Also, a scouting profile and evaluation from ttgiang15 and plenty of linkage from solarise.

Many Cal fans think Martin will immediately come off and establish himself as a starter; I'm a little bit more cautious. Adjusting from creaming offensive linemen at a decent but hardly dominant division in Colorado will be a significant change of pace from facing up and spinning around Trojan and Cardinal linemen. Even tougher will be switching to a 3-4 pro scheme, which I'm guessing will not be as easy to do.

For further support, take a look at the 2009 5 star OLBs and DEs according to Rivals.

Their combined totals in 2010? 48 tackles, 7 tackles for loss, 2 sacks, 1 fumble forced. Johnson was the most impressive of the four, but he was the only one to grab 20 tackles or more. Jenkins only had one tackle, and Bell didn't play at all.

A lot of this is just based on timing. Even the best talents can't really participate in Cal football practices until late July, and maybe seven-on-seven drills during the summer. It's just not enough time to get a feel of new schemes and plays. Martin might work his way into the lineup as the season wears on and his physical gifts mesh with the defense he's playing within, but starting outright against UC Davis? I would be very surprised.

Now you could argue that the Bears don't have a strong established linebacking unit like the Longhorns, Tide, Buckeyes and Gators did. But but with Cal having three returning starters in Michael Mohamed, Mychal Kendricks, and D.J. Holt, and several players like Keith Browner, Jarred Price and Steven Fanua likely to contribute next season, there won't be enough space for Chris to prove himself unless he literally blows the doors off in fall practice. To imagine Martin being anything but a spot player who can still display the high schools (rush situations off the edge where he doesn't have to deal with too many linemen).

Tale of the tape

ttgiang15, our resident recruiting video expert, gives us his take on Martin's tape, and seems to come to similar conclusions that Martin, while physically adept, still has a lot of technique issues to work on before becoming a premier Pac-10 defender.

Evaluation: Already possesses D-1 body in high school. Chris Martin is a monster tackler who always drives the offensive player backwards. He has incredible upper body strength. Great closing speed on run support, good speed for size overall. Because of height and competition, often tackles too high (shoulders), so he'll need to get better pad level against stiffer competition. On runs to outside, Martin has a tendency to leave his feet on tackles. (The front seven of a defense should only leave their feet outside the hash for shoestring tackles.) More active hands in senior film. Needs to do a better job at shedding the blocker--in most instances where he meets the O-line, the player with the ball meets Martin, and not the other way around. Grading him as a linebacker, only average mobility lateral to the line of scrimmage and slow to react to pass plays.

Projection: Taken at surface value, all signs point to Chris Martin playing immediately: already has the size and strength, is absolutely dominant in film, and with questionable talent on roster at WLB, Martin should have a realistic opportunity to contribute. But if he were to play this upcoming season, it will be in 4-3 alignment, or pass-rushing specialist as the outside linebacker a la Jarred Price. He has played LB extensively in high school, but most of the time it's within 1-2 yards of the LOS, and there's no footage available that actually shows him in pass coverage. It will take a lot more time than most realize for him to transition into full-time linebacker. The only way he is going to achieve starter status is if he can prove that he can play tight coverage. And not just opportunistic space filler like Keith Browner, but that he can be a respectable defender against the pass. In fact, down the road, I don't expect him to stay at linebacker at all. I project him as a defensive end (exclusively) or tight end, in the mold of Kavario Middleton (UW). He would be a great special teams player, blocking tight end for certain personnel packages, and fourth linemen on defense this upcoming season.

All props go to solarise for gathering these.

Julie Turner at ESPN wrote this excellent profile of Martin at Grandview while he was still a Notre Dame commit. It talks about how humble he is with his coaches, about how he integrates himself with the team, and how he leads by example.

In an interview with MaxPreps, Grandview's AD, Jon Hoerl, says Martin likes the 3-4 defensive schemes Cal runs, and is happy with the education the Golden Bears offer.

The Bear Insider article of his recommitment mentions how Martin started to sour on Cal his junior year before recommitting himself to the Bears his senior season. Ron Gould was his initial recruiter, and Tosh Lupoi and Kenwick Thompson worked with him near the end.

When asked by Glenn Dickey of the SF Examiner, Tedford believes Martin's role will be similar to Zack Follett's role at the start, and definitely thinks he'll contribute early. Although I don't believe he'll start, I definitely believe he'll show off his physical abilities in the pass rushing game his freshman year.

Bryan Kelly of Bleacher Report lists Martin as one of 50 freshman likely to be a true starter.

Here's a report from AthlonSports of Martin's involvement at the Gridiron Kings event. He played middle linebacker there, and how it allowed him to work better on his hip movement.

Formspring is a microblogging service that allows people to ask questions of other people and gives you the opportunity to ask them. Well, Martin has become one of its primary users. Somehow, Coach Tedford doesn't know of this yet, and, well, it's simply a blessing. Here are some of his sample responses.

What is the one thing that disgusts you?
Oregon's uniforms

If you were gay who would want to have a passionate affair with?
Mike Mo!

if you could describe "Stanford" in 3 words what would they be ?
B*TCH A$$ T3AM

you totally misused oxymoron. a good example of an oxymoron is act naturally or larger half. stop being a dumb jock
SO I PRESUME YOU ARE MR. PUSSY MAN??? CORRECT??? I DO APOLOGIZE..IT'S LATE AND IT'S HARDWORK BEING A "PUSSY" BUT HEY, IF YOU WOULD LIKE URBAN MEYER, JEFF TEDFORD, LANE KIFFIN, OR HERE IS A BALL BUSTER....NICK SABAN'S PERSONAL CELL PHONE NUMBER JUST MESSAGE ME AND I CAN PROVIDE THAT FOR YA. THANK YOU FOR THE CORRECTION BY THE WAY. AND I APOLOGIZE FOR BEING A YOUNG MAN THAT HAS EXCELLED IN ACADEMICS AND SPORTS AND WAS BLESSED ENOUGH TO RECEIVE NUMEROUS SCHOLARSHIP OFFERS BASED ON MY OUTSTANDING ABILITY NOT ONLY ON THE FIELD, BUT IN THE CLASSROOM. I TRULY DO APOLOGIZE.