(HT royrules for the video)

Ranking the Big Games is the first step in our offseason-long look back at one of the greatest decades in Cal sports. Our Big Game memories have been generally pleasant, so we hope you were willing to bear with us through those three horrifying losses. The rest of these lists will be a little bit more pleasing to the eyes.

We start with our most consistent position of the decade--Cal football running backs. Whenever you watched a Cal football game this year, you always felt the most confident that we'd get the run going. You can probably get a noticeable correlation between our team's performance and the strength of our running that day. Much of the credit goes to Ron Gould, who knows how to find and pick the best runners to succeed as Golden Bears.

This list was voted on by your CGB leaders. You too can get a chance to vote for the best running back of the decade, either by clicking here or voting on the Google Form after the jump! 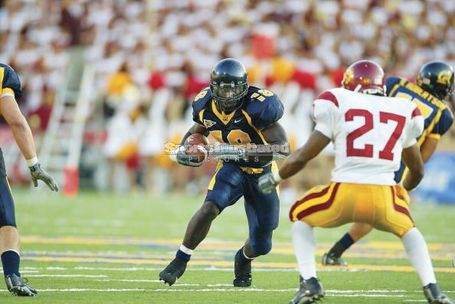 via cache4.asset-cache.net (from Getty Images)

In a decade filled with great Cal runners, Echi slips through the cracks. But he had his share of fine performances. Tore up the 2003 Trojans for 34 carries and 147 yards, with 182 yards overall. A 200 yard game against the Wildcats in a 42-14 stomping. Five hundred yard games and first team All Pac-10 in 2003.

Unfortunately, injuries never let him get on track, neither in college nor in the pros. But after being plagued by early academic issues, he managed to get his degree in sociology from Cal. 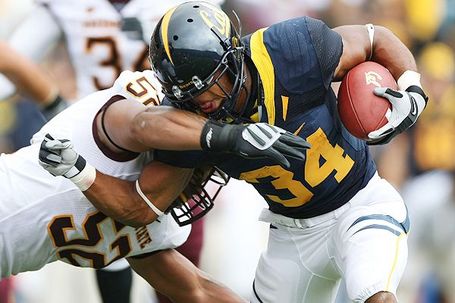 Shane is still coming into his own, but one could argue he was the most valuable second back of the two man platoons we deployed with Arrington-Lynch, Lynch-Forsett, etc. Only Vereen actually had to take over the running load for a substantial portion of those games with Best's injuries (starting one game last year, four this season), with Cal winning three of those five. Did I mention he played with a torn meniscus for the last three?

The Vereen era isn't over either. Who knows how far he'll leap on the 2010s ballot a decade from now. Shifty and grinding, he could provide his own share of spectacular as a starter. 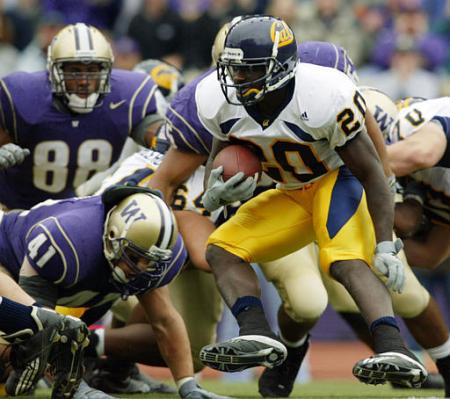 Played his first three seasons on some dreadful Tom Holmoe teams before finally breaking out with a thousand yard season in his senior campaign. As a four year starter, he saw action in every campaign. And he saved his best for last, providing us with perhaps the greatest individual Big Game performance of the decade.

Plus he got his degree. Civil engineering to boot. Went to grad school. True Golden Bear. 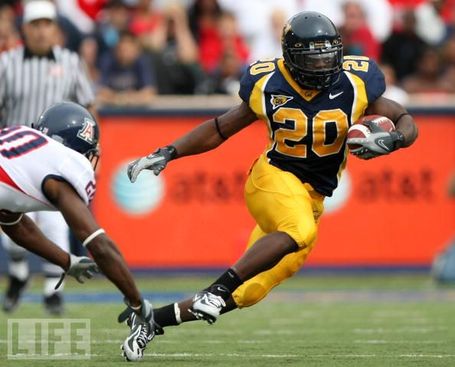 A strong second back (he nearly had a thousand yards in his 2005 season), the Force emerged into his own in 2007 with a solid 1500 yard campaign, keeping Cal's stagnating offense going when the rest of the team seemed to fall off efficiency-wise. Although his rushing totals were never spectacular, he was perhaps one of the best blocking backs we've ever had, along with an underrated pass receiver. Rated as one of the most elusive backs in the pros, we already knew how shifty and tough it was to bring Justin down at first contact.

His all-around ability has him tagged as the only Golden Bear certain to see playing time for an NFL team next year. 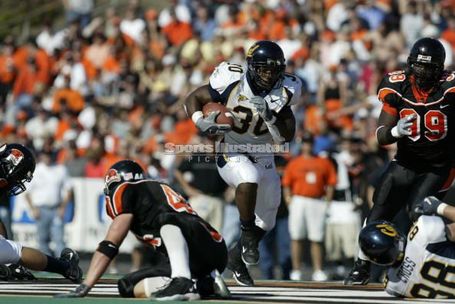 via cache3.asset-cache.net (From Getty Images)

Hard to decide where to rank JJ--the rest of these guys were better for longer periods, and Arrington undoubtedly had the best offensive line. On the flip side, Arrington submitted quite possibly the greatest single season in Cal running back history, dwarfing any other single season by any of the other guys on this list. Hell, it's the tenth best yardwise in NCAA history. Twelve games, all 100 yards and more, eight games of 160 yards or more, two games of 200 yards or more, another one of 250 yards or more...he was nothing but a model of consistency. When the hell are you ever going to see anyone rush for 2018 yards in 12 games again?

Curiously, he was snubbed an invite to the Heisman Trophy campaign. I don't get annoyed much by that stupid award, but JJ should've gotten his due to New York City. Rodgers was great, but Arrington was the motor of our team in 2004.

Still, third on this list feels right. And it was pretty unanimous among us.

via shuttersounds.thedailynathan.com (From The Daily Nathan)

There's very little we can add that we haven't mentioned in our Remembering Jahvid Best tribute, so we'll leave it at him being one of the most electric athletes to ever play at Cal. If he didn't seem to be a magnet for freakish injuries, he would've knocked down that 3000 yard mark in barely two seasons of starting play. He was the closest anyone ever got to replicating Arrington's production over a longer stretch. Too many good games and runs to remember. It was like imagining Usain Bolt play football. That's what watching Best was like.

Second on this list is no joke though. It's just too hard to topple number one. 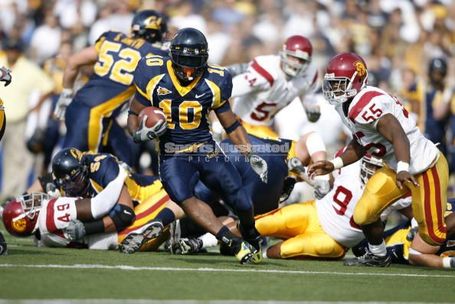 via cache1.asset-cache.net (From Getty Images)

Unanimous number one. Second leading all time Cal rusher of all time. 2006 Pac-10 Offensive Player of the Year. 17 100 yard rushing games. Spawned the Beast Mode phrase. Has his own rap song. The most impressive athlete Jeff Tedford has ever coached (and that's saying something).  Certainly the most pro-ready when he left, although it's hard to say what his future holds after some dubious lapses in judgment.

Nevertheless, when he was here, he was so freaking good. During Arrington's amazing 2000 yard season, there were times where Lynch looked BETTER as a frosh than JJ. He averaged 8.85 yards per carry and a 120 yard performance in the Big Game on NINE carries. And he just kept on going from there. He nearly singlehandedly brought the Bears their first victory in Autzen in two decades. He ran over the Stormin Mormons in the Las Vegas Bowl. Kept Cal's Rose Bowl hopes alive in the Washington comeback, stepping all over the Huskies and then driving the cart over them to add injury to insult.

In Gould's long and successful tenure as Cal's running back coach, he never coached anyone as good as Marshawn.

Now here's your chance to voice your opinion. Fill in the form below (or click here if you're having trouble seeing it) and rank the running backs. Good responses in the big box or in the comments will be used for the results post.