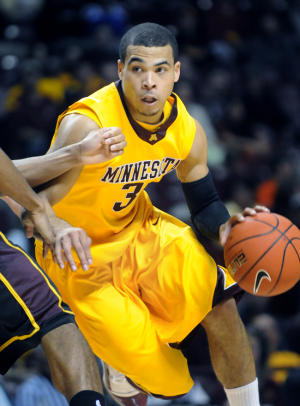 Justin Cobbs, a 6-3 point guard, has transferred to California from Minnesota, Golden Bear head coach Mike Montgomery announced Wednesday. Cobbs joins the Golden Bears after appearing in 34 of 35 games as a freshman for the Golden Gophers last season.

"We're really excited to add Justin to our program," Montgomery said. "He had a fantastic high school career. He won a state championship. He has a year of experience in an excellent program in the Big Ten. He should really solidify our guard position for years to come. He's strong, and he's a pure point guard. He can defend, and he knows how to run a club. He has all the things you look for in a guard. We're pleased to add him to our program. I'm looking to forward to working with these young kids in the future."

Cobbs averaged 2.1 ppg and 1.3 apg in 10.7 mpg last season for the Gophers. He scored a season-high seven points in 18 minutes of play in the Big Ten Tournament semifinals against Purdue on March 13.

Cobbs joins incoming freshman Emerson Murray out of Vancouver, British Columbia, as the two spring additions to Cal's roster for the 2010-11 season.

In accordance with transfer rules, Cobbs will sit out the 2010-11 season but will be eligible to play the year after. This being the final day of the spring signing period, it'll likely be the last move the Bears make for this recruiting season.

In the same pattern as Murray, Cobbs looks like a bigger, stronger guard who can provide greater endurance and ability to the floor. Monty's emphasis on defense seems to indicate he'll try and mold him into a Venoy Overton-type that can bring something defensively when their main point man (whether it be Franklin, Smith or Jorge in a year) is coming off the court who can give trouble to opposing points. He could be a great backup point guard and could help keep on fitting the long-term puzzle Monty seems to be assembling for his squad.

After the jump, more news about Cobbs.

Cobbs was rated by Rivals.com as a three-star recruit out of Bishop Montgomery HS in Torrance, where he played alongside incoming Cal freshman Richard Solomon in 2008-09. Solomon transferred from Bishop Montgomery to Price HS for his senior season in 2009-10.

Cobbs, who considered Cal out of high school before picking Minnesota, becomes the sixth player signed by coach Mike Montgomery this year, along with five incoming freshmen. That leaves the Bears with one vacant scholarship, which they likely will hold onto for next year, when only center Markhuri Sanders-Frison is scheduled to depart as a senior after the 2010-11 campaign.

Indeed, like many players who move far away from home, Cobbs is leaving to be closer to his original place in LA.

After weeks of rumors, the Gophers announced Wednesday that freshman point guard Justin Cobbs will transfer to a school that's closer to his home in Los Angeles.

The move is not surprising. Via social media outlets like Twitter, Cobbs, who averaged 2.1 points in 10.7 minutes per game, expressed his frustrations throughout the 2009-10 season.

Since he was recruited by Gottlieb a year ago (although he wasn't offered), it's not a huge surprise that Cobbs was pursued as a replacement for our recent losses.

Leading by one point with seven seconds left and their best player, Minnesota-bound guard Justin Cobbs, at the free-throw line, the Knights had to like their chances to win the Division IV state title.

But in a game of wild momentum swings, the last one was easily the biggest.

When Cobbs missed the front end of the one-and-one opportunity, Salesian's Desmond Simmons dribbled frantically upcourt but lost the ball. Guard Jabari Brown picked it up and fed sophomore Kendall Andrews underneath the basket for a layup at the buzzer that set off a wild celebration in which Andrews immediately ripped off his jersey and was mobbed on the court.

"You can blame it on me," said Cobbs, who finished with 24 points and had made all four free throws before his final attempt. "We shouldn't have been in that situation if I made the last two free throws."

The final play was indicative of how quickly things had changed all game, with Salesian (31-4) going on an 18-2 run in the first half and Bishop Montgomery (28-5) countering with a 17-0 run to close the second quarter and open the third.

What a tough situation for the young Cobbs and I feel really bad for him.  Eventually he'll move on, as most of us do, and high school sports will take a backseat to your college team.  But this is the kind of thing that will haunt a competitive player for a long time.  Not haunt as in negatively affect his play or destroy his confidence to the point he'll be incapable of picking up a basketball again.  According to Sid, Tubby was in attendance for this game, I wonder what he had to say to Justin and his family after such a difficult loss. I doubt it will do anything but make him better in the long run but he will never forget it.

Cobbs only played sparingly at Minnesota as a frosh, so discussion of him from The Daily Gopher are hard to come by. Here are some of the comments.

I really liked what I saw of Cobb, true PG, quick, didn’t set the world on fire but didn’t look out of place. I’ll be interested to see how he develops.

but I don’t think he was a future All-Big 10 player.