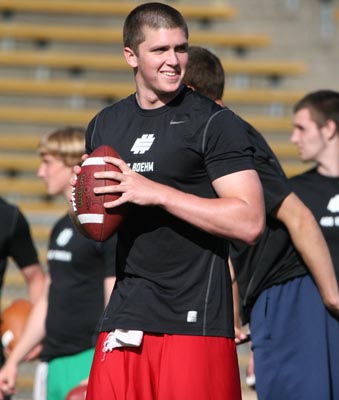 Following Darren Ervin and Mustafa Jalil, Kyle Boehm is your third pledge of the Cal 2011 class. A coveted quarterback from Archbishop Mitty of San Jose, CA, Boehm is one of only three quarterback recruits to receive a Cal scholarship offer up to this point. Max Wittek of Mater Dei (Santa Ana, CA) and Cody Kessler of Cenntenial (Bakerfield, CA) are the other two. Boehm pledged to Coach Ludwig this morning, choosing Cal over Washington (1).

"I knew I was getting close to making my decision and didn't feel the need to drag it out any longer. Cal has everything I could want in a school, and has a great combination of athletics and academics. The fact that it's close to home and my family can come up and see my games is another added bonus," he [Boehm] said.

Last fall he threw for 881 yards and seven touchdowns while also rushing for 861 yards and 12 more scores. - ESPN On the trail

Kyle Boehm (Cupertino, Calif./Archbishop Mitty) has a real nice arm, something we saw back in March. The ball didn’t quite jump off his hand the way it did when we last saw him, but he has great size, is well built and has taken most of his snaps from under center, which makes him attractive from a footwork and ball handling standpoint. - Tom Luginbill, ESPN / Scouts, Inc.

Kyle Boehm out of Archbishop Mitty (San Jose, Calif.) looks like a quarterback and said he’s up to 220 pounds on his 6-foot-4 frame. He made several nice throws, but was not as consistent as some of the other quarterbacks.

"I would really like to see a little more fire out of him, but I don’t think that’s his personality," James [Matthew, Elite 11 / Nike SPARQ Quarterback Coach] said. "He’s a solid kid with a nice frame and I think he’ll perform even better on Sunday [at the Stanford Nike Football Training Camp]." - Greg Biggins, ESPN / Scouts, Inc.

Boehm looks the part [of a QB] more. He’s big, strong, athletic, accurate and he’s run three different kinds of offense so Ludwig feels he’s a great fit for their offense -another sign that he plans to stick around.

Boehm’s release is much more like Aaron Rodgers. [Cody] Kessler’s is more like Tebows. That and the height difference are what I believe are the reasons for Tedford liking Boehm better.