Top-ranked women's crew won its third straight Pac-10 title (and its sixth out of the last seven). 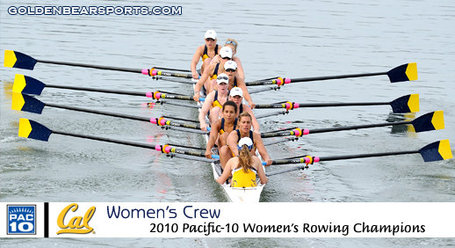 The No. 1 California women's crew won the Pac-10 Championship for the third consecutive season on Sunday at the 2010 Pac-10 Championships at Lake Natoma in Gold River, Calif. The varsity 8+ was the lone individual race the Golden Bears won, as Washington won the varsity 4+ and the novice 8+, and Stanford claimed the second varsity 8+ title. In the overall team standings, Cal edged past Stanford for the conference crown, 39.5-39.0, with Washington taking third with 31.5 points. Cal was also the only team to medal in each event.

The Bears led the entire race in the varsity 8+, holding a slim 1:31.61-1:31.79 lead over USC after the first split. Stanford took over second place in the second split and trailed Cal by approximately two seconds after the second and third splits. The Cardinal closed in on the Bears in the final split, but Cal held on for the victory over Stanford, 6:29.90-6:30.80, to win the conference championship.

After the jump, another writer tries to figure out what 2010 will hold for the Pac-10's most enigmatic team, water polo finishes third in the nation in its first postseason appearance, softball gets ready for the NCAAs