Last Monday, I asked Cal fans to predict the upcoming season using win probabilities (i.e. give us what they thought the odds were we'd beat Team X on our schedule). I was quite happy to receive numerous responses, as we ended up with well over 500 responses from our readers. Thanks to everyone for submitting your answers. This experiment should give our fans a healthy enough expectation of what next season will be like.

Indeed, the final average from our season indicates a return to the previous two seasons--a regular season finish of around 8-4, with the actual expected value of wins around 7.925, with a standard deviation of 0.86. So it looks like our fans are expecting a solid if unspectacular season, akin to 2008, where expectations were not a big part of the game.

In terms of the Pac-10, we ended up somewhere between a 5-4 and 6-3 conference record. Non conference wins were estimated at around 2.53, so the lean is a little bit more to the five rather than the six.

Finally, with regards to road and home, we might finally see our undefeated Memorial streak to teams not named Oregon State and USC snapped. Our expected home record is 5-2, meaning a road record of 3-2. However, looking at the data this way, it's hard to figure out where the losses would come, although it wouldn't be that tough to venture a guess when we look at the individual matchup win probabilities.

After the jump, closer looks at the numbers, followed by plenty of intriguing prognostications. If you want to view the full results and see what your friends and peers put down, here is the official Google spreadsheet with all the submissions included!

Quick submission notes before you move ahead to the good stuff.

Now the hard numbers and graphs (big ups to Berkelium for the graphs). 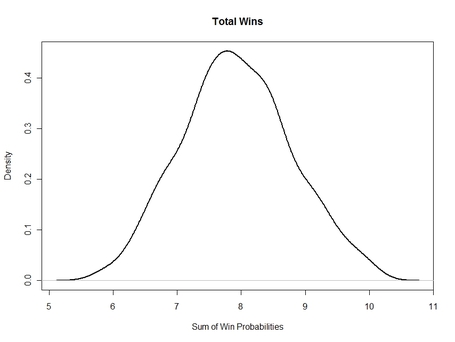 8 wins seems to be where everyone's coordinating themselves, with about one standard deviation (68% of the overall submitters) between 7.065 and 8.785 wins. So the seven to nine win platform seems about the same as before, with not many people going beyond that or below that. Since the Golden Bears have only failed to win seven games once in the Tedford era, it seems playing to averages would be just fine for most Cal fans this season.

Unsurprisingly, almost all our readers are fairly confident in a victory over UC Davis--at 0.975 with a standard deviation of only 0.074, it was the easiest prediction most of our fans made. The majority of the ballots were either 99 or 100 percent for an opening day win at Memorial. Wazzu and Colorado also are considered easy opponents for the Bears next season, and the only three games that I'd expect Cal fans to be baffled to lose.

In a shocker, USC is again the toughest opponent, and it's not terribly close, with the fourth lowest standard deviation (0.115). A little bit surprising is that Oregon State is second--I know we haven't had much success with the Beavers lately, but Oregon and Washington seem to be tougher opponents this season. Oregon State's on the next tier with Arizona.

The most interesting result was probably Nevada. At 72%, our results seem to establish equal, if not greater difficulty as we do with conference dates with ASU and UCLA. That seems a little strange--although the Wolfpack aren't going to be pushovers in 2010, it's not going to be a substantial road trip and won't be your typical road game. 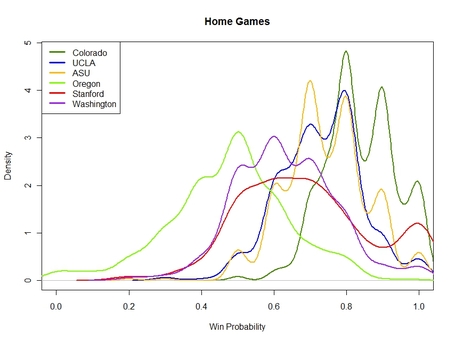 Where will the home losses come from?
Not too surprisingly, most fans give us a 50-50 shot to beat Oregon despite the recent success we've had duck hunting in Strawberry Canyon. We'll probably be underdogs when the defending Pac-10 champs come to town in November. As you can see from the graph above, lots of Cal fans are pretty low on us pulling the upset.

The second candidate is a little more difficult to establish. The Huskies are second in the toughness rankings at 63%, but that's hardly a vote of non-confidence. The Furd is next at 68%, and then UCLA (73%) and ASU (74%), and there's plenty. All in all, the win probabilities for those four games adds up to a 3-1 record, despite the fact we'd probably be disappointed if we lost any of these four individually. Up to you to figure out which one is the one that we'd get upset in. Gotta love stats. 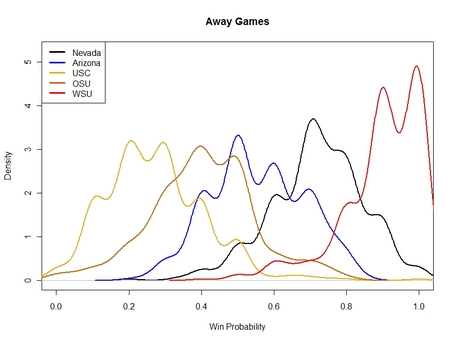 The road is the road

While home win distributions are pretty bunched up as opposed to previous years, the road is about the same. USC is still the toughest sell, Oregon State is next hardest to go, then Arizona, Nevada and Wazzu. For the Bears to go 3-2 on the road, it seems like they'd have to win one of the three in LA, Corvallis or Tucson. Since Cal lost all three games in those locations in 2008 and two of them in 2006, I'm guessing going 1-2 on this stretch would be acceptable if we meet our home expectations.

The lows, the highs, and the ones closest to the mark

No one predicted the Bears to finish with a losing record. Some got close though. The worst got you 6-6. The most dreamy of us got 10-2 on the mind.

What your fearless leaders projected.

TwistNHook at 7.79, norcalnick at 7.6, Berkelium at 7.44 are a little bit lower than the overall expectations. You can tell there's a lot of wiseness coming from those boys.. Twist's 70% belief in a win in Tucson seems overtly optimistic, although that's counterbalanced by a mere 25% shot at victory in Corvallis and a 65% chance of victory in Reno. Norcalnick seems fairly confident we'll sweep the nonconference schedule, but otherwise his ballot is pretty much reflective of the mean for each team. Berkelium is surprisingly pessimistic. Berkelium seems awfully wary of that Nevada game--his 55% odds are some of the lowest by anyone who submitted a ballot.

Our most optimistic Golden Bear is ragnarok at 8.06, which is probably helped by an enormous confidence of winning all 7 home games and a decent probability of winning on the road; only the Oregon game is under 50% for rags, and every other game at Memorial he gives Cal at least a 72% shot of knocking off the opposition (going over 80% for five of those games).

On the flip side, Hydrotech is not so high on the 2010 Golden Bears, projecting 6.85 wins, mostly due to the 5% chance he gives us to beat USC and the 30% chance we beat Jake Locker and the defending Pac-10 champs at home. Considering how close to the mark he was last season, I would listen to the wise man.

As for me, I'm around 7.67 wins, so I do lean closer to the 8 win margin (although I wouldn't be unhappy with 7 wins). I do feel the Arizona game will be a tough matchup for us (breaking in an almost entirely new pass defense against the Airraid is no easy task), but do believe Oregon State works better for us than it has in previous years (the Beavers front seven, their consistent strong point for years, looks like it could be weaker than in years past). And I'm probably alone in thinking we have about the same probability of beating USC as we do every year in the Coliseum, about 25%.

All in all, I'm seeing a lot of people satisfied with an eight win season, who don't see seven and nine wins out of the realm of possibility, and would be disappointed with less and thrilled with more. Am I reading that right? Spill your thoughts on the numbers and the expectations game in the comments.