Share All sharing options for: Cal Baseball Esquerpades: Pain in the Palouse

We're going to try something new around here - a little more in-depth baseball coverage. If you haven't been following closely the Cal baseball team has had themselves a pretty decent year thus far. Though inconsistent the Bears have been in and out of the Top 25 and boast an exciting team with some surprising talent, inexperienced as it may be. In addition to weekend game threads we're going to try to have this weekly recap to go a little deeper into the box score.

That's two different games that Cal coughed up 5 run leads in. The Bears didn't manage to build a lead in the much more decisive 3rd game of the series. All that adds up to a demoralizing road sweep to begin the stretch run of the regular season that dropped Cal from 2nd in the Pac-10 to 4th. But if Cal has shown one trait this season, it's their streaky nature - six of Cal's seven series in Pac-10 play have ended in sweeps. If the Bears can turn it around they can put themselves in an excellent position for post-season play.

Hit the jump as we take a closer look at last week's games, next week's schedule, and names you should know.

I only listened closely to the first game in Cal's winless Eastern Washington weekend, but the game demonstrated the two weaknesses Cal must overcome if they want to get as far as they can this year: defense and pitching depth.

Defense is a difficult factor to quantify even at the major league level, and I can't begin to speculate on the range levels of individual defenders. But Cal is 9th in the Pac-10 in fielding percentage and a number of poorly timed errors have really hurt Cal this year. Two errors against Stanford led to two unearned runs in a 3-2 loss. Four errors contributed six unearned runs in another 15-12 loss to Stanford. And on Saturday Cal committed two errors during a five run WSU rally in the 4th inning and another two errors during a four run rally in the 7th for another four unearned runs.

In terms of pitching, Cal is lucky to have three starters who have generally pitched well. Dixon Anderson, Justin Jones and Erik Johnson have started 34 of Cal's 45 games. But Cal's bullpen has just one pitcher who has thrown more than three innings with an ERA lower than 4.68. If Cal's starter has a bad game it's hard for even Cal's balanced offense to outscore the opposition - and the first two games of the WSU series illustrated the problem quite clearly.

I only have one complaint about the offense against the Cougars, and it's more a question of strategy - I think Cal uses the sacrifice bunt way too often, in situations that don't require it, and with players too good to give their at bat away. There's plenty of nerdy math out there explaining why sacrifice bunting is pretty much never a good idea unless a) the batter is truly awful, like when pitchers come to the plate in the National League or b) because situationally your team desperately needs one run. And even that second situation is arguably.

In the forth inning of Saturday's game against WSU with the score tied 0-0, Brian Guinn led off the inning with a solid single. Mark Canha, the team leader in on base percentage, steps to the plate. He squares around to bunt and even fouls a few off. He eventually walks. Next up is Chad Krist, who leads Cal in slugging percentage. And HE squares around to bunt. I was already angry about Canha's bunt. But now your best power hitter is bunting against a pitcher who just walked a guy who was trying to intentionally create an out? I respect the fact that Cal's lineup is balanced, and that there is good reason to believe that the batters behind Canha and Krist will drive in runs. And admittedly, at that point the Cougar pitcher had only allowed two hits. But I really don't understand trying to take the bat out of the hands of your two best hitters - I mean, Canha is almost as likely to reach base as he is to get out! As it turns out, Cal ended up scoring 5 runs in the inning. But they left the bases loaded. Perhaps with one more out Cal does something with those three base runners and WSU's comeback is that much harder.

To continue our inaugural edition of the Esquerpades, let's take a look at the Best of the Best for the Bears thus far. These are the names you need to know if you haven't been following the team so far this year.

Batters: It’s really tough to single out a few Bears because as I've mentioned, the lineup is so balanced. Six position players have started every single game thus far. Those six players are each hitting between .321 and .365 from the plate. But two players stand out from a very deep, consistent lineup: Mark Canha and Chad Krist. 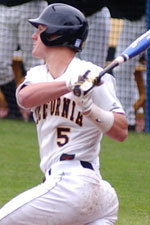 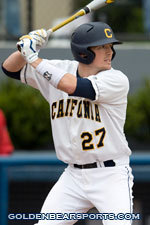 Chad Krist via grfx.cstv.com
Canha is likely the single most valuable Bear – when you lead the team in batting average and walks you’re very likely the key cog in the lineup. Canha’s slash line of .365/.478/.575 is impressive and reflects the usual result of an at bat – a hard hit ball or a walk. Even more impressively, he’s improved his performance against the sturdy competition of Pac-10 conference opponents. And he’s even flashed good speed for a first baseman, stealing 9 bags in 12 attempts. Krist, meanwhile, has been slumping a bit in Pac-10 play compared to the standard he set for himself early in the season, but he still leads the team in home runs, and when he's on he can knock the stuffing out of the ball. The homer I saw him hit against Oregon St. got out of the park quick. 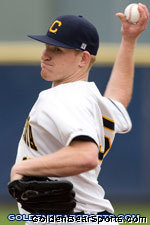 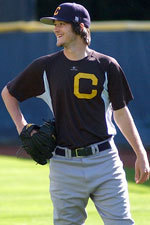 Pitchers: Unfortunately, there isn’t the same kind of depth on the mound for the Bears, but again two players have separated themselves: Justin Jones and Erik Johnson. On a team lacking in reliable relief options, Jones and Johnson have given the Bears badly needed innings as high leverage starters. Jones is the workhorse of the staff - he's thrown 25 more innings than any other Bear. He's also been a solid control pitcher - he gives up approximately two walks a start. But Johnson is a little nastier - he has thrown the most strike outs per nine innings (9.6). And together they've collected 15 of Cal's 27 wins (yes, I know that wins are a stupid, misleading stat).

That's it for our first weekly recap. We'll be back next week with a preview of Cal's HUGE series at home against UCLA (May 21-22-23). For now I want to know:

-Who is your MVP so far?
-Have the Bears already done enough to make the playoffs?
-Based on their performance so far, what would constitute a successful season?