Share All sharing options for: Ranking The Big Games Of The Decade: #7 2006 Big Game

It was more of an amble, really.  A saunter, perhaps?  Can one "mosey the field"?  Well, if one could, that's what Cal fans did after the 2006 Big Game.  Rushing the field doesn't quite cover it.  It was similar to those delayed standing ovations.  A few over-zealous souls instantly jump to their feet, clapping wildly, or, in this instance, rushing down to the field to celebrate Cal's 26-17 victory over Stanford.  Most of the people, however, look at these excitable folk and mumble to themselves "Really?  We're doing this now?  I gotta stand up now?"  "Really?  I gotta rush the field now?  OK.  I guess."

It was with great reluctance that Cal fans rushed the field.  But this is the Big Game.  Winning any year, even if Cal is on the verge of winning a share of the Pac10 title for the first time in 30 years and Stanford is, well, Walt Harris' Stanford, it doesn't matter.  It's Cal.  Versus Stanford.  In The Big Game.  Was the psychic pain of the late 90s and early 00s already lost by 2006 such that a ho hum victory over a really bad Stanford team was viewed with the same disdain of a party guest who used the wrong salad fork?  Apparently.  Apparently, only a handful of years into the Tedford era, we were already acting like USC fans.

The first thing that jumps into my mind when I think of the 2006 Big Game is the concern I have for those who sit in the Gold Zone most of the year.  The 2006 Big Game was the last year for old Stanford Stadium.  Even though the game was played at Memorial Stadium in Berkeley, it was the last year that Cal and Stanford provided ticket reciprocity for season ticket holders.  What does that mean?  Buy Cal season tickets and you get a ticket to the Big Game, even if it is at Stanford Stadium and vice versa.  After 2006, with the construction of the much smaller Stanford Stadium, both teams stopped doing this.  Obviously, Stanford realized that if they let all the Cal fans come on in, there wouldn't be any space left for that Stanford fan who actually shows up to games.  And his friend.  Oh and Toby Gerhart's father. 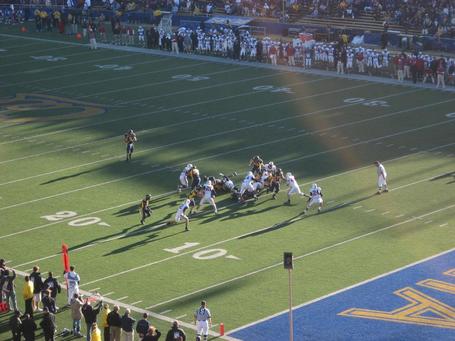 "I think that white dot just got hit by that blue dot, but I'm not entirely sure, anybody got binoculars and 20/15 vision??"

What is forgotten years later is that Cal had lost the two games prior, making it a near impossibility to reach the Rose Bowl for the 365th straight year.  They had lost to Arizona (at Arizona) thanks, partially, to DeSean Jackson's big toe being slightly too fat.  Then, they lost a tough game to USC at the LA Coliseum.  Heading into the Big Game, there was already a strong sense of frustration, because of the two losses.  Given USC's loss to Oregon State, if Cal had defeated just Arizona, they would have gone to the Rose Bowl.  Cal fans were hoping that the team would take out its frustration on the hapless Cardinal.  So, only defeating them by 9 seemed off to many Cal fans.

However, it is important to remember that there was a very fierce wind that day whipping through Memorial Stadium.  I know it seems as if I am just making excuses, but I remember the wind very clearly.  It was strong enough to affect the trajectory of thrown balls and field goal attempts.  Fortunately, Cal's field goal kicker was good on 4/5 attempts, but still I think that it is important to note the wind.

One reason why people might be less then enthused about this game was very little action took place in the first or fourth quarter.  It started off with a quarter full of a sole field goal kick by Cal.  Up 3-0 at the first quarter, Cal fans were perhaps nervous that the doldrums that affected them against Arizona and USC were continuing into this Big Game.

In fact, the first 3 scores were field goals.

It was not until there were just a few minutes left in the first half that things started to get interesting.  Cal had just kicked a field goal to go up by a thrilling 6-3 lead.  Stanford received the ball and everybody's favorite white non-QB Heisman contender, Toby Gerhart, rushed for 2 yards.  Then, the following happened:

Zack Follett with a crushing hit, forces a fumble that Syd'Quan Thompson runs back for a touchdown.  Sure, it's not an offensive TD, but we'll take it!  Up 10-3, Cal has the momentum.  For about 20 seconds:

On the ensuing kick off, Stanford takes it all the way back to the Cal 26.  A few plays later, this occurs:

So, with 2:33 minutes left in the first half, Cal was up 6-3 with minimal offense on both sides.  Then, due to defense and special teams, a flurry of TDs occurred:

In the 3rd quarter, there was some more action, but again for every action, there was an opposite and frustrating reaction.  Cal took the kick off to start the quarter and marched right down the field.  11 plays.  80 yards.  Nate Longshore in his pre-He's The Worst Thing To Happen To Cal Since Ronald Reagan Murdered Pappy Waldorf throws a key TD pass to Lavelle Hawkins:

Here are the game stats:

The real advantage for Cal is in the rushing yards where they get almost twice as many as Stanford.  Otherwise, both teams played about even.  The Cal rushing is paced by, well, you know who:

That is a 45.6% completion rate.  Ouch.  The vast majority of the receiving yards went to two guys: 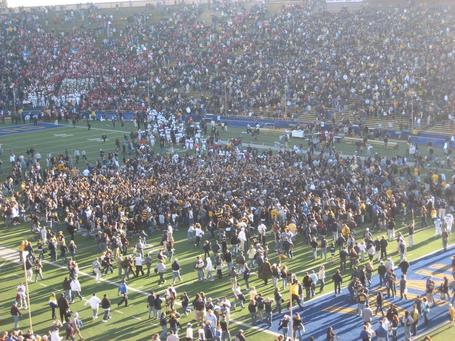 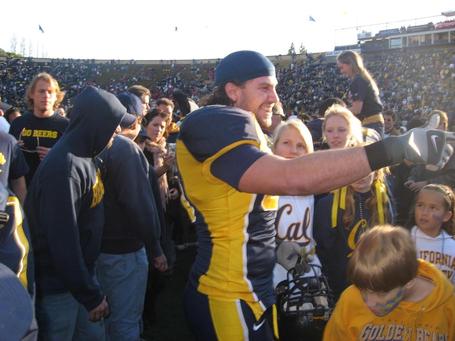 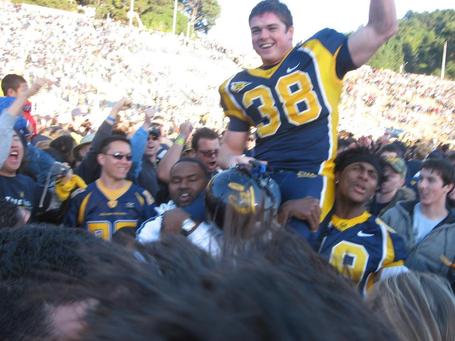 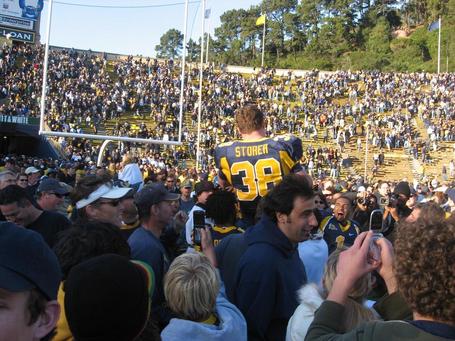 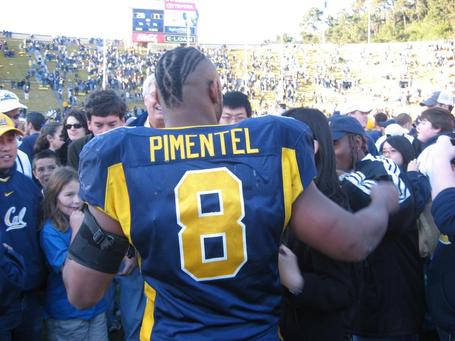