To that end, we take a look today at another key member in the marching band: the Student Director (or StuD). They get to select the music and determine when and where the band plays. I keep trying to convince them to do a show based off of my idea. It's called the Bear Vision show!

They could do the songs that are from the ads on the BearVision that cut into the band's always important playing time. They could spell out Odwalla at the top of the field and have races of Odwalla bottle-shaped band groupings. It'd be so epic! I, in every way, look forward to them rejecting this advice as they rightly should.

And I look forward to you learning more about the Student Director after the jump. Many thanks to Mr. Gartner for answering these questions. Don't forget, you can always donate to the band here. GO BEARS!

The job of student director has a lot of parts, but primarily I am responsible for the musical aspects of the band's performances. During football season, the StuD is the one standing on the box in front of the band, telling them when (and what) to play. Additionally, I am in charge of the Musical Activites Committee (MAC), which helps oversee and improve the band's musicality. Being StuD is a year-round job, however, as I am also in charge of scheduling and directing all of the band's various Straw-Hat-Band gigs. These include other sporting events like basketball and volleyball games, as well as weddings and other events. Finally, I also am the band's representative at weekly Rallies and Games Board meetings, which is the band's primary avenue for communicating with athletic department officials. Basically, I'm very very busy.

2. What got you interested in joining the marching band?

Great story, actually: when I was a freshman in high school, I got invited to go to a Cal football game. I didn't really have any college allegiances at that point, but I figured it would be fun, so I accepted. Little did I know I would be attending 2003's triple overtime masterpiece over U$C, and sitting RIGHT NEXT TO the Cal Band in the stands. I've been hooked on the Cal Band (and Cal sports) ever since. 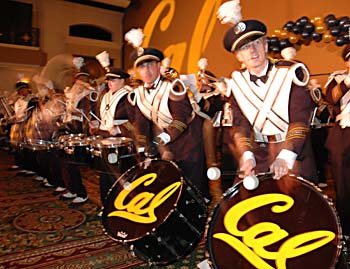 
3. What shows can we expect from you guys this year?

We're still in the process of choosing our slate for next year, in fact, so I can't give you specifics. However, we had an unprecedented 76 show ideas submitted this year, of which we will be choosing 6. So rest assured we will have some great shows lined up when the fall rolls around.

Generally because that's the only time we are allowed to play! Each year before the football season starts, the StuD meets with athletics to go over the rules about when we can and cannot play (the ball must be north of the 50, play must be stopped, etc.). Additionally, the StuD is at all times in headset contact with officials from Athletics' marketing department. If the band is playing, most of the time it is because we were told it was ok to play. Occasionally miscommunications happen, and that's when you may see a coach or player telling us to quiet down. However the StuD works as hard as possible to keep those missteps to a minimum, as well as being aware enough to get the message right away when the team wants (relative) quiet.


5. What is your view on the increase in BearVision ads, such as the Odwalla Races, instead of the band?

I think the increase in advertisements that cut into our playing time is simply an unfortunate fact of life, at this point. To be blunt, BearVision ads bring in the money, and the Cal Band doesn't. Obviously, as a band we want to play as much as possible, and I think that the fans appreciate the energy that we bring, but sadly we aren't the ones writing the checks. That said, the StuD works closely with officials from Marketing during the games, and we appreciate how hard they work to fit us in wherever possible. 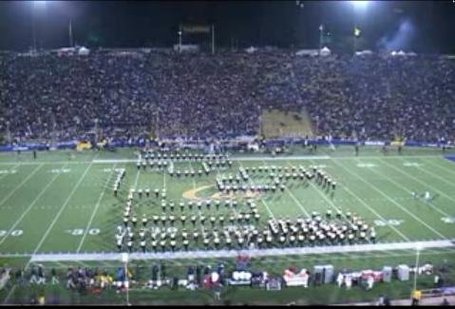 6. What is the average football day for the StuD?

Like all the rest of the bandsmen, my gameday starts in the wee hours in the morning for a final rehearsal of that day's halftime show and our traditional pregame. After a few-hour break to rest and eat an early lunch (really, for a noon game we are eating burgers and chicken sandwiches at 9:30 am!), I begin assembling the bandsmen for our noon rally on upper sproul. I generally direct a few songs at the rally, splitting time with our director, Bob Calonico. But it is only after our traditional march to the stadium and pregame show that my day really begins to differ from the rest of the band's. As they begin to file into their spots in the stands, I put down my saxophone and hat to don the headset and grab the conductor's baton. I spend the rest of the game in front of the band, directing the music that is played in the stands. After a successful game, I lead the band in one last song on our way down the hill past Bowles Hall. Once we return back to the band rehearsal hall (often 10-12 hours after we arrived there that morning), the gameday is over and its time to party! Or sleep. Usually sleep.

7. Past bands' shows have varied along a spectrum, with some focusing on performing as a traditional high-step band to the highest standard,and others bringing other elements into their field shows, including dancing, skits and elaborate props. Where on this spectrum can we expect to see next year's band?

Well, this upcoming year's Drum Major, Jon Nagata, is a prop-maker and handyman extraordinaire, so I think it would be a shame if we didn't showcase his talents at least a few times over the course of the season. And everyone always seems to love those full-band dance routines. But at the same time we never like to sacrifice our high standards of musical and marching precision. As a result I would expect us to cover basically that entire range over the course of the year. Some shows we will focus purely on the music and the marching, while in others we will let our hair down a bit and have some fun. Regardless of where we fall on that spectrum, though, our primary goal is to put out an entertaining and energetic show for our audience, which we hope to do again next year. 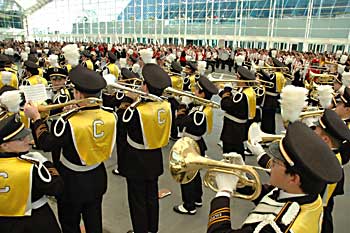 8. What's your favorite part of the whole Saturday gameday routine?

That's a really tough one, because so much of the day is great fun (especially if Cal's winning). I would say that my favorite part of gameday is that moment when the bandsmen are all lined up in the North Tunnel, ready to burst out onto the field to start our pregame show. In one moment you are standing in the tunnel, getting ready to go, and before you even knew what happened you are out on the field in front of 60,000+. Its a whirlwind of an experience, and I get a thrill every time.

9. What sort of standards are you going to set for the Band's musicianship? How are you going to maintain those standards, with so many other things (schoolwork, interband dating, etc.) competing for their time?

Let me tell you, its tough to compete with inter-band dating, but we do our best. I always want us to sound as good as possible in every type of performance setting- whether its with the full band on gameday, or with less than 20 people at a wedding or retirement party. I think the secret to sounding good all year is setting a foundation for good musicianship right at the beginning of the season. That's why our fall training program (we take the entire band to Davis, CA for three days right before school starts) is so important. Its there, before the homework and (some of) the inter-band dating has started that we can focus entirely on how we sound and look. If we start the season on a good note (pun intended), we can hopefully carry that through the year.

10. What's the best part about being the StuD? What's your most onerous duty?

The best part of being StuD is being up front and conducting the band. Everyone has their own conception of what songs would be best in a given situation, and one of the perks of being StuD is that I get to call the shots! Every conductor brings a little bit of their own flavor to the band's sound, and I am excited to add my own.

Probably the least enjoyable part of being StuD is sifting through the literally hundreds of performance requests that come in over the course of a season. Its tough to balance the demands we make on the band members' time, and I always need to be wary of making the band too busy with extra performances. But at the same time its always hard telling people that we can't attend their event because we are too busy.

11. How come you guys always play "Don't Let Me Be Misunderstood" and "All These Things That I've Done" much faster than the original songs?

That's a good question- I remember being shocked at how much slower "All These Things I've Done" actually is after playing it for a few years in Cal Band. I think the thing with covering other bands' music is that you have to strike a balance between staying true enough to it for it to be recognizable, but also changing its enough so that it is partly your own. I suppose that's what we've done with the songs you mentioned by speeding them up.

12. Of all the mascots in the Pac-10, which one would you most like to punch in the soft, cushy face-like area?

I'm not a very violent person, so I don't know if I would actually punch any Pac-10 mascots. But I'd sure love to see Traveler and Tommy Trojan fall flat on their faces on the middle of the field when we come visit U$C in October. And then maybe we can "accidentally" trip over them when we walk by.

Again, many thanks to Thomas Gartner. GO BEARS!