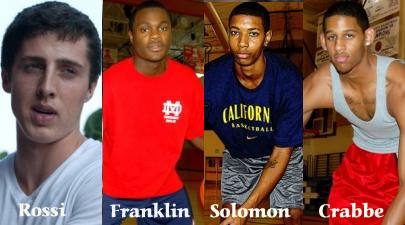 Time: 7:30 PM PDT
Stream at FoxSports.com (will post the exact link once I find it).
Website: HSAAA Classic

Remember that top 25 Cal basketball recruiting class I told you about six or so months ago? Well, here's your best chance to see them performing all in one place. These Bears show off their skills not only on the court, but off it as well.

With the four players, Cal has more recruits in the game than any other university in the country.

Omondi Amoke's dismissal from the team means these guys aren't just the future of Cal basketball; they could all feature heavily on this Bears team right now. Here's our best chance to see what they can do before they hit the Berkeley campus up. Enjoy the game!

(To discuss the Cal rugby national championship, scroll up)