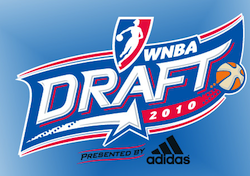 Here's your place to comment on where (if anywhere) Alexis Gray-Lawson lands.  Ideally (for Cal fans), she would end up on the Seattle Storm to join Ashley Walker and Devanei Hampton.  Or perhaps Lexi could go to the Sacramento Monarchs and every Cal fan intelligent and attractive enough to live in Sacramento can catch her in a game from time to time (If the Monarchs still existed!  Damn!)

But the WNBA draft is only three rounds and 36 total picks.  Just getting drafted is a huge accomplishment for any player.  Here are a few mock drafts to give you an idea of where people are thinking Lexi might end up:

I was under the impression that Lexi was considered more of a 2nd round prospect, but maybe there's a chance she can sneak up higher.  I've certainly heard that the Los Angeles Sparks are a strong possibility.  Here's your spot to watch and comment.  Good luck Lexi!