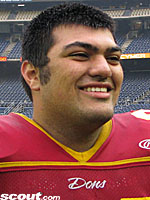 Tosh Lupoi just keeps on giving us reason to smile.

Lupoi's newest target, the 6'4, 300 pound monster out of Cathedral Catholic, switched from his early and surprising San Diego State commitment to the Bears. Jalil always had Cal on his eye though, as he had visited the Bears on Junior Day and re-affirmed his commitment to Tedford and crew today ($).

Jalil, a 6-4, 305-pound defensive lineman nicknamed Moose, is a four-star recruit nationally and an all-state pick.

Jalil became the Aztecs' first 2011 commitment when he announced his plans to attend SDSU midway through the high school football season. Jalil, though, said he changed his mind on a visit to Berkeley in February and returned to the campus with his parents during his spring break.

"In my heart, I wanted to go to Berkeley after Junior Day," Jalil said, adding that changing his mind was something that pained him. "I had to do the right thing for me and my family."

AztecTalk (HT solarise) had him leaning with the Bears a few weeks back, especially after one of his pals commited to Cal in 2009.

From the report on rivals, Cal appears to have taken over as his favorite despite [Mustafa] Jalil’s soft verbal to SDSU. Cal has now offered. Jalil is bunking with a rugby player/friend from Cathedral Catholic, and he’s got his buddy Alex Crosthwaite on the Cal offensive line hanging out with him. Other high-profile schools are on him now, too.

Jalil is considered San Diego's best prospect and was listed on Rivals250 to Watch in 2011, and is still aiming to be the #1 DT in the 2011 class. Scout has him ranked #5...just behind Vei Moala at #3, who also is looking strongly at Cal.

Continue to follow all the latest news in the monthly Cal recruiting thread!