Share All sharing options for: Ranking The Big Games Of The Decade: #9 2000 Big Game

She was crying.  Crying.  At a football game.  People do that?  I mean sure, she was a 5th year senior.  And sure in her 5 years, this was, by far, the closest she'd come to winning the Big Game.

It was something I wouldn't understand many years later, but the pain I felt at Cal losing the 2000 Big Game was nothing compared to so many others.  When Stanford fullback Casey Moore caught a 25 yard TD in OT for the sudden Stanford victory, 36-30, a funeral broke out in the student section.  Not the kind of cool New Orleans funeral where a jazz band marches alongside.  Or even the sort of funeral that is expected for somebody who succumbed to a terminal illness.  No, it was the kind of funeral for a youthful 20-something cut down in their prime, leaving a grieving widow and two young children.  It was the kind of funeral where people murmur things like "It was all so sudden,"  "He was taken so young," and the always popular funeral murmur "Fuck Stanfurd."

Students who mere moments before had been screaming at the top of their lungs, stood slack-jawed in stunned silence.  The only thing louder than the brutal joy of the Stanford fans was the deafening silence of fans who had, as usual, hoped.  Hoped.  We hoped.  Why did we do that?  Why do we continue to do that?  When will we learn that it only hurts us?

Such was the stiletto heel to the temple that was the 2000 Big Game.  Follow me after the jump for more information about this painful, painful Big Game.

Going into the Big Game, Cal was 3-7 in the 2000 season.  A first week win over Utah was followed with 4 straight losses and 5 losses in the next 6 weeks.  Cal just wasn't that good of a team that year.  Kyle Boller was a sophomore and would end the year with a 46% completion rate.  Going into the Big Game, there was one major bright spot to the year:

It is difficult to fully describe the joy of the UCLA game that year.  When Cal does well generally and then has a big victory, it's big.  When Cal sucks (I mean SUCKS, I mean "I hope next year we can win 4 games!" kinda sucks) and then has a triple OT victory at home, well, that is HUGE.  I remember it so very clearly.  I watched Jameel Powell intercept a UCLA pass from 20 feet away to seal the deal.  Reading the recap again today, it all floods back.  Also, it reads like a Who's Who of Cal awesomeness.

Cal finally prevailed in the third overtime, after matching touchdowns and field goals in the first two extra periods. When Joe Igber went in for a three-yard TD run in the third overtime, NCAA rules mandated Cal go for a two-point conversion. A slant pattern to Geoff McArthur resulted in an 8-point Cal lead. Two plays later, the game was over as Jemeel Powell made an interception in the Golden Bear endzone.

After the Cal defense ended a Bruin threat on their first possession when Scott Fujita stopped a 4th-and-1 run by UCLA, the Bears took advantage. It took seven plays for Cal to march 65 yards for a 7-0 lead with 6:34 left in the first quarter. It was a 23-yard screen pass to Joe Igber that culminated the drive.

McArthur?  Igber?  Fujita?  Anybody else who is awesome?

Three plays later, the Bears defense came up big once again. Cal safety Nnamdi Asomugha stepped in front of a Cory Paus pass for an interception and a 31-yard touchdown return, giving the Bears their biggest lead of the game, 21-7 with 9:09 left in the half.

But, really, that was the extent of the awesomeness.  One Triple OT victory over the UCLA Cory Pauses and a whole lot of sucking in between.  All that, while Stanford was one year removed from a Rose Bowl they didn't deserve.  The Post Traumatic Stress Disorder of seeing the Stanford Band "march" through the Rose Bowl "parade" was still affecting most Cal fans.  They weren't that good in 2000, but, we didn't have a lot of hope.  That would come later.

With Kyle Boller in the midst of a fairly poor season, it must have really warmed the hearts of Cal fans to see his stats on the day:

Not a lot of yards, but 4 TDs and a 64% completion rate.  Of course, he did throw 4 interceptions, apparently, so all was not well.  However, in looking at the numbers more generally, what really jumps out at you is the disparity in the ground game:

They had about 50 more yards passing, but Cal had 130 more yards rushing!  Where did this come from?  Of course, Joe Igber (who is one of my favorite Cal players of all time) had 16 rushes for 89 yards.  But little known Saleem Muhammad who finished the year with about 260 yards total rushed 14 times for 99 yards.  Oddly enough, the Cal bio for Saleem Muhammad does not reflect any information for the 2000 year, so perhaps there is another S. Muhammad out there, but it seems unlikely.

It was, in fact, this S. Muhammad who scored the first TD on a 1 yard run.  Way to show Mike Mohamed how that's done!  Like most Big Games, there always seems to be some crazyness going on.  Stanford jumped right back in it with..............a blocked punt.  Of course they missed the kick, so it was 7-6! 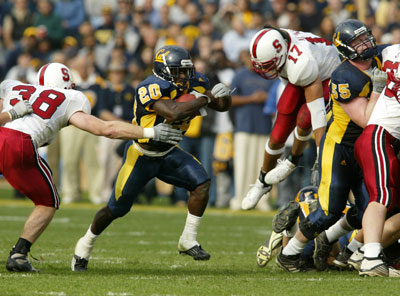 Then, disappointingly, Stanford scored a few more times to go up 16-7.  Joe Echema, who would later change his name to Adimchinobi Echemandu (I was only 1 m away from spelling that correctly!), then scored another TD for the Bears off a Boller pass.

Of course, the kick failed.

So, going into the 4th quarter, Cal is down 16-13, a fairly random football score.  That is when this happens:

What the hell is that?  Let's break it down.

Some dude I don't care about from Stanford scores.  BOOOO!  Stanford up 23-20.

Then just a handful of game seconds later some other shmuck from Stanfeit drops a 75 yard pass on us.  Pale faces, freed from that pesky blood, must have abounded amongst Cal fans.  Stanford up 30-23.

But no, our valiant heroes aren't going to give it up.  No!  We can't let Stanfraud beat us for the 5th year in a row.  Joe Igber understands this.  With just one minute left in the game, HE.TIES.IT.UP!

And we can't forget Geoff McArthur in all this:

Cal fell behind 30-23 with 4:17 left when Stanford's Luke Powell caught a short pass and raced 75 yards for a score. The Bears threw an interception but quickly got the ball back, and Geoff McArthur's 38-yard fingertip catch set up Joe Igber's 9-yard scoring run with a minute to play.

"I think it was a draw," said Igber, who was among several Cal players shedding tears in the locker room. "I was just trying to do whatever I could for us to score."

I'll end this remembrance with something that should help more recent Cal fans understand just how lucky they are:

Stanford senior defensive lineman Willie Howard got his first career interception and recovered a fumble to hurt the Golden Bears, who outplayed the Cardinal much of the day but still surrendered the symbolic Axe for another year.

"I'll always be able to say I never lost to Cal," said Howard, who wore his trademarks chains around his neck after the final outing of Stanford's Trench Dogs defensive line.