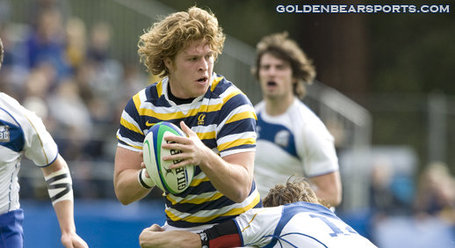 Jack Clark's Golden Bears are two wins away from a 25th rugby national championship, and one win away from a possible title rematch with the BYU Cougars squad that snatched the prize away from them last year. But first they must deal with Arkansas State. And don't let the bland school name full you; their team is stocked with international flavor.

Arkansas State is maybe the most intriguing team in the entire tournament. First-year coach Matt Huckaby inherited a team from his father that was built from nothing. South Africa was a primary building block, but the Huckabys have made an effort to market worldwide.

"Over the years we've developed an international pipeline," Huckaby said. "We have a couple of Japanese guys coming in next year too, and we have one from Korea. ... We like to blend international-born players with American-born players so we can create a diverse environment."

An effort to increase international enrollment at Arkansas State coupled with almost no Arkansas high school rugby fostered this development effort, and it's clearly worked.

Should be a tough matchup! Let's see if the Bears can claw their way into Saturday's national championship game!