Once a Golden Bear, always a Golden Bear.  That's one of the many reasons why we are so excited to bring you this interview with Karen Moe Humphreys, who was the coach for the Women's Swimming team for so many years.  Under Coach Teri McKeever, Women's Swimming has been on top of the world, routinely producing All-Americans and Olympic athletes.  They even won the National Championship! Hired initially in 1978,  Coach Moe Humphreys built the foundation for today's mega-success.  Without her, Women's Swimming wouldn't be having the success it is having these days.

Herself an incredibly successful swimmer (Olympic Gold Medalist and World Record Holder!), she instilled a professionalism and competition with the swimming team that continues to this day.  We are very excited to speak with her and help our readers get more information about another important Cal sport.  Please enjoy the following interview with her:

1. What made you decide to choose Cal to coach there?

I applied for several collegiate coaching jobs as I finished my graduate studies at UCLA. Even though Cal didn’t have much of a women’s swim team at the time, I had great respect for the University (all three of my siblings are graduates) and for what Pete Cutino and Nort Thornton had accomplished in men’s water polo and swimming.  So when I was offered the job, I jumped at the chance to return to Northern California and build a women’s program.

2. What was your favorite moment as a Cal coach? What other moments do you look back upon fondly?

I had so many terrific moments as Cal coach that is impossible to come up with one favorite. I loved when a swimmer had a big breakthrough and swam a huge best time.  I also loved it when someone would tell me how everything that we had been working on finally fit together and that she "got it", whether that be a technical aspect of her stroke or the skill to stay calm and perform under pressure.

3. What is the average day like for a Cal women's swimmer?

I am not sure how similar the current Cal swimmers’ days are to when I coached, but I guess it is safe to say - "busy".  Back in the day, they swam 3 or 4  mornings before classes and then again every afternoon and once on Saturday or Sunday. They also did strength/flexibility training out of the water several times a week and regular mental training.  There used to be no restrictions on the number of hours per day or weeks per year that athletes could train. Now the playing and practice season restrictions limit the training to 20 hours per week and four per day.  In addition to the work they do in the pool and weight room, I have heard that Teri has the current swimmers doing lots of interesting cross training, including things like Pilates, spin classes, and hip hop dancing.

4. What is the average day like for the Cal women's swimming coach?

Again, I can’t speak for Teri, but my days were pretty crazy, full of short term and long term planning, practices with the team, individual meetings with swimmers, department obligations and lots of recruiting. Most days started at 5:45 am and ended more than 12 hours later after the last recruiting call. 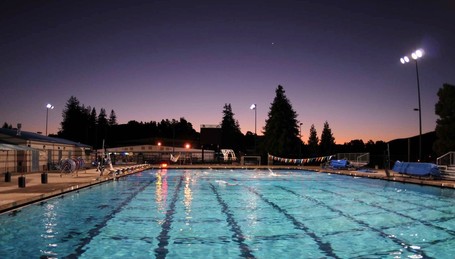 5. It is officially called Women's Swimming And Diving. Did you have a lot to do with the diving? What were your role for the divers?

In dual meets the diving events are two of sixteen events and in championship meets they are three of 21 events, scored the same as any individual swimming events. So they matter a lot to overall team results. When I was Head Coach,  I didn’t work with the divers directly, but I loved watching them train and compete and I supported them and their coach whole heartedly. We included them in our goal setting and team activities; they were important team members. Cal divers have to be really tough because of their difficult training conditions.  They work at a distinct disadvantage compared to other Division I divers who either train indoors or if outdoors, they have a dedicated and warmer diving pool. Cal divers train at the shady end of the same pool the swimmers use, Imagine trying to execute tricky and risky dives when you are shivering! Also at that time they didn’t have a platform tower or dry-land training rigs.

6. What is women's swimming recruiting like and has it changed since your time as the coach?

In some regards recruiting has changed a lot since I coached. For one thing, Cal has a much bigger budget now for home visits and campus visits.  And it has only been in the last few years that Cal women’s swimming and diving has been fully funded to the NCAA scholarship limit of 14 full rides. When I started in 1978 we only had one scholarship for the whole team and by my last year we had about 10.  What hasn’t changed so much is that Cal still competes against the same universities for recruits: Stanford, UCLA, USC, Arizona, Texas, Florida, Georgia, Auburn.

7. What are your thoughts on the current team and the success Women's Swimming has had under Coach McKeever?

Teri has done a tremendous job with her swimmers and it was thrilling to watch the team win the NCAA Championship in 2009. The Cal swimmers are always very well prepared and they swim fast when it counts. They are amazingly fit and are technically very sound. It is fun to watch them represent the University so well and also compete successfully internationally. 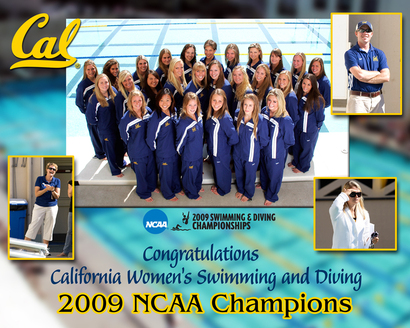 8. What was it like to win an Olympic medal?

Because I was as the world record holder and favored to win my race in the 1972 Olympics, my first feeling after the finish was one of relief, relief that I had handled the pressure and performed to my potential. Standing on the awards podium, watching the USA flag go up and hearing the National Anthem played in my honor was the thrill of a lifetime. As time goes on I am more and more proud of that accomplishment.

I joined my first swim team with my sisters when I was about nine. There weren’t very many sports available for girls in the 50’s and 60’s, pre-Title 9, but there was a strong age group swim team in our town.  I gradually had more success and I really enjoyed going to practice with my friends. Because of some spinal deformities I started wearing a back brace when I was 15. I was supposed to be in it for 23 hours a day for two years, but my doctor let me be out of it longer, for all of my swim practices.  During those years, swimming was the best part of my day!

10. Where can we see you competing in swimming or coaching now?

I started training with a Masters team in Moraga about ten years ago and I love starting my day with a swim. I seldom compete, only an occasional pool race or open water swim, like the Tiburon Mile.  My only coaching now is helping my fellow masters swimmers with their stroke technique.  I still get a lot of joy from helping people swim better.

Cal and UCLA are both great universities with outstanding athletic programs. Since I was at UCLA for six years and at Cal for 30, my loyalties are with Cal over UCLA. But I have rooted against U$C since 1972!

Setting World Records gave me a tremendous sense of accomplishment. Not only did it mean that I had done a personal best, but for a period of time I was also the best on the planet at something. 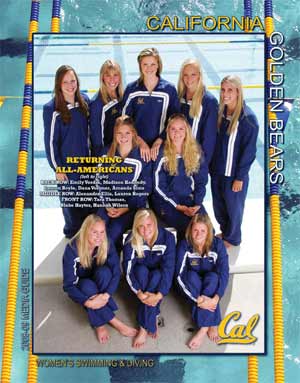 13. Who is your favorite Cal women's swimming athlete?

I love them all!

14. Do you have some favorite non women's swimming Cal moments to tell us?

The 1982 Big Game has got to be one of my all-time favorite Cal moments. It was a such a tremendous game with so many great plays and momentum shifts. The alternating cheers and moods of the two crowds reflected each lead change. The Cal fans were so bummed when Stanford went ahead after their last drive and the Stanford fans were celebrating like crazy. I turned to my husband, grabbed his arm and said, "It’s not over, there are still 4 seconds."  We all know what happened after that. The final lead change. Cal fans wildly ecstatic and the Stanford fans still standing, but in a shocked still silence.  Bliss.

15. Anything more you think we need to know about women's swimming?

Women’s swimming is a great training ground for champions, in the pool and out.

Many thanks to Ms. Humphreys for help with this.  Good luck to her and good luck to the women's swimming team.  GO BEARS!