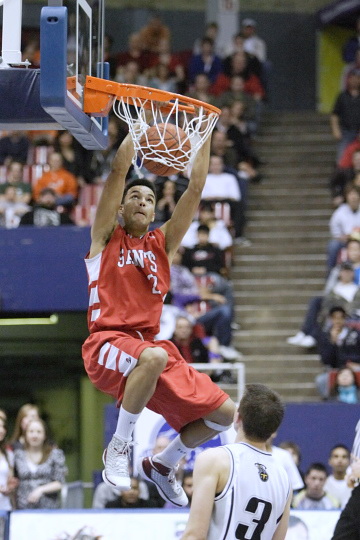 It became an imperative for the Bears to find a scorer to replace the loss of D.J. Seeley, and Mike Montgomery seems to have found just that player in our northern neighbor. Murray has flown under-the-radar most of the year and originally seemed like a Gonzaga guy, but he visited Cal this past weekend and liked what he saw. He is an added member of the highly ranked 2010 class and could see meaningful playing time next year.

As a combo guard, we could expect Murray to see plenty of action at the point along with Jorge and Gary Franklin. It'd be a nice change of pace to have a bigger point guard in the Deron Williams mold who can handle athletic defenders and not worry too much about turning the ball over. However, he's likely to play mostly shooting guard on a Golden Bear team that'll need all the scoring it can get from its perimeter players.

After the jump, what you're all looking for; the mixtapes and the highlight reels.

HoopsStarCanada has listed him as the 2nd best shooting guard from the 2010 class. He was definitely a top ten guy, along with Corey Joseph (the #1 shooting guard who just recently committed to Texas)

SLAM calls him the Canadian John Wall. SLAM is also known for their over-the-top hyperbole--don't sink the kid with expectations like that!

Here's a story from when he was 16, when he was was averaging 20.4 points, 7.4 rebounds, 3.8 steals and 3.5 assists per game and sported a high top fade a la the Fresh Prince (the high top has sadly been taken off since then). Seems like a real sweet guy--he went to his coach's daughter's piano recital!

At 17 he led his St. George's Saints to a 2008-2009 provincial championship, draining the game winner at the Agrodome over his team's main rival. Doesn't get more pressure packed than that.

He was named tournament MVP of the Western Canada Basketball Tournament, racking up 8 assists along with 4 steals, 7 rebounds, 10 points and a block in the finale.

He broke his ankle in a summer league game last year, which probably led to some teams backing off on their offers. Here he is on the court, breaking someone else's ankles.

The real question with Murray will be if he looks good because of his competition, but sometimes the best players just rise to the top. He does seem to have freakish athleticism for his size (his vertical leap and hops are unteachable and should work just fine in D1 play), and seems to have a positive intensity about him that will work just fine under Monty.

Here is tape from his AAU games. Aside from the athleticism, you can see a pretty good ability to finish at the rim and the opportunity to one man fast break the ball. He's a little loose with his handle (he dribbles it a little bit too high and wide, although Randle was like that early on too), but what's most promising is his outside jumper, which looks pretty smooth and fluid.

Coug Center did a scouting profile of Murray based on these vids:

It's obvious the competition isn't the greatest, but that explosion off the floor is good against anyone. Quickness-wise, it's tough to tell what he's really got, again because of the competition, but it seems decent.

Really nice form on that jumper. Will it translate to the college level? Tough to say because he doesn't generally shoot under duress in any of these clips. He's generally being guarded by guys who are shorter. But it does give you some confidence that he could knock down an open 3, which is a nice skill.

In total, a really nice package of a player if there are no lingering effects from his ankle injury. He's long, athletic, and ostensibly is precisely the sort of player Ken Bone wants -- he seems to be able to get to the rim and shoot from outside equally well. While he doesn't exactly have the ball on a string, he looks like he could competently hold down the point guard spot for stretches. He actually looks a lot like Marcus Capers with a jumper, if that makes sense.

Finally, here's some tape against the best Canadian recruits in the 2009 Canada All-Star Game. tsubamoto2001 at Bear Insider describes the plays Murray's involved in.

(0:45) He gets blown by while guarding Marquette's 2009 recruit Junior Cadougan here. Not a terrible thing, it just looks like he got caught looking for a ball screen.

(3:00) Hits a three off a swing pass. Gets good elevation on jumper.

All in all, looks like a solid Monty pickup. Welcome to Cal Emerson!