Share All sharing options for: Bears Necessities: Free Boom Tho! 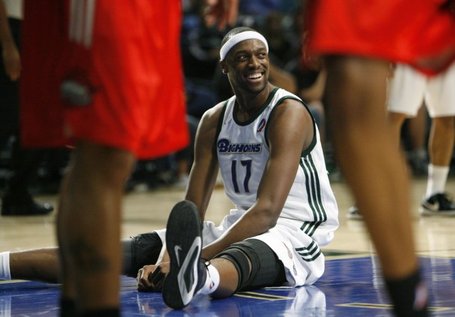 First of what may be a running weekly segment of links, thoughts, and random quickies. Today's subject: Rod Benson.

It hasn't been the best year for the Rod Benson movement; in fact, it's been all downhill since his interview with us. As always, we are to blame for all his failings; our atonement is to tell you to buy a Boom Tho t-shirt.

You might know he hung up blogging earlier this year to focus solely on his hoop dreams of being an NBA player. He tried to do all the things that made scouts and execs uneasy to put him on their roster, curbing his quirkiness and focusing solely on the aspects of his game.

No dice though. Benson tweeted earlier this week that he's probably done with the D-League for good, meaning he'll end up finishing his pro career overseas. It's a quizzical and sad story for Benson, who has always hovered at the margins, but never fully made the transition in scouts eyes to a pro-style game. Imagining Benson in the NBA

What makes his omission all the more noticeable this time Almost all data and analysis points to Benson being a legitimate NBA talent. Our SB Nation NBDL blog, Ridiculous Upside, has more on that.

Ironically, the one excuse for Benson not getting a call-up that you're not going to read in the preceding paragraph is anything relating to Benson not being skilled enough to play in the NBA - even though that's the only thing that an NBA player should really need to possess: NBA talent.

That's because the NBA talent is there - and is quite visible not only in the numbers you can see in the box score (look at the playoff averages above), but also when looking at the Synergy Sports Technology numbers to get a better idea of his impact on the defensive end.  According to SST, Benson had 337 defensive possessions this season while holding his opponents to a meager 35.7% field goal shooting percentage.  He ranked as "excellent" both as a post defender, a situation he was in 35.6% of the time, and as a spot-up defender, a situation he encountered 32.3% of the time.

So to recap thus far: he's good on offense, he's good on defense, he's smart, he's well-rounded and he's fixed every problem NBA teams have been said to have with the 6-foot-10 big man.  What am I missing?

Reading the rest of the article, in all likelihood, it comes back to the blogging thing. Could this be the first time that a talented athlete has been cast to the shadows because he stands out TOO much?

When it comes to branding, big sports are like any institution--protect the shield at all costs. The NFL and the MLB are the big ones of course--inside stuff stays inside. The NBA isn't as tough-nosed as those two, but that's not to say they do their bit of sugar-coating. Image branding is a big deal, especially in a league when a good majority of your athletes stray minority. 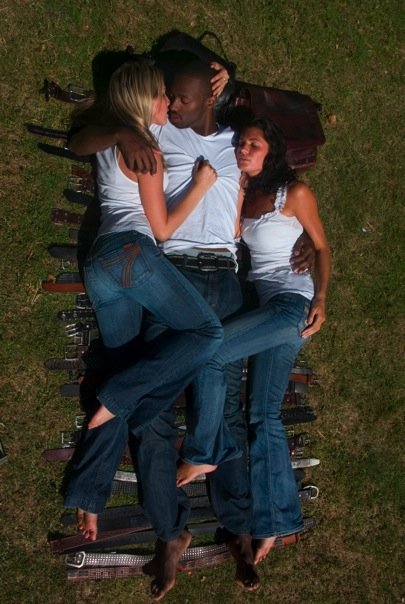 You'd think Benson's intelligence and charisma would be a good fit for a league full of colorful personalities. But at the same time they could work as a detriment, that you can invoke cliches about all his various activities, that his pursuit of basketball is not as pure as others (I'm sure Benson isn't the only athlete to have gotten bizarre MySpace messages, but he's probably the only one to have published them). If he's focused on so many other things than basketball, how can he succeed when the grind gets tougher, doubters point out?

Even though Benson's really just the smart, in-shape version of Charles Barkley, no one minds Charles because his honesty only comes at a personal, "in my opinion" level. Benson though? He probably wouldn't miss some of those things, and the sort of openness he's shown throughout his athletic career may come back and bite him. Perception beats reality ("is that dude still blogging every night"?), no matter the facts (24 points, 16 rebounds, 63% from the field, 1.7 blocks per game in his final three game series with Reno).

His celebrity apparatus (far from mainstream, but definitely not obscure) is too uncontrolled, too confusing for owners and coaches looking to keep things in-house. Although Rod has reiterated ad nauseum he would change things once he got to the league, there was always the potential that one day he could open up Pandora's box, or that his intelligence would not mesh with the hyper-athletes, or that he'd disrupt the locker room, or some nonsense.

The very fact he would start a blog on his own already displays a streak of independence, a streak I'm guessing none of these big guys look upon too kindly. Independence is not something appreciated by the traditional institutions. Doing things on your terms is a quick way to earn oblivion (which is a little depressing, since there was so much potential for the athlete-blogger. But some things just never change).

Still, when you watch the playoffs, and you see old stiffs like Theo Ratliff get shoved around by Dwight Howard and Pau Gasol rampaging whatever four comes his way...it's hard to imagine why Benson doesn't have a spot in this league. Whether it'll be here or in Europe remains to be seen. Sometimes you've got to let wild spirits roam free.