TwistNHook: Here was a man who was electrifying from his first moment until his last. Unfortunately, it was that very electrifying-osity that led to his last moment as a Cal Bear being his last, but I choose to remember his first moment. It was not his first touch as he had some returns and a 2 yard run before it, but it was his first game. Cal-Tennessee, 2007. The light of the nation shines on Memorial Stadium. And we get this:

Avinash: Might just want to link to the video rather than the Play-by-Play:

TwistNHook: Why can't we do both?

Avinash: I mean, we can, although it's redundant. Just being an editor here.

TwistNHook: I completely and totally plan on putting all of this text into the post.

That is a career yard per carry of 7.3. That is pretty frigging good. There was not much going on in 2007. He spelled Justin Forsett at times, but then suffered from hip necrosis, which ended his season. Clearly, 2008 was the best season for him. It was, of course, the only season that he actually finished healthy. He only missed one game that year and racked up nearly 200 carries.

Best got the "injury prone" label, but they were all freak injuries. Like I said in 2007, he had a rather random hip injury. Then, in 2008, he only misses one game after landing awkwardly on his arm after a leap. Then, in 2009, there was of course the freak head injury. It was not a reoccuring injury to one particular body part. Just an unfortunate series of bad luck. What can be done?

Clearly, when completely healthy (i.e. 2008), he was able to put up elite numbers. 8.1 yards a carry! That is pretty impressive.

HydroTech: In college football, a runningback averaging about 5 yards a carry is great. I mean, really great. So averaging even a lowly 6.1 yards per carry in 2009 is still frickin fantastic. And an 8.1 yard per carry average in 2008 is absolutely ridic. RIDIC. 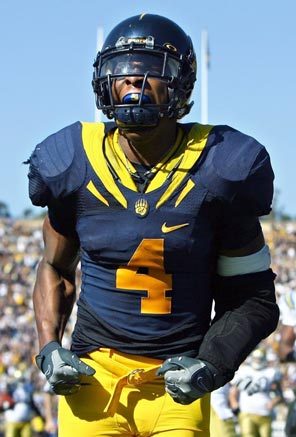 Avinash: Best seems to always have one mode: Fast. He ran fast. He cut fast. He caught fast. He leapt fast. He even interviewed fast. He's the prototypical Internet-generation athlete! 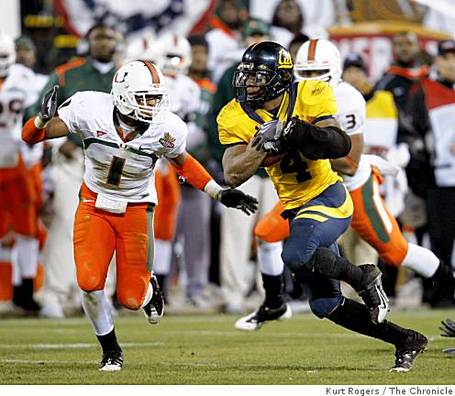 Jahvid's career at Cal is going to end up being one of those lost tragedies--it was thrilling for sure, but it could've been greatness on the right Tedford team. Put 2008 Jahvid on that 2006 team as Marshawn's backup (no offense to Forsett, but a Marshawn-Best running back duo could've been the greatest one-two ever on a college football field), and we're already designing his fresco in the SAHPC. Put 2009 Jahvid on ANY other Tedford team this decade, and he's probably a top 5 draft pick and possibly the greatest athlete in Cal history.

Instead, he'll be known as a gifted playmaker who threw up some unbelievable games, but got shut down by good defenses due to no help from his offensive compatriots. Circumstances will knock him down when he should have been celebrated as one of the greats who led us to the Rose Bowl. He was on the wrong team at the wrong time to showcase all he could do. 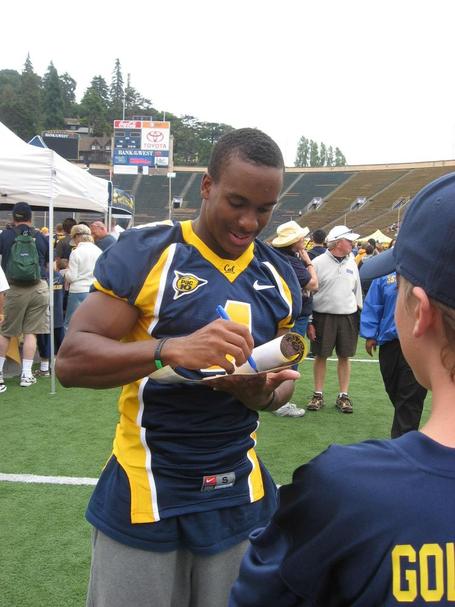 A lot of people say they're quite confident that things will be back to business with Vereen manning the tail this year, but you can't replace gamechangers like Best and expect the offense to suddenly get better. A lot of things would have to fall into place before I could say "I'm confident the Cal offense will look better." Look at how muddy USC's offense has been since Reggie Bush took off. We're not that far off unless everything starts coming together, because I doubt Vereen has the ability to open up games if the rest of the offense can't chip in and do their part.

Ultimately, Jahvid had to play Superman in a sport of players housing kryptonite, both on the opponent's sides and on his own team. It should've ended better than this.

Berkelium97: One of may favorite stories about Jahvid Best came from his offseason routine of running up a steep portion of Georgia Street, not far from where he lived in Vallejo. If you really want to appreciate how steep this hill is, check it out on Google Maps's Street View. This is no ordinary hill he'd run up two or three times per week. Best occasionally brought high school friends with him to run up Georgia Street. Best's friend Josh Brossard threw up the first two times he ran the hill. Not surprisingly, Josh told Best "this isn't fun." Best responded by telling him "It's not fun right now, but in a couple months when someone's trying to tackle me and I'm able to run out of it, that's when it's going to be fun."

This demonstrated how hard Best worked to improve himself each season. During that same offseason he put on about ten pounds of muscle to help him break through tackles. You might want to ask UCLA how that offseason training helped him pull off this unbelievable 93-yard touchdown run.

In addition to being a superb athlete, Best was an excellent student-athlete. He was a great ambassador to the university, as his humble, appreciative, friendly nature made you even more proud to cheer for him on the field. Despite the tremendous hype, the Heisman campaign, and the ridiculous statistics, Best remained humble during his entire time at Cal. Never showing a hint of cockiness, he always attributed his success to his teammates, coaches, and family. Even during the preseason Heisman talk in 2009, he remained committed to doing whatever was necessary for the team to win. Tedford continually referred to Best as a "team-first guy all the way."

This rare combination of tremendous talent, poise, and humility made Best an unforgettable player.

TwistNHook: My first memory of Best is the FanFest 2007. He was just a freshman at the time and was not given a spot at the tables. People like DeSean Jackson and Nate Longshore got their own table. Best was just wandering aimlessly like most freshmen.

However, his ability to wander was hampered when an organic throng of people coalesced about him. The fans were so excited and so knowledgeable about this electric freshman coming in that they pretty much all cornered him on the field (tough to do when it has no corners!) and the line just kept getting longer and longer. 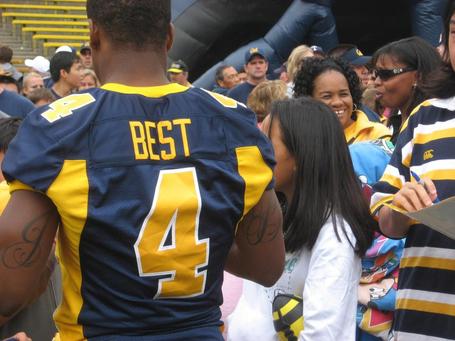 Two years later he was the premiere player at the FanFest and the lines were out the door (which is tough to pull off when there are no doors!). But back in 2007, he was just an unknown so popular that he never got much of a chance to walk the field.

NorCalNick: Wait, I have something!

Every big Jahvid run was a piece of artwork, each with their own unique beauty. Two in particular stand out in my memory:

The first was his 2nd 80-something yard run against Washington St. in 2008 (1:44 on Danzig's 2008 Jahvid Best highlight vid). The offensive opens up a huge hole and immediately the only man between Jahvid and a touchdown is #13. Jahvid cuts left and the safety takes the angle...but Jahvid's speed blows that angle away. The safety is so far behind the angle he needed to take that he ends up running into his own linebacker teammate to take both players out of the play. I'm sure nothing he had seen before had prepared him for taking on that kind of speed.

But Jahvid was never just a pure speedster. Take his touchdown run against UCLA later in the same year (3:53 in the same Danzig vid from above). Jahvid takes a pitch and sweeps to his right. He immediately encounters two defenders in front of him and another in his way sprawled on the ground. What to do? He jumps over the man on the ground, then just kind of stops and waits. While he's stopped his blockers catch up and take out one of the UCLA defenders. The other isn't quite sure what to do. Jahvid immediately spys his lane, bursts to the right and outruns everybody into the endzone with a dive. This play combined unbelievable moves with unbelievable patience, plus a little dose of speed to finish it off.

It saddens me that my last memory of Jahvid was seeing him leave Memorial through the south tunnel escorted by firefighters and paramedics. I'm hoping he'll provide plenty of highlights in the NFL to push that memory aside.