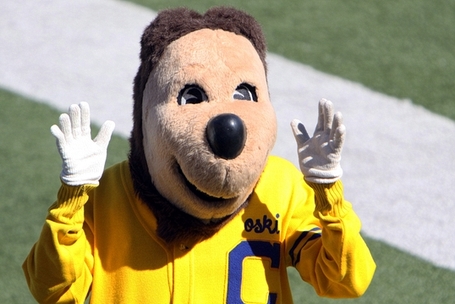 Love it or hate it, our 2010 CGB Hall of Fame brackets are going to get rolling soon. Because the offseason is here and us editors want as much vacation time as we can get  to focus on more crucial analysis-type posts and these posts will afford us those times when we'd instead have to pretend to know things.

Plus this is fun. FUN!

It'll be a little bit different from last year. It'll be almost entirely weekend faceoffs with maybe a few exceptions here and there, like when some Cal event is going on (i.e. Spring Practice, maybe baseball or the Rugby 7s event). It might be a little shorter but spread out a bit longer, just so everyone doesn't get mad at us for not working enough or talking about bigger issues. But we hope it'll be just as fun nominating, voting, and discussing this year as it was last year.

For those who want a look back,

Who will be the [at least] six new names to join them this year? Make your nominations in the comments, but not before re-reading the revised guidelines.

Guidelines are about the same as last year. Revisit the nominations thread from last year to get an idea of what we're looking for in terms of good nomination posts.

1) In terms of athletes, seniors or past graduates only. Jorge Gutierrez and Shane Vereen will all get their turns in the future. In terms of coaches, five year cut-off.  Mike Montgomery still needs a few more years to be even considered, bless his golf-happy heart though.

2) Nominations only for people you've watched in person. We decided that all-time would just be a replication of Cal's Athletic Hall of Fame, and a little too museum-ish. We want this to be about how the readers feel about particular athletes, and how their experiences with them shaped their Cal fandom.

3) Obviously, football (and basketball) players will dominate this section, but we'd like to have at least a few athletes from the other sports.  We'd love to highlight Cal athletes who didn't get much of the limelight when they were playing here.

4) The bracket will be either 32 or 64. I'm leaning toward 32 this year only because it went on forever last year. If there's a public outcry for 64, I'll reconsider.

5) We'll incorporate those comments in our writeups for the bracket matchups. If a player has already been mentioned, rec it again and reply to that comment thread and add your thoughts on that athlete, and we'll be sure to feature the best thoughts throughout.

You can nominate multiple athletes, but please use different posts. For why, see (6).

6) We will determine seeding by the number of recs a player gets in his nomination post in this thread. The more recs an athlete gets in the comments, the higher his seed will be. So if  Nate Longshore gets 7 recs and no one else gets higher, he'll get the #1 overall seed. If there are ties in the number of recs, we'll probably just go in alphabetical order, so rec your favorite athletes vicariously!

If we have less than 32 or 64 athletes (depending on what we go with), they'll all qualify for the tourney and we'll have some bye system in place. If we have more, we'll eliminate athletes with zero recs in some sort of fashion.

7) We will induct the Final Four and two wildcards. The wildcard possibilities will come from the twelve other qualifiers in the Sweet 16, i.e. anyone who qualifies for the second round but doesn't make the Final 4.

8) Please write explanations about why you're nominating Player X. They will be included in the official bracket matchup posts, as you can see by visiting the posts for last year's Hall of Fame nominees.

9) Oh yeah. Don't nominate people already in the Hall of Fame. Well, I mean, you can. But you're wasting your recs!!!

We'll probably announce the brackets this weekend or next. Nominate, explain, and rec the best that Cal Athletics has had to offer over our lifetimes! GO BEARS!