Share All sharing options for: CGB 2010 HoF Round 1: Kevin Johnson vs Robert Jordan

Two of Cal's finest athletes and most exciting players square off in this 5-12 matchup. The winner gets Jamal Boykin in the second round. Vote Cal fans--do you have KJ or RoJo?

Voting closes at noon PDT on Friday. After the jump, check he cases for both sides before coming to your decision.

Despite excelling at two sports in high school, Johnson decided to play basketball exclusively at the collegiate level, and accepted a scholarship to play basketball for the University of California at Berkeley . Playing all four seasons, Johnson ended his college basketball career in 1987 as the school's all-time leader in assists, steals, and scoring (since eclipsed by Lamond Murray). He was also the first player in the Pac-10 Conference to post a "triple-double" in the statistics, and he was named to the Pac-10's all-conference First Team in both his junior and senior seasons, averaging 17.2 points and 5.0 assists in his final basketball season. His number 11 is retired.

On the other side, RoJo doesn't have the reps or chops of KJ, but he has been around long and provided the perfect complement to superior receiving talent. He was forced into primary receiver position late in the 2004 campaign, when crippling injuries took down Chase Lyman and Geoff Macarthur. He had 29, 34, 46, and 47 catches during his four seasons and had 42 straight games with a catch, a Golden Bear record. When Hawk surpassed him as the second receiver in 2007, he handled it fine and played fairly well down the agonizing stretch. Add in a fine finale at the Armed Forces Bowl and you have a stellar four year football career as a Bear.

Surprisingly though, what we'll probably remember Jordan for the most are some of his iconic photos. The camera always seemed to shine well on photogenic #2. 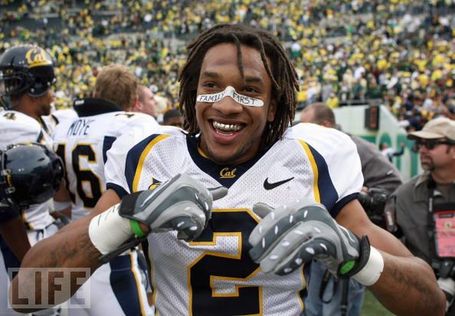 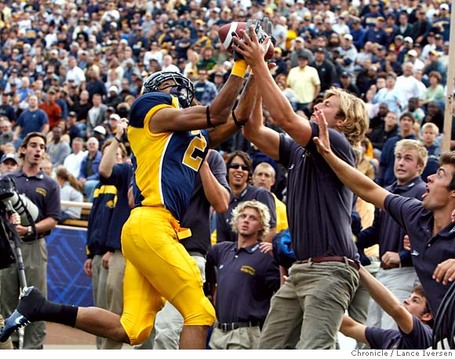 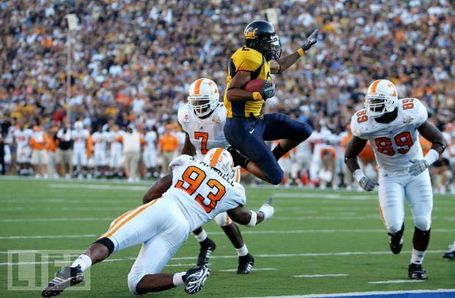 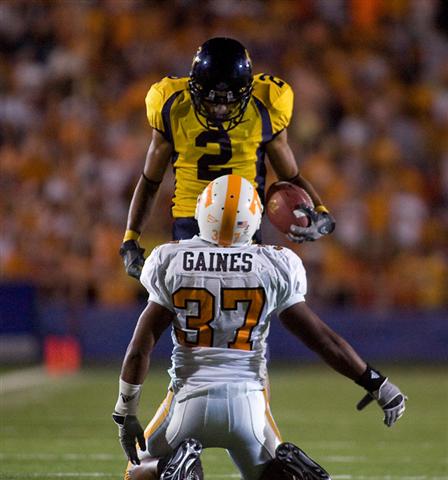 via www.calfootballfan.com
Vote. Winner takes on Jamal Boykin in Round 2.