Women's Week in Review: Curse of the Devil

Share All sharing options for: Women's Week in Review: Curse of the Devil

If Cal fails to sneak into the NCAA tournament they'll look back on two different four minute stretches against Arizona St. as painful missed opportunities. After taking a 10 point lead with four to play in Berkeley, ASU went on a 14-2 run to close out an improbable comeback. In Tempe this Saturday, Cal had a 6 point lead with four to play. This time, ASU went on a 13-0 run to close out a season sweep of the Bears. Beyond the obvious implications regarding the NCAA bubble, the loss to ASU has short term ramifications as well. With the loss Cal fell into a virtual tie with USC. Since the Trojans have the tie-breaker for Pac-10 tournament seeding, Cal will almost certainly have to beat Stanford next Saturday to avoid falling into the 4/5 game in L.A. That means that instead of an easier first round game as the three seed and a chance for a resume building win over UCLA in the semifinals, Cal will instead probably play ASU again. And If they manage to avoid a 3rd loss to the Sun Devils they'll face the dreaded Cardinal.

So Cal's NCAA tournament hopes rest on one of these scenarios:

1) They've already done enough to make the tournament (unlikely)
2) A win in the first round of the tournament against probably ASU (or USC or Oregon) would earn a birth berth.
3) The Bears need a resume defining win over Stanford
4) The only way in is to win the entire conference tournament

I can't say I'm optimistic. It would be great if Cal could make the tournament, because I do believe they've improved immeasurably since the non-conference schedule. Plus, a tournament appearance would be great experience for Cal's freshmen and a fitting conclusion to the careers of Cal's seniors. All I can do is show up next Saturday for senior day and cheer for a most improbably upset. For now, let's take a closer look at what transpired in the desert last weekend.

Cal's win in Tucson was a duplicate of their win in Berkeley minus a good shooting night from behind the arc. Arizona's various zones (1-3-1, 2-3, etc.) all tend to leave lots of room behind the arc, and Cal did a good job taking advantage previously, going 10-28. This time around the Bears only went 4-20 and subsequently had all kinds of problems putting distance between themselves and the Wildcats. Down by one with 6:04 left, the Bears got clutch play from Gennifer Brandon and Alexis Gray-Lawson to earn the W. Brandon collected 6 points, 2 rebounds, an assist and a steal in the final run, and Lexi hit a key jumper and followed her own miss with the offensive rebound that essentially ended the game.

The Bears did a great defensive job on both Davellyn Whyte and Ify Ibekwe, holding them to eFG% of 37 percent, kept their turnovers to a minimum, and shot just well enough to escape from Tucson with a win. This set up the critical matchup with Arizona St:

I'll have to be honest here: I essentially have no idea what happened in this game. It wasn't televised, there was no stream, and when the game started I was standing in section 25 of Haas Pavilion listening to 'Palms of Victory' as blue and gold confetti gradually settled onto the court. Let's take a look at my pre-game keys:

2) Get a better game from Alexis Gray-Lawson.

The Bears will out-rebounded 42-31, Alexis Gray-Lawson shot 7-23 from the field, and Danielle Orsillo went 7-15, scored 17 points, dished out 5 assists and added 4 steals (with only 1 turnover). I can't tell you why any of those things happened (particularly the rebounding deficit, which has now happened twice against ASU) but I'm pretty sure that's why Cal lost. I don't want to say that Cal matches up poorly with ASU, because in both games Cal has had a decent lead inside 5 minutes to play, but as long as ASU can neutralize Cal's biggest strength and win the rebounding battle it will be very tough for Cal to win. It looks likely that Cal will get another chance in two weeks. 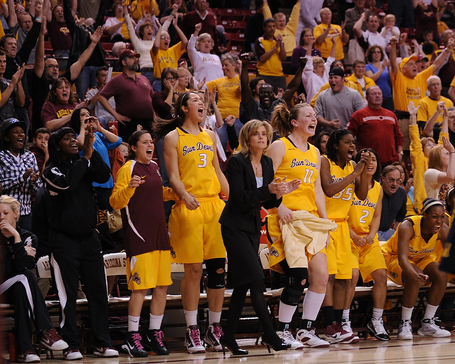 I hope Cal fans don't have to see this for a 3rd time this season in L.A.

Player of the game vs. Arizona: Gennifer Brandon

The points and the rebounds are already great - the fact that the assist and steal came in the last 5 minutes to steal the game is just a bonus. An I love seeing 5-5 from the line. Cal has had FT issues in the past, and it's very exciting to see excellent FT shooting from both Brandon and DeNesha Stallworth. I'm betting that both will be getting to the line plenty of times in their Cal careers, and it's a huge advantage to have bigs that can shoot well from the line. Cal can play Brandon, Stallworth, Gray-Lawson, Vital and Clarendon down the stretch and have a lineup that is balanced and doesn't have a poor FT shooter in the bunch, and that has probably won a game or two for Cal this year.

Player of the game vs. Arizona St.: Eliza Pierre 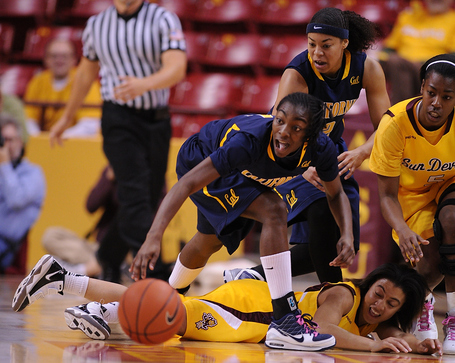 It was tougher to find candidates for the ASU game, but Eliza had a quietly efficient night. She was one of only two Bears to shoot 50% or better from the field and contributed in a number of ways by collecting 6 rebounds, 4 assists and 2 steals. Eliza's offensive game is still raw, and Cal's offense collectively lacks cohesion because of so much inexperience. All season I've been hoping to see a jump in assists so I was cheered to see Eliza get four and the Bears get 9 total (out of only 19 made FGs). Eliza's ability to track down rebounds is also impressive for such a small player both in height and build. As long as Eliza can continue to contribute in ways that don't necessarily jump out on the box score she'll be valuable despite not scoring a ton.

Well, the undisputed 2nd best team in the nation is coming to Berkeley looking to close out a perfect Pac-10 regular season, further cement a #1 seed in the NCAA tournament, and revenge last year's loss at Haas. Lexi destroyed the Cardinal the last time they came to visit, and she will undoubtedly be the focus of their defense. It will be senior day for Lexi, Natasha Vital and Lauren Greif, a trio that deserve a loud send-off for all they've accomplished in Berkeley. Come on down and give them a happy good bye...and maybe, just maybe, a glorious win to say good bye to Jayne Appel. Go Bears!