The Pac-10 expansion debate, it is old and exhausted, and not as imminently likely as the blogging realm may assume. I am tired of hearing the same regurgitated arguments filled with inaccurate statements.  Therefore, I set out to educate myself appropriately about the subject, and the primary issue, increased revenue for the current Pac-10 institutions. The idea of expansion is to increase demand for Pac-10 football, yielding higher media rights for games, however if this increased demand does not increase the average income per school, expansion will not occur. In this post I equate how much revenue the Pac-10 currently makes per school to population totals, and compare these figures to the populations of possible expansion candidates (namely, Colorado and Utah).

Unfortunately, I was not able to find information via the web regarding the value of media markets throughout the United States. Therefore, I am using the assumption that all audience is valued equally, and the value added by a school is determined by the audience it can reach. Nielson releases and ranks the media markets by population, but I believe that college football extends beyond the immediate proximity of the participating school. Rather, interest stretches to either a regional or state level. For example, interest in Nebraska's football program extends beyond Omaha and Lincoln to include the entire state of Nebraska. I assume this is true of all Western states not named California.  Therefore, I used state population totals instead of Nielson's rankings of media markets.

Using state demographic data as provided by the 2005 US census I arranged the fifty states by conference and calculated the population totals per conference. For states such as Georgia which house both an SEC program and an ACC program, I counted the population twice as both conference execs can still sell the entire population of Georgia to potential buyers. This data provided an estimate of the current populations within each conference footprint, also illuminating a primary reason why the Big-10 currently generates the most revenue, they have the most people.  (I believe this method is effective in determining earning potential for each major conference, with exception to the Big East.  I detail why I believe their numbers are inflated at the end of this post)

Pac-10 commissioner Larry Scott has also established he is looking for a lucrative long term media rights contract. The SEC signed a 15 year 2.25 billion dollar deal. Thus, the Pac-10 is seeking a contract lasting around 15-20 years. For the duration of this contract, Pac-10 demographics will continue to change, therefore, utilizing projections from the same 2005 census, I reviewed population changes for the next 20 years. For kicks, I also included the population projections for 2050, but these numbers satisfied personal curiosity rather than influencing my analysis. This data is as follows: 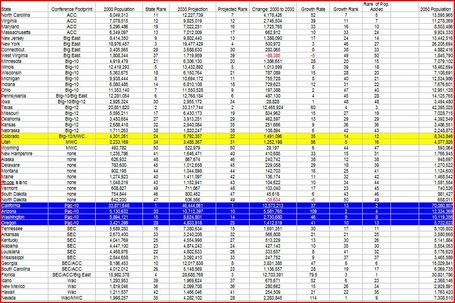 As visible, the Pac-10 is currently fifth in total population, furthermore, in spite of remaining fifth for the next 20 years, the population gap will be narrowed as the final image suggests.  During this timespan, the Pac-10 (as currently constructed) will add the second most people, thus the Pac-10 footprint will be among the fastest growing in the country.  In fact, California will have the lowest growth rate (in percentage) of the Pac-10 states, ranking 13th in the country.  More importantly, in terms of total population added, Pac-10 states will rank: 2nd (cali.), 4th (ariz.), 8th (wash), & 13 (oreg.).  In 2030, the Pac-10 will have the 1st, 10th, 14th, and 25th most populous states.

What needs to be remembered, is the Pac-10 does not simply want to add more schools.  They want to increase their current average revenue.  If population determines audience and audience determines income, the Pac-10 wants to add schools within states that are at or above the current Pac-10 averages in population.  The following is a chart of the current Pac-10 states divided by the number of schools within their state (state population / number of Pac-10 schools in that state).  For example, Washington's population divided by two (U of Washington and Washinton St.).  I've also included several other states, in each of the other states I assumed the Pac-10 would only add one school.  The only exception was Texas, which I assumed would include both UT and Texas A & M.  At the bottom, I calculated the average population per school in the Pac-10.  Seeing as California accounts for a vast portion of the conference's total population, using California as the standard for new schools to be evaluated against sets an unattainable standard (only the most 40% of states currently exceed the Pac-10's population per school).  The second figure adjusts the Pac-10 average to exempt California and its four schools.  Therefore, the second number evaluates the average population per school for Arizona, Oregon, and Washington. 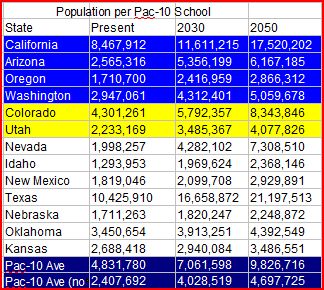 Currently, only Texas exceeds the current average population per school with Colorado being the only other school that is close.  Exempting California, Colorado vastly exceeds the averages, as do some other Big-12 schools.  Of the non-BCS aligned schools, Utah is the closest, with Nevada and New Mexico about a half million off.  Looking at the expected growth, again only Texas exceeds the population averages, with Colorado again being the only other state close.  Exempting California, Colorado exceeds the average by 1.7 million people.  Meanwhile, Nevada actually becomes the next most populous state exceeding the non-California average by 200,000.  Due to poor population growth the current Big-12 schools (with exception to Texas & Colorado) become less appealing as time progresses.  In spite of strong population growth, the gap between Utah and rest of the Pac-10 only grows.  However, the following chart shows media market by county for the contiguous United States:

This diagram shows Utah's media market extending beyond the boundaries of its home state, and into both Nevada and Wyoming.  Therefore, Utah's state population total does not reflect the true reach of its potential as a media market.  Yet, it must also be realized that the counties in Nevada and Wyoming within the Utah media market are sparsely populated.  Currently, these counties add approximately 124, 079 people (I could not find their projected 2030 totals).  The additional 124,000 people place Utah's population total 50,044 people short of the Pac-10's average (exempting California).

Similarly, both Colorado and Washington media markets extend into nearby states.  Colorado's additional 54,273 people from Wyoming is offset, by the loss of two counties in the southwest of the state to New Mexico's media market.  Washington's extension into Idaho is relevant because it further reduces the potential population added by an Idaho school.

To gain bearing on what these per school population averages mean in terms of money, the following diagram details the population per school by conference. 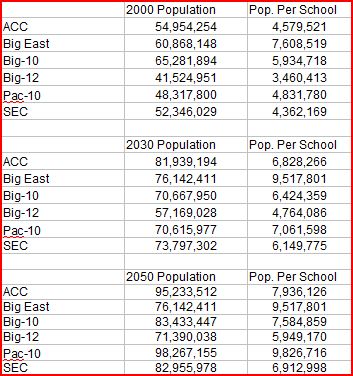 The SEC and the Big-10 are the largest money generators, yet the SEC has the fifth highest population per school total, this fact limits the credibility of this study.  My only rebuttal is that the SEC has a conference-wide passion unmatched by the rest of the country.  Yes, other schools passion can match that of the SEC (Nebraska), but no other conference can claim the same conference-wide appreciation for college football (Nebraska is offset by Iowa State, or Ohio State is offset by Illinois).  It should also be noted that with the ACC's, Big-12's, and Pac-10's current contracts are outdated and do not reflect current market demand (which is why they are being negotiated in the next two years).

In reviewing the accumulated data, and assuming the population per school directly relates to revenue generated per school, Texas is the only state that would raise average revenues per school.  Colorado is close, and if you acknowledge California as a population and money earning bohemeth unmatched by those around it, therefore exempt California from the calculations, Colorado becomes an ideal candidate for expansion.  Accounting for California, all other potential additions are woefully inadequate in revenue generating potential.  Exempting California, Utah maintains the average, neither hurting nor helping the revenue intake for current Pac-10 schools.  Although, talk has begun about a conference title game without expansion, the current rules states 12 teams are needed, and the state of Utah would provide the necessary 12th team, without diminishing any schools revenue.

Regarding the conferences, over the next 20 years, the Pac-10's population growth will exceed the national averages, hopefully allowing for a more competitive television revenue stream (either through a network or TV deal).  Furthermore, although the western states dominate population growth percentages, we should not expect an end to east coast bias.  Although, Nevada, Arizona, Washington, Idaho, Utah, etc rank highly in percentage, the second tier of growing states consist of the southern atlantic coast states of the Carolinas, Georgia, and Virginia.  These states currently have greater population numbers, so in spite of inferior percentages, they still add a greater population.

What is interesting is the rather stark decline of the Big-10.  Currently, the Big-10 has the largest population mass by a sizable margin.  Within the next 20 years, the Big-10 will only add approximately 5 - 6 million people, thus be passed by 3 conferences, and very close to the Pac-10.  Perhaps this realization is guiding Big-10 expansion, the hope to increase market share, while they are the most desirable product.

If the Pac-10 enters into a network partnership with either the ACC or the Big-12, the stronger candidate (based on population) is the ACC.  They are currently 3rd in population rankings, and in 2030 will be ranked first.  Meanwhile, the Big-12 is last, and will remain last in 20 years.  Looking at the Big-12 demographics, Texas comprises half their market, this trend will only increase as Texas continues to explode, and the other plain states struggle to grow (Colorado exempted).  Personally, I also believe the ACC adds more exposure (the eastern seaboard) than the Big-12 does (pretty much, just Texas).

Flaws in my study:

All audience is not the same.  I am not a TV or marketing person, but if I were an advertiser, I would target potential consumers with disposable income.  Therefore, televsion markets which average greater incomes would be more valuable than television markets with low incomes.  I did not include income, cost of living, or any other monetary factor, rather I treated all audience the same.  It is probably not true.  Similarly, I could not account for the level of support within a state population.  Utah fans may be more loyal and likely to watch than Stanfurd fans, yet in my study Stanfurd is considered more valuable since its population numbers (or 1/4 of California) is greater than the state of Utah.

Population projections are exactly that, a projection, they are an estimate.  I double checked, triple checked, and quadruple checked the data regarding California in 2050, it projects 70,000,000. Having checked I read that correctly, I still don't necessarily believe that figure, particularly since other mega-states like Texas, Florida, and New York begin to level out around 2030.

Was this article helpful?