Tonight, Cal completed their trampling of the state of Utah with a victory over the Lady Cougars(I know it's redundant, but that's what they're called!) of BYU.   I caught the game with Calnet and some other friends - another fun Cal victory, and it really gave us a good glimpse of the future of the team.  After the jump: the write-up, some photos, and some video.

From the opening tipoff, Stallworth was a force to be reckoned with.  To start the game, the offense flowed through her - she was fed down low a lot, and she made a lot of high-percentage shots.  Cal had the size advantage in the frontcourt, and we definitely took advantage of it early on.  BYU started playing defense to end the first half/begin the second half, but Stallworth remained a factor throughout, not only with scoring but also on the boards.  A good sign was that she didn't really get down on herself when she'd make a mistake.  I've seen games where she'd lose her nerve, and one mistake would lead to 3 or four.  That didn't happen today.  You could see her hang her head a little when she'd miss a free throw, but overall her head was in the game the whole time, and it showed in her 26 points, 11 rebounds, and 3 steals.  She led the team in points, and was tied for the team lead in rebounds(w/Caldwell) and steals(w/Pierre).  Definitely the player of the game.

Lexi was her usual self, leading the team with her strength and poise, and always ready to spark the team into action when they were lagging.  Finishing the game with 19 points, 5 rebounds and 3 assists, her all-around quality performance was also filled with her patented scoring drives to the hoop and death-from-above 3-pointers.

Another great part of the Bears' performance was that they never gave up on themselves; they held their poise throughout the contest.  They didn't play perfect basketball, of course, but they didn't go to pieces when the shots weren't falling, and their patience was key.  There were series where they'd move the ball around trying to get inside, but were thwarted by BYU's defense.  They couldn't get a shot, but didn't lose the ball either.  A shot would be taken before the clock expired, and they'd fight for the rebound to get a fresh clock, eventually finding better shots the second time around.  This happened two or three times - not only was it a great clock-eater (as they had a decent lead) but really exhibited the team's patience.  Their maturity was on display tonight, and it certainly bodes well for the future.

Great example: In this video, Clarendon takes the ball downcourt. The Bears slip up early in the play and almost lose the ball, but they recover nicely and move the ball around to find Stallworth down low, who makes a nice move to score the bucket:
http://www.flickr.com/photos/47913925@N08/4468533729/

Not only did the Bears win by 26 points, we outrebounded the Cougars 45-23 (with the Bears pulling down 22 offensive boards!).  The picture wasn't completely rosy, though.  Yes, we dominated BYU - but BYU just wasn't all that impressive.  I was honestly surprised that a team that played like they did actually made it this far.  They could barely get a shot to fall through most of the first half, and at the same time they weren't putting up much defense either.  Against this kind of team, I felt that the Bears shouldn't have let the game get as close as it did (when it did).   The final score doesn't reflect the 33-28 halftime score, that there was a span of at least five minutes where neither team scored, or the fact that Cal inexplicably missed too many easy shots, or that we had too many careless turnovers, most on bad passes.  In these areas, the Bears' youth shone through and gave us reason to worry.  They'll have to work past their lack of experience and remain incredibly focused to make it through the next two games.

That said: for a team that starts 4 freshmen, the Bears are looking really good.  Pierre seems pretty comfortable at the 1 and 2 spots, and her speed and quickness are really going to serve her well.  Caldwell and Stallworth both have the potential to be very dangerous down low, and complement each other well in terms of one drawing defenders to open up the other for an easy shot.  Clarendon started, but didn't play as much today - but she's shown that she's capable of great things as well.  More than their individual talents, though, these freshmen are already really starting to gell as a team and play as a unit.  They'll definitely have some more growing pains next year trying to fill the gaping void that Lexi will leave behind, but this is certainly a group to get excited about. 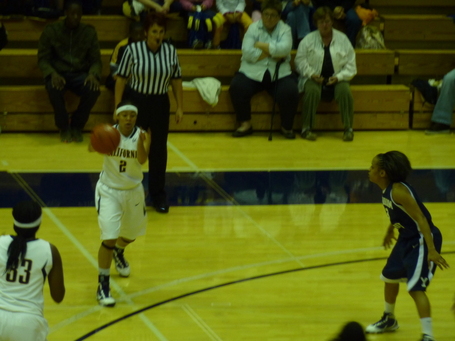 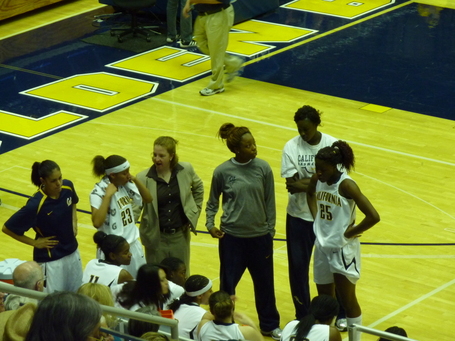 Tierra Rogers and Rama N'diaye look on during a timeout. 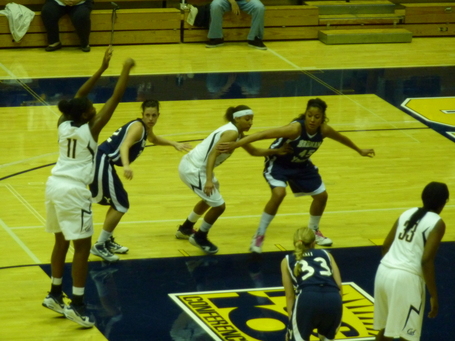 DeNesha Stallworth makes one of her 26 points of the night. 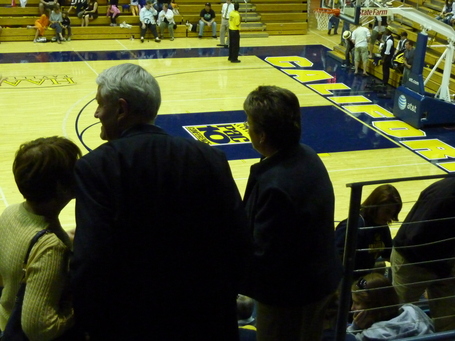 Both Chancellor Birgeneau and Sandy Barbour were on hand to witness another Cal victory. 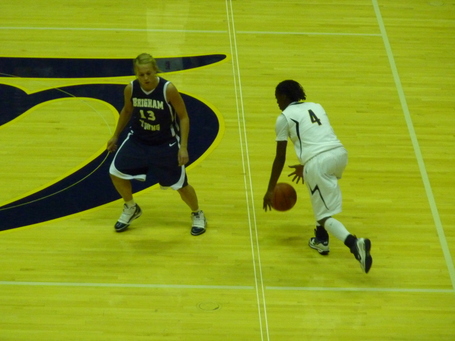 Eliza Pierre takes it to a defender in the closing seconds of the game. 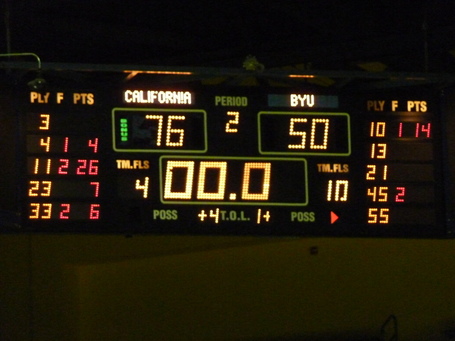 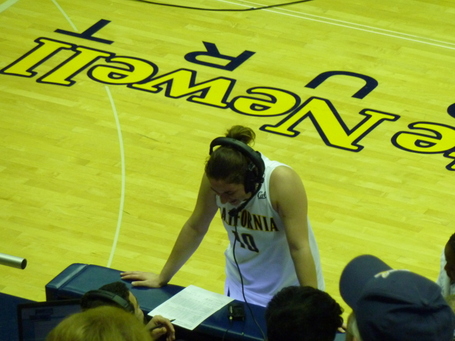 Lauren Greif doing a post-game interview.  The seniors were interviewed after the game, due to the fact that this was most likely their last game in Haas Pavilion.  It's hard to think of a better way to go out than a 26-point postseason victory. 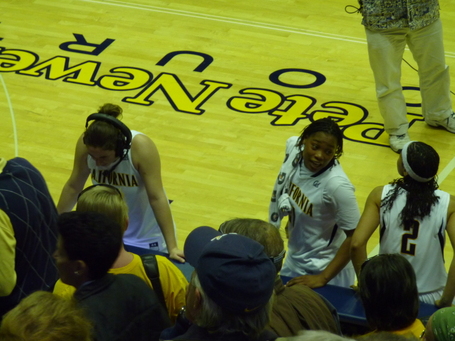 Lexi and Natasha chat while waiting their turn. 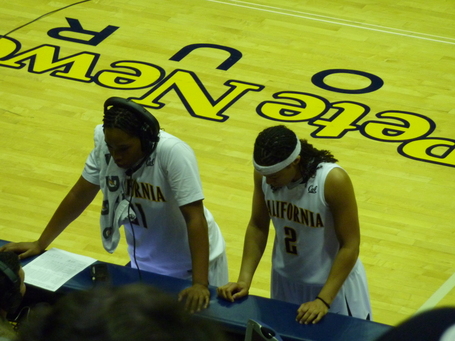 Lexi on the mic! 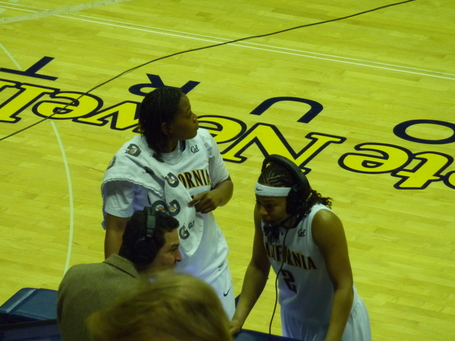 Natasha shares her thoughts on her final game at Haas.

This game was a great way to close out the Haas careers of our 3 seniors, and also a great peek into Cal's future.  One senior who didn't get much love today was Rama.  Obviously, she wasn't able to play today, but I wanted to give her a special shout-out because it was her last game in Haas, too.  Another special mention for Tierra Rogers and Brenna Heater.  Heater withdrew from Cal earlier this month, but I always liked watching her play, and still consider her part of this year's postseason roster.  Rogers, of course, will never take the court for California, but she is still a big part of this club.

Go Bears!  Beat DOWN the mighty state of Illinois!!

EDIT: paleodan informs us that Rama N'diaye hasn't redshirted yet(so this season would be it), and so should have another year of eligibility remaining.  Great news for Cal basketball!