Now that basketball season is over, it's time to get back to business. At long last, seismic retrofit and improvements to the west side of Memorial Stadium are beginning this year. As can be seen in this diagram, the west side renovation (phase 2)  will include the field and almost 2/3 of the seating sections, from section W in the northeast corner all the way to section MM in the south end zone. That leaves 18 of the 48 sections for the next phase. Since the east side renovation plans and schedule haven't been discussed in much detail, I wanted to to offer my perspective on this important project. 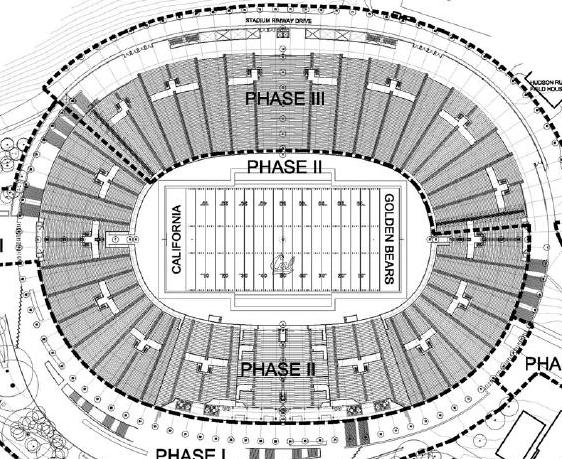 First, the timeline. When the Southeast Campus Integrated Projects EIR was first released in May 2006, the timeline appeared as follows.

Note the very ambitious schedule here. In this scheme, the SAHPC would have taken about 2 years to build. The project is actually taking about 3 years to finish. I'm sure if the SAHPC could be built in 2 years, it would be, mostly to give Coach Tedford and staff an extra year of sleeping in a nicer office.

Since we haven't heard anything publically regarding the east side renovation, when will it happen? Unfortunately, we may be looking at a deferred project for later down the road when financial conditions improve. If the east side renovation is completed by the end of this decade, I will consider that a success. I'd say it will depend quite a bit on Young Blues and Not So Old Blues to make this happen. The big donors are tied up in the west side renovation, so funding will be the biggest challenge.

Officially, no project start date has been anticipated. Cal's 2009-2019 Capital Financial Plan has a nice list of projects that are scheduled to begin in this decade. We learn that projects such as renovations of Tolman Hall, Moffitt Library, Lewis Hall, Hearst Gym among others are planned as well as the demolition of 2223 Fulton and some brand new buildings. No separate entry is provided for the east side renovation, although the project is mentioned as forthcoming in the description of the west side renovation.

For me, lack of inclusion on the Capital Financial Plan is not really a concern. If you take a look at 2005-2020 Long Range Development Plan or the New Century Plan which outlines projects well beyond 2020, there is no mention of the SAHPC or any stadium renovations. The New Century Plan was released in 2003 and was probably written well in advance of its release date, so new athletic facilities were not even at the level of a long-term dream during those dark days. Quite amazing how far we've come in less than a decade.

Now, let's take a look at the history of Memorial Stadium's east side for some perspective and then the original plans for the east side renovation, now more than 5 years old.

Here is a great aerial picture from 1947, cropped to fit the screen. Possibly the Big Game. Another huge game that year was against Navy. The 1947 game against Navy set the all-time attendance record of 83,000! 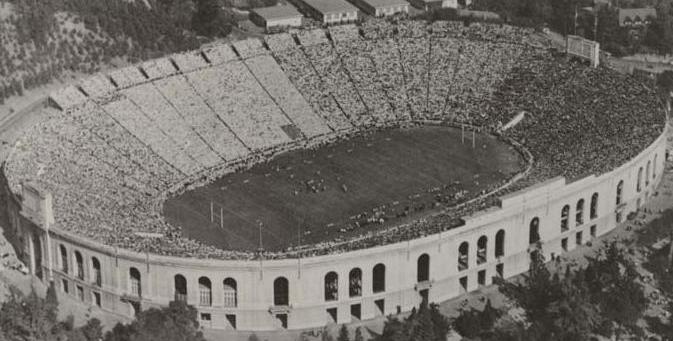 From around 1930 to 1957, temporary bleachers were present above 15 sections on the east side, from NN on the south extending to UU. Basically, where the ground elevation was high enough, bleachers were added. I would estimate that the bleachers in total added capacity for around 5,000 people. During the time that the bleachers existed, 21 games had a crowd of larger than 80,000! For me, it's hard to fathom how amazing that must have been.

Back to the modern day. As the past indicates, there is room along the east rim for additional seating to offset seating reductions in the bowl. The renovation plans currently do call for some new seating on the east side, but a very minimal amount that looks to be for donors.

Beyond modern facilities, a new underground concourse will connect to the existing concourse within the stadium walls and allow for circular access all the way around the stadium. The east side currently suffers from difficult access and a new concourse will relieve congestion along the street level.

New permanent lighting on the east side will complement the permanent lighting being installed on the west side. Full permanent lighting will improve night games for fans in attendance and TV viewers as well. The obstinate association of Panoramic Hill punks tried desperately (and unsuccessfully!) to block permanent lighting so they could preserve their precious quality of life. As if a few night games a year is that big of an inconvenience? Maybe they should attend the games and support the school for a change. There are certainly supporters of Cal football who live on Panoramic Hill, but I propose that Cal fans should attempt to buy all those houses up as they come up on the market. That would make for some great game day partying up there!

The visual impact of east side renovations will be important as the TV cameras face that direction. Watching games on TV is often the first introduction recruits have to any football team, so catching the eye of potential recruits at an early age will help make recruiting easier when the coaches contact them.

Ok, enough rambling, let's get to the details of the proposed renovation. Here is a sketch of the entire stadium after all renovations are complete. 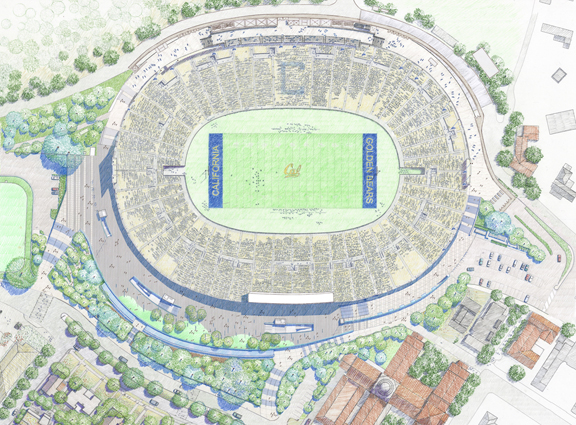 This closer view above reveals more details. A one-story structure with chair seating and a viewing deck is planned that extends from the edge of section QQ to the edge of section U. The total number of seats planned in this diagram is around 700. The seats would be similar to the hard chairbacks going in on the west side. 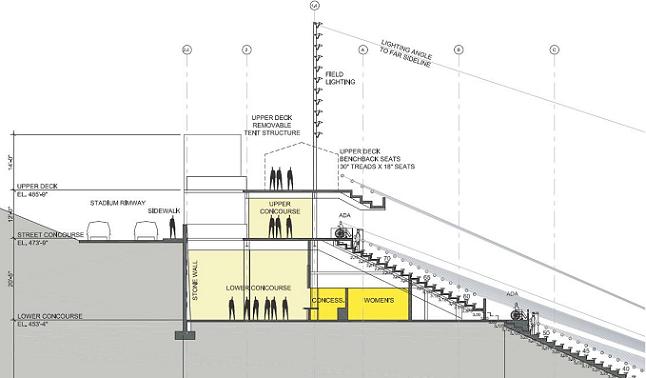 Now, a cross section of the underground additions. The underground lower concourse as it's called above would wrap around the east side at an elevation of 474 feet above sea level, or 44 feet higher than the existing concourse. Just like there are currently stairs outside the end zones connecting the outdoor path around the stadium, there will be stairs and elevators  to connect to the stadium's existing concourse.

The lower concourse would increase the concourse space by a huge amount, tripling the current space. The elevated seating would extend over the bowl seating to create a mini upper deck. The viewing deck on top would have a removable tent structure over it to protect people from the elements. The sidewalk along Stadium Rimway Drive will be widened and enhanced to create a real structure rather than the current setup which is just some flimsy cones walling off a narrow section of asphalt.

The cost of the project will probably be determined in large part to how deep the new improvements extend. There would certainly be a benefit to excavating to the level of the existing concourse. That would make traveling around the entire stadium easier and would allow the vomitories to be closer to the middle rows of seating rather than so close to the top as currently proposed. A deeper excavation would also allow additional program space to be constructed, either at the time of the renovation or a later date. The downside of excavating deeper is the cost and that could be a challenge given that no university club luxury-type seating is being proposed to generate the capital. Yet, this is probably the type of long-term vision that is needed to anticipate future needs. Let's think big and make it happen.

For comparison, the west side renovation budget is $321 million. Of this amount, two-thirds will go toward seismic upgrading and one-third towards the new amenities. The west side renovation project contains all of the areas supported by reinforced concrete suspended slabs and beams. The east side is entirely supported on earth and would not require the same expensive seismic retrofit.

If the east side renovation is completed as the plans indicate, the seating capacity of Memorial Stadium would be reduced to 60,675, a further reduction from the already reduced 63,200 seats that will be available in 2012. The problem with that is it reduces capacity to a really low level for the best games. We can currently sellout 72,500 for the biggest games now, so hopefully the reduction will come from visiting fans buying single tickets. Season ticket holders will have nothing to worry about, other than the likely increased ticket costs. The one story addition could certainly be made larger but was probably kept to a minimum (in the public images at least) to appease the Panoramics. Never mind that the neighborhood is only tangentially behind the stadium and no major views would be blocked.

Since home games would be needed to pay off the debt service, maybe this guarantees a minimum of seven home games a year. I know I would like to see us play seven home games during the odd-numbered years to ease the burden of playing five Pac-10 road games. If some schools like Michigan are already playing eight home games a year, which is completely preposterous from a competitive standpoint, then seven home games every year would help us ease our schedule, an unfortunate necessity in the current college football system.