It's been a great season. But it had to end. And for 63 of the 64 teams in the tournament, the ending is always bittersweet.

For our California Golden Bears to beat the Duke Blue Devils, everything had to go their way, and the moment Patrick Christopher got knocked up in the face by Jon Scheyer and his flailing elbow and missed the first five minutes, it just felt like our bad luck against top 10 teams would progress. Pretty sure Montgomery did not have Nikola Knezevic in his long-term plans and expect him to play the first five minutes. Christopher was a non-factor the rest of the game with only 2 points (getting cut up there is painful), and we knew we needed big games from both him and Theo Robertson to move on. Robertson finished 3-9 with 10 points. No miracle for us.

Jamal Boykin ended up taking the majority of shots (5-14, 13 points, 11 rebounds, one final double-double), and Jerome Randle nailed two final 3s on his way to the last 12 points of his top Cal scorer career. Markhuri Sanders-Frison finished 3-3 with 7 points before the refs decided he needed to foul out for being too big.

More thoughts coming. For now, give us your final thoughts on our seniors in the comments.

This reminded me a lot of the Cal-USC game when we got outscored 25-0. Duke's defense dominated. I don't recall us getting any good looks--even our layups were pretty well-contested, and it showed with all the missed buckets at the rim. When you can't finish from inside and outside...well, I don't need to spell it out for you.

The positions Singler, Smith, and Scheyer were at on the perimeter really frustrated our Bears and forced them away from the numbers. You'd see Randle at 28 feet out and Smith would be right up in his grill. Theo and Patrick didn't seem comfortable with the looks they got, they didn't want to drive against Duke's bigs, and ended up giving Gutierrez the ball too much...which is always a scary scary prospect. Jorge took more shots than Christopher, so Duke's strategy worked very well.

Kudos to Coach K. Technically, I've always thought he was an overrated Xs and Os coach (and personally, I've always thought he was a pretty smarmy douche, and still do), but he gets his guys to contest on defense, which is really really tough to do on the college level. Everyone played very well and took away our jump shots, which has been the identity of our team from day 1. If they can keep on playing that way defensively, they will go far and definitely can win a title.

Obviously, as in almost every Duke game I've ever watched (and the big reason other than the extreme douchebaggery of their team), the officiating was blatantly one-sided. The moment Jorge Gutierrez stared down that ref after one particularly bad call, every call went against him and the Bears. One sequence went something like this...

Jorge gets bumped from behind and misses the layup as a result. No call.
Sanders-Frison exists. Foul on MSF.
Randle drives between four defenders, no foul called on a bump.
Randle drives for a layup, MSF called for a ticky-tack screen.

If basketball detractors want to point at reasons why our sport sucks, this is a pretty good example. Bad officiating can destroy a game. Which is probably why everyone hates Duke--watching their games as an opponent can SUCK.

(Yeah yeah I know, to harp on this too much would be petty of me. But it's just too easy to do when it involves Duke.)

But ultimately, it was just size that killed us. Duke was the bigger team and it showed. Lots of easy offensive rebounds and putbacks, lots of good defense for 30 seconds that ended with a big man dunking or laying it in. Zoubek is not an impressive athlete, but he is tall, and none of our guys on the floor were taller. Sucks when that's the reason we lose, but that was pretty much what happened.

Despite his offensive non-game, Christopher along with Jorge bothered Scheyer pretty well (1 for 11), but Smith got the best of Randle (9-18, 20 points), as did Singler on Robertson (6-12, 17 points). Add in Zoubek's perfect 6 for 6 game and Plumlee's 3 for 4, and it's no surprise Duke eventually pulled away from Cal.

Ultimately, it's only a mildly disappointing finish to a historic season. Hey, when you lose four games against top FIVE competition, what can you do? We're still Pac-10 champions, and nothing can take that away from us. 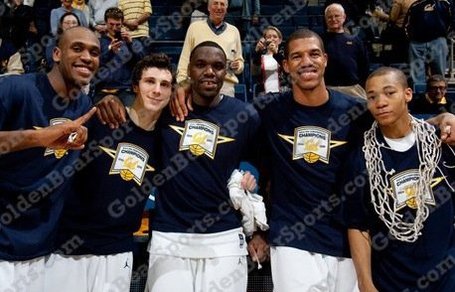 You guys will be missed.