Yesterday was a look-in at the pregame Senior Day festivities. Today, it's gametime.

Cal's seniors get introduced one final time. Nothing frilly or crazy (well except for Christopher's all gold shoes. Any idea what kind of Nikes those were?), just straight dimming of the lights and quick action. 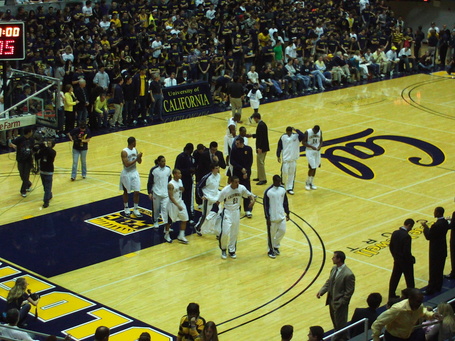 Cal's team assembles at the middle of the court. Christopher seems to be declaring thumb wars with Harper Kamp (at least I think that's Harper Kamp). 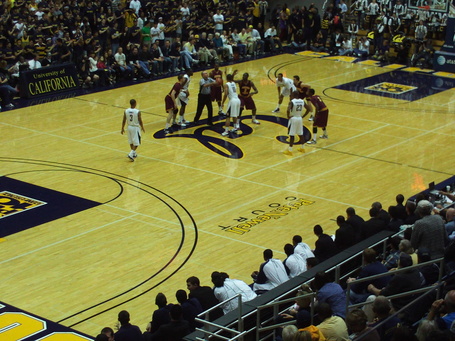 But now it's time for action. Boykin and Boateng square off on the "a" script. We're forty minutes away from...something happening. I'm guessing it's good. 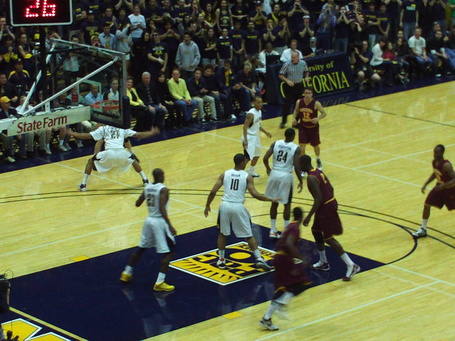 Cal on defense. The Bears would play a strong defensive first half that wasn't reflected by the score. The second half would be even better, and DID reflect the effort. 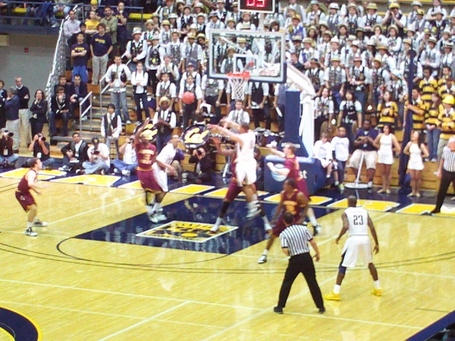 Boykin kicks it out to Theo for the open 3. Didn't get it to go though. 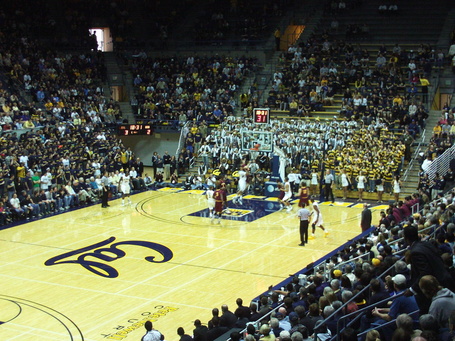 Randle watches and gets the friendly roll on a floater in the lane to make it 5-2. Check Amoke hustling and getting ready to hit the glass. 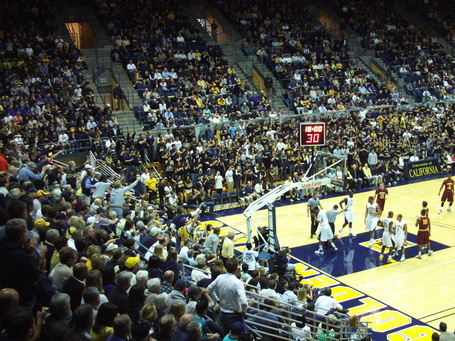 Boateng turns the ball over, Boykin gets all pumped, and Cal fans react appropriately. Boateng would have as many turnovers as points in this one (four). 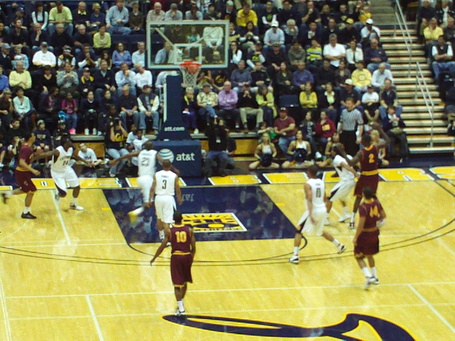 Jerren Shipp, doing his best Josh impression in this one. I was not amused. 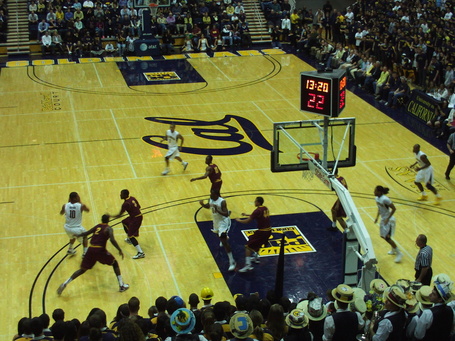 Boykin again moves the ball around to find Randle for a wide open three point attempt. 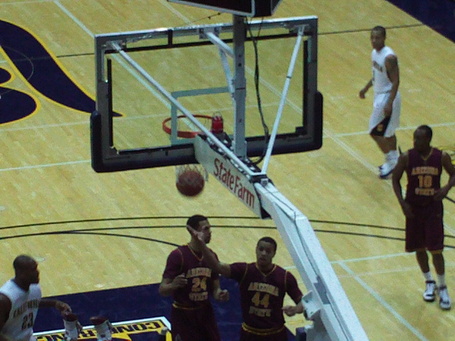 Theo Robertson's shoes are part of a huge AND-1 by Robertson to cut the ASU lead from 5 to 2. You can tell I'm a professional. 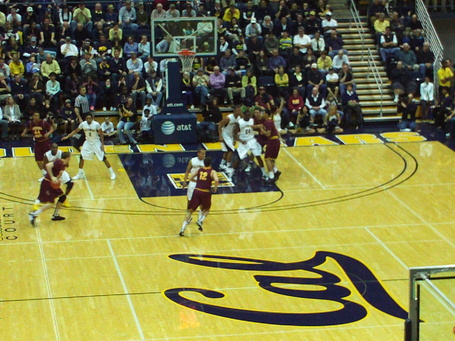 Christopher plays tight defense on his man; in fact all the Bears are playing pretty close up in this one. PC was praised for his defense in this one, and rightfully so according to gobears7.

He was guarding Ty Abbot, Asu’s leading scorer. Ty finished the day with 8 points on 4-13 shooting and 0-6 from 3.

Based on my recollection of the game, Patrick’s hand was up on Ty for most of those 3’s if not the 2’s also.

At halftime they trotted out fourth graders to...play basketball? Why were they doing this? I have to admit, it was horrifyingly compelling to watch a bunch of four foot pre-teens desperately try to heave the ball up in the air with the hopes they'd hit a college regulation backboard, much less the rim. Kind of like watching an awful movie where everyone in the movie is aware of how awful the movie is. Except the 4th graders don't really know the odds are stacked against them.

We need to come up with better halftime entertainment people. Let the Band perform, let Oski fight opposing fans, or better yet, do nothing. Stop exploiting kids. This is child labor. Well, unless the kids got paid for this. Then we're all cool.

Tangent over. Back to game. 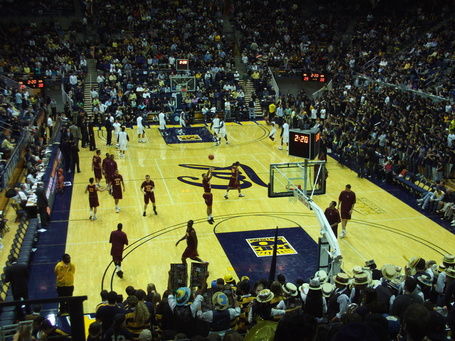 ASU practicing their shots before the second half. These would be the best looks they'd have at the basket on Saturday. 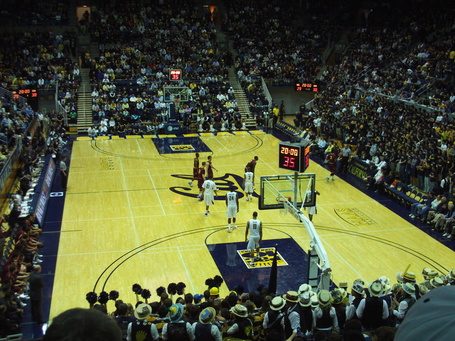 Second half gets ready. Cal is 20 minutes away from history. 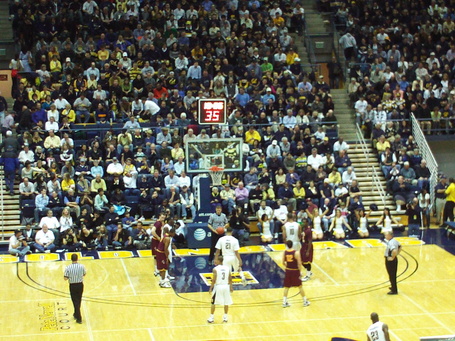 Amoke goes to the line on Cal's first possession after a Glasser layup rolls out. He's not normally the guy you'd want at the line. 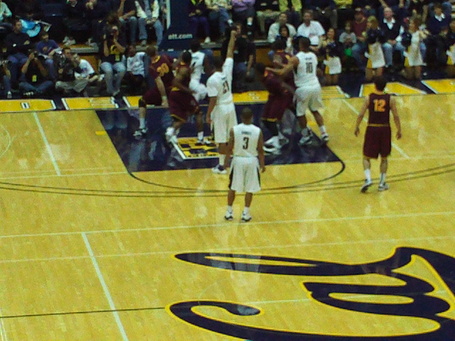 But he calmly drains both to give the Bears a lead they wouldn't relinquish. 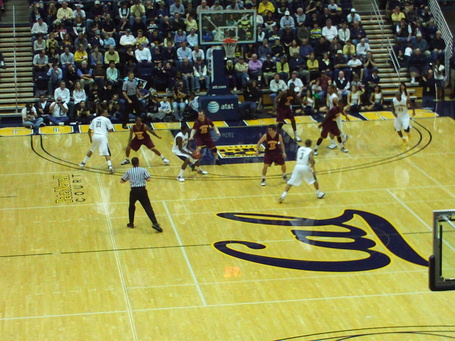 Theo gets ready to drive... 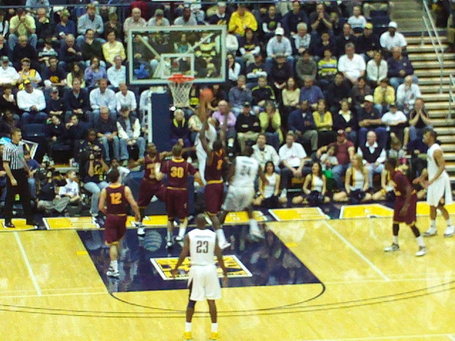 And Amoke finishes off the feed he gets. Three point Bears lead! 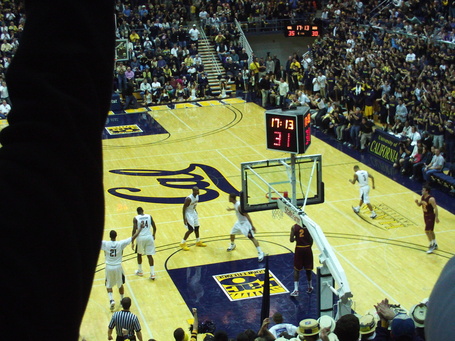 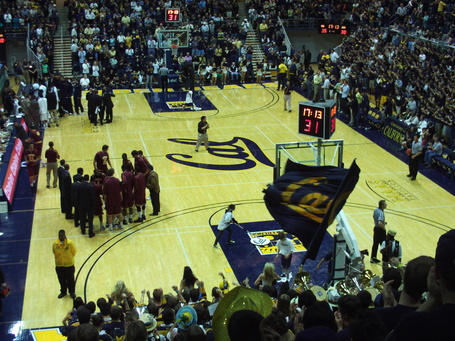 The Cal flag waves proudly, as it would for much of the game.

After that, things got a little too tense for me to keep on shooting photos, so I missed the Amoke block, Jorge being his generally stellar self, and plenty of excellent defensive moments as Cal fans started to realize that this was going to happen.

Once the outcome was at hand though, I did manage to record the final Cal home basket by our seniors. In an understated offensive game, how fitting that it was the underappreciated Theo who got the last three in this one.

After fifty years of hoops futility, Cal had finally made the Pac-10 Bear Territory. Tomorrow comes the revelry.