Is Cal Basketball's Season A Success If It Ends Tonight?

Share All sharing options for: Is Cal Basketball's Season A Success If It Ends Tonight? 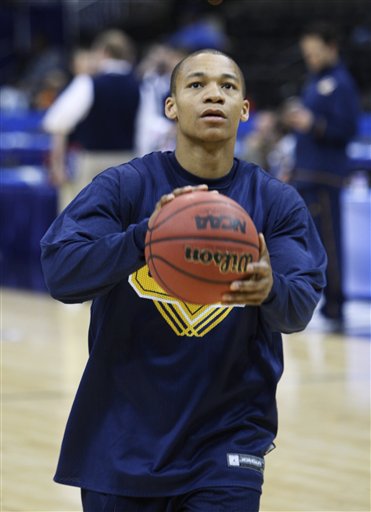 I would never wish ill on our Bears. But it's safe to say our season stands a good shot of ending this weekend. We are underdogs tonight. We're 3000 miles away from California. We're likely playing a six man rotation, maybe seven if we're lucky. We face a deep Louisville squad that can put us away with 3s and size inside. And after all that, even if we survived, we'd probably have to deal with the Dukies, who while being the weakest #1 seed in the tourney are still probably going to have plenty of rest after beating up the Pine Bluffs. The only possible scenario I see us surviving is if

(a) We go lights out against the Cardinals, take a 25-30 point lead by the middle of the second half and rest our starters for the home stretch.

(b) Duke gets stuck in a dogfight with Arkansas Pine-Bluff, leaving them exhausted and tired for our game (not likely)

(c) Duke blows Arkansas Pine-Bluff out and runs the score up in typical Coach K fashion (don't believe me? Go check the scores for some of Duke's games against their weaker foes). Dukies come in extra confident, pump their chests, just seem to be happy to have avoided Louisville. Then they get the game taken to them (possible).

Since that scenario probably has a 1 in 50 chance of happening, let's take a step back one last time and assess what our Golden Bears have accomplished, and whether we're satisfied with how far they've gone or whether we're left wanting more. I don't want to see too many sad faces because I feel this has been a successful team, even if the final result is another first round exit. The only thing unsuccessful about this year is that it would end with a loss, like another 62 teams playing in this Dance.

If Cal falls to Louisville tonight, will you consider this season a success? Or do you need to see more?

I imagine our objectives for Cal football and Cal basketball are different. For Cal football, it seems like the only type of good season these days is at least 9 wins. Period. We will soon reach the point where only a Pac-10 championship will suffice, because that is the ultimate prize that opens up the Rose Bowl. Nothing else matters. All of us are definitely happy that our Golden Bears won the Pac-10 title in hoops, but I'm pretty sure if you asked Golden Bear fans if they could get a Pac-10 hoops conference title or a ticket to Pasadena, the majority of them would be setting themselves up on Colorado Blvd. right now.

The big prize in college basketball is much different, because unlike college football there's a true national championship in place. The goal for many fans isn't the conference title, but doing well in March Madness, despite its often harsh and arbitrary nature. If Cal goes one-and-done two years in a row, I expect to see some Bears fans throw their hands up and say, "Well, they were good enough to win the weakest Pac-10 ever, but they weren't good enough to do anything else." And that would be sad. This team deserves more than that, win or lose this weekend.

Here are my big arguments for why this team is already a success, regardless of what happens in March.

They have never played as a complete unit. Literally. From the beginning, our team was cut down to 90% of its strength without Harper Kamp. Kamp was our best post defender, a guy who was slowly developing his own offensive moves, a guy who could've complemented Jamal Boykin and made the Bears a decent, if not dominant team down low. To lose Kamp was a devastating blow to our team's long-term viability to compete with the best--if we had him Cal would've run away with the Pac-10 and could've definitely won some of those big games.

On top of that, the injuries came, one-by-one. So many of them. Theo Robertson, out for three of our losses, two of which were winnable with him. Jorge Gutierrez downed for another two. Half the team catching the flu before New Mexico. It goes on. Although we didn't endure a Texas-style trip to the emergency ward, it wasn't like we ever saw Cal that much at full strength. That we managed to scrape away with a Pac-10 championship is that much more impressive.

And it looks like to complete the season we won't see Omondi Amoke either. Gives a whole new meaning to "Sturdy Golden Bears", as Rece Davis so lovably calls us.

This year's team isn't that much better than last year's. I didn't think we'd miss Jordan Wilkes that much, but Cal could have used more size with Kamp's loss. Despite all the players returning, only Boykin has made huge strides in their games from the previous seasons. Amoke, Gutierrez, Randle and Robertson have gradually improved as players, but the big leaps came last year for them. Patrick Christopher isn't much different from last year other than an uncanny nose for the boards. Nikola Knezevic and D.J. Seeley aren't that much better. Max Zhang can block a lot and dunk a bit, but he's got things to learn. And although Markhuri Sanders-Frison has helped out, he's still a little bit away from being a full-time contributor.

It's no surprise Cal has 'underachieved', at least according to the national pundits. Mike Montgomery got the most he could out of them last season, and we thought we'd see another big leap this season. In actuality, the real big leap for Cal basketball was changing from Ben Braun to Monty. It wasn't as if Phil Jackson was here guiding our Bears to a higher level of basketball consciousness. These guys have gone as far as they can go in college development.

This is a really likable group of guys. The big intangible for me. You have Randle the bulldog. You have Boykin the aspiring artist. You have Christopher, college basketball's version of Project Runaway. You have Theo, the quiet and humble worker. You have Jorge, our own version of [insert every Pac-10 defender who maxed out because of his work ethic we've faced over the years]. You feel like these guys not only personify the Cal experience, but you could probably chill with these guys for a few hours and not recognize these guys also play basketball for the school (this is also assuming you're six feet tall, since the height thing would probably give it away). You can tell they enjoy playing with each other and would love to keep on doing it for as long as they can.

Contrast that to a group like Kentucky, which has a future set of pros in John Wall, DeMarcus Cousins Patrick Patterson, Erik Bledsoe...all will be in the NBA in a year or two. But you watch them and realize that they are only good by their talent. These guys can ball, but they don't really buy into their school and often check out at the most puzzling of times. If there were no restrictions in place, they'd probably be trudging alone on the Nets and Timberwolves of the league already. They're Calipari's mercenaries, for better or for worse.

I'm not saying our guys are Rhodes Scholars or anything (although getting a Bill Bradley would be tight), but since you don't see many guys finish getting their degrees in this age of "one-and-done", it's nice to see athletes recognize there are more important things than gauging your professional worth. I thought it was worth noting that this team has five seniors who have or are on track to finishing their degrees. Pete Newell would've loved watching these guys.