A Look at the Louisville Cardinals, And How Cal Matches Up With Them

Share All sharing options for: A Look at the Louisville Cardinals, And How Cal Matches Up With Them

I'm going to go ahead and be honest here; while many of us at CGB complained that the national media was dismissive of Cal, not knowing anything about our team except that "the Pac-10 sucks", I'll freely admit that I didn't know the first thing about the Bears' opening-round opponent in the NCAA Tournament, the Louisville Cardinals, until the brackets were announced on Sunday.  Of course, not wanting to go into Friday night's matchup completely in the dark, I decided to do a little digging; here's what I found (with a few assists from Avi).

The first thing that jumped out at me about Louisville was how many three point shots this team jacked up.  They attempted 758 shots from beyond the arc this year, almost 24 per game, making just over a third of them.  Nearly 32% of their points come from long range, so if shots aren't falling, it's going to be tough for Louisville.  In contrast, the Bears attempted just 582 threes this year, about 18 per game, but managed to make over 37% of them, which still accounted for only a quarter of Cal's points, a more balanced offense.

Avinash: One reason Louisville jacks up a lot of 3s is due to the way they play defense. The full court press Pitino likes to run relies heavily on extensive defensive effort to get turnovers, which leads to easy points. Thus the big strategy is to build big leads by easy points or lots fo 3s. The 3 point shots also provide the easiest way for defenders to scramble back on a missed shot, although the propensity of misses does leave them vulnerable to a good executing halfcourt team or a team of athletes that can handle the pressure. If the Cardinals make their 3s or we don't guard against them, game over, if they don't or we force them out of their comfort zone, we can take them. 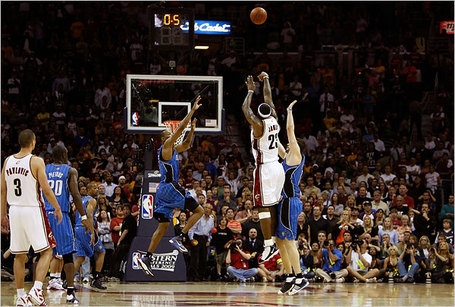 I do not want this to be the way our season ends.

ragnarok: 6' 2" senior point guard Edgar Sosa leads the charge in this regard, making 38% of the team-high 172 long-range shots he attempted.  However, six other Cardinals attempted between 19 and 42 shots this year, with 6' 5" senior Reginald Delk the only one to make more than 40%, and that's not counting little-used sophomore guard Kyle Kuric, who came off the bench to score a career-high 22-points, including 4-4 shooting from three, in Louisville's most recent upset of #1 Syracuse.  (Pitino might have Boeheim's number -- Louisville has beaten the Orange six straight times now.)

Avi: My guess to the Syracuse struggles is this is due to the lack of ball handlers to handle the press defense, and Louisville practically relies on those threes, so they shoot lights out against the zones Syracuse puts up there. A quick look at Troy Nunes is An Absolute Magician confirms that.

And Pitino might have Boeheim's number. As well as the number of Tony Delk's mother.*

One of the trouble spots for Cal has been their scrambling perimeter defense that ended with a wide open shooter nailing a 3. That strategy cost them against Washington on Saturday. Safe to say that if Patrick Christopher, Jorge Gutierrez (who I'm guessing gets a lot of Sosa when he's in) and Theo Robertson let their man by them, there will be too much scrambling and too many wide open looks for Louisville to knock down. Randle will struggle keeping Sosa in front of him, but if he can funnel him into the help defense he'll have done his job well. It'll be key for these guys to stay with their men and guard the outside as much as possible. Too many wide open looks at three for a team that lives by them is a death knell. 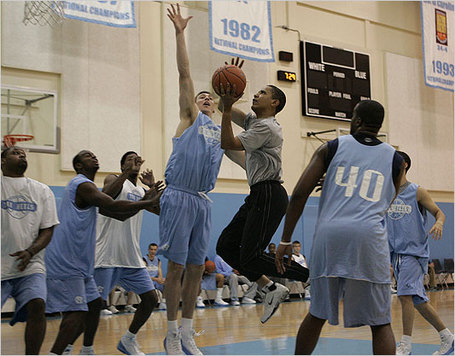 Unless Obama is taking the shot, we need to see hands in people's faces.

ragnarok: If the Cardinals are looking for some inside scoring, however, they're going to look to 6' 9" sophomore Samardo Samuels.  He leads the team in points (15.3 per game), rebounds (7.0), and minutes (just 29.2 -- no player averages more than 30 minutes per game), and at 260 lbs., he looks to be a load down low.  The Bears can probably only hope to contain Samuels, who not only shoots better than 50% (ok, so he's right next to the basket for most of those shots), but according to kenpom.com, is ranked 33rd nationally in drawing fouls, at 6.8 per 40 minutes.  Max Zhang would be a terrible matchup for this type of player, but Cal might have to send him out there if Markhuri Sanders-Frison and Omondi Amoke can't stay out of foul trouble trying to guard this guy.  Samuels has also drawn plenty of NBA interest; here's a few quotes from what a talent evaluator had to say about him last summer:

Samuels is another freshman that really struggled in the limelight -- his 3-point performance against Michigan State exposed what are likely to be his struggles as a pro. An undersized power forward without great athleticism, he plays below the rim for the most part. Put him on the floor with a tough front line like Michigan State's and he falls apart. Samuels needs to return to Louisville and prove to scouts that, despite his lack of size and explosion, he can get it done in the paint.

Samuels has certainly picked up his game since then, and while a 36-point outburst in a 2OT victory over Notre Dame certainly hints at domination, he hasn't topped 14 points in any of the seven games since then.  He does have five double-doubles on the year, however.

One thing you won't see Samuels do is block a lot of shots; his vertical game is limited (it takes a lot to get 260 lbs. up in the air -- just ask Markhuri), and he blocked just 36 shots on the year -- the same number as Zhang in three times the minutes.  6' 10" sophomore forward Terrence Jennings has 4 more blocks on the year in less than half the minutes, and is the only real shot-blocking threat on this team -- good news for Jerome Randle, who can get stuffed by athletic leapers as he attempts to take the ball to the rim.

According to kenpom's rebounding rates, the Cardinals are in the Top 20 in the country in terms of offensive rebounding, but ranked below 300 on the defensive end (again, the Bears are in the Top 100 in both categories).

Avi: This could mean good things for Boykin, Robertson and Amoke (especially Amoke) on the offensive end. On the other side, Christopher, Boykin and Amoke will be asked to do a lot. In fact I feel this could be the most underrated part of the game--Cal needs to win the boards battle and keep Louisville off the glass, preventing multiple opportunities at 3s. When you force a team to take a 3, these guys need to make sure they're in position to box out, grab what they've got, and get going. 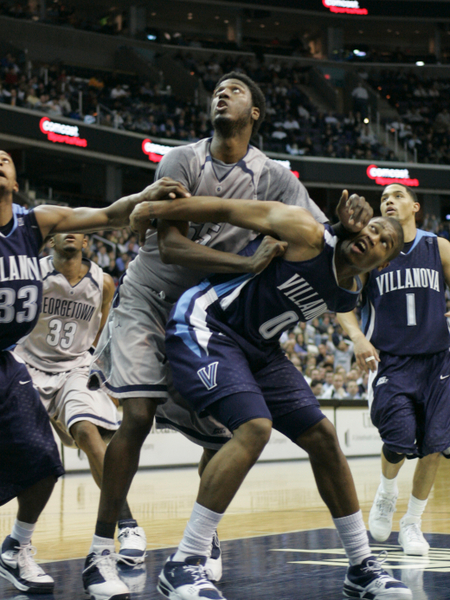 Stick your butt out guys!

ragnarok: Overall, this looks to me like an offensive-minded game, one that could turn into a shootout, and whichever team musters up the will to play a little defense will probably come out on top.  Both teams like to play at up-tempo but not lightning-quick paces, so both will be in their comfort zone in that regard.

Defensively, the Bears probably can't expect to shut down Samuels, but if they can limit his damage and keep him off the offensive glass, it'll probably be enough.  I do worry that the Bears will fail to get out on open shooters and give up some damage from long range, and one possible reason for Louisville's great offensive rebounding rate is that long shots take big bounces when the miss and may tend to get back to the offensive team at a greater rate, so limiting those opportunities will be key.

On the offensive end, Cal will almost certainly see a good amount of zone, and the key there for the Bears is patience; taking the open three when it's there is one thing, but if Cal is settling for the outside shot a third of the time or more, they could be in real trouble.

Avinash: Again, Cal's struggles with a true halfcourt zone are overrated--UCLA and Arizona State can attest. We attacked and attacked and attacked. The problem has come with disruption of the point guard, particularly Randle, which is why the Beavers have always enjoyed success against Cal--the 1-3-1 with Tarver throws Randle into a funk and he can never get into the flow. Louisville tends to run a 3-2 matchup zone, which I'll try and explain how it can hurt and help us later in the week.

ragnarok: Finally, a look at Louisville's schedule reveals a couple things.  First, Cal continues to get slammed for not beating anyone in the non-conference season, but Louisville played exactly two road games during their non-conference season, and they lost both of them (like the Bears, against good competition -- at Kentucky and at UNLV).  Their best non-con win is over Arkansas to open the season on a neutral court, but Arkansas finished 14-18 and has now completed their season -- it's a win comparable to Iowa State, and not nearly as good as the Bears' best win over Murray state.  Really, Louisville's main argument for being in the tournament (and it's a good one!) is a season sweep of Syracuse; outside of that, they beat three tournament teams -- Notre Dame in 2OT, Morgan State and East Tennessee State, all at home.  (For comparison, the Bears beat three tournament teams -- Murray State, UC Santa Barbara, and Washington, all at home).  Louisville certainly benefited from playing in a much, much better conference, which afforded them many more opportunities to pick up good wins, and they did take advantage.  One final note:  Louisville has won just four road games all season, two of them at Providence and DePaul, neither of whom has won a game since late January, so one wonders how well this team will play away from Freedom Hall.

Avi: Finally, to end the serious, here's a picture of a bear. 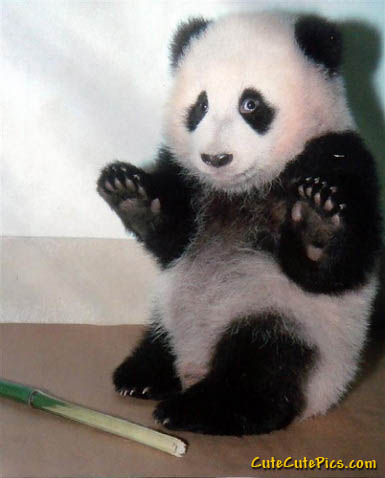 *Note: The Rick Pitino-Ms. Delk story is a work of fiction. In case you are totally dense. This is after all the Internet.