In an unusually eventful week, Cal defeated Arizona St. in one of their most impressive, complete efforts of the season.  The Bears played excellent offense and defense while managing to exorcise some demons from the regular season.  They then followed that with another lackluster loss to Stanford to finish the Pac-10 portion of their season and suffered a frightening, though ultimately minor, injury to Alexis Gray-Lawson in the process.

The bad news is that the Bears were unable to make an improbable run into the NCAA tournament.  The good news is that Cal will be hosting at least one game in the women's NIT starting...TOMORROW!  If you just can't wait til Friday to get your fix of University of California post-season basketball, show up at Haas at 7:00 on Wednesday night and let UC Davis know that they're in Bear Territory!

In two prior losses to Arizona St., the Cal women played well enough to win.  But Danielle Orsillo was able to make the plays down the stretch while Cal couldn't.  This time around, the Bears played too well in every phase of the game to lose.  In the regular season, Cal was outrebounded 42-29 and 42-31.  In the tourney the Bears pulled down 41 to ASU's 29.  In the regular season Orsillo went for 20 and 17.  In the tourney she only went for 7.  The Bears improved in a number of ways to finally knock off ASU.  But what was really exciting for me to see was the team effort the Bears made to take down the Sun Devils:

This season, Cal hasn't been the best passing team.  The Bears have recorded assists on 45.9% of their field goals, compared to 55.8% for their opponents - and the Bears play excellent defense.  A number of Bears are capable of creating their own shot or beating their opponents off the dribble, particularly Alexis Gray-Lawson and DeNesha Stallworth.  But Cal rarely creates points with crisp or creative passing.  So I was thrilled to watch Cal record 15 assists on 22 field goals (68.2%) and 9 assists on their 12 second half field goals.  Cal only scored 60 points in part because the game was slow paced and in part because Cal only had an average shooting night, but it was easily the best ball movement I've seen from Cal all season.

Perhaps my excitement should be tempered, as 8 of the 15 assists were recorded by Alexis Gray-Lawson and Natasha Vital, who will be taking their skills elsewhere soon.  Additionally, Cal will be integrating three more freshmen into the rotation next year and may face the same growing pains they faced this year.  But four different freshmen contributed assists and I couldn't help but get the sense that the team was benefiting from a slowly developed cohesion that will hopefully pay dividends in the future.

Cal also played excellent team defense, holding ASU to an eFG of 34.2 % and collected 11 steals.  Five different Bears recorded a steal and no Sun Devil recorded more than 8 points.  A particularly inspired sequence saw Cal hold ASU to just four points over 10 minutes of play late in the second half that sealed the game.  The result of this team offense and defense?  A 24-11 run over the last 12 minutes of the game to bridge a small deficit and open up the game.  Victory!

I would be remiss if I didn't briefly discuss Rachelle Federico's shocking ejection from the game late in the first half.  Rachelle is one of the smaller players on the court and would be the last player you'd ever expect to get mixed up in anything that would lead to an ejection.  I was turned away from my computer when Rachelle's elbow connected with Danielle Orsillo's head.  The refs went to the monitor to review the play for a few minutes before ejecting Mooch, and I wasn't pleased.  Apparently this ref is the exact same ref who threw Jayne Appel out of the game for an equally unintentional elbow earlier in the year, so at least the Pac-10 is consistent in their lameness.

Thanks to Craig Bennett and Swish Appeal we have spectacular time lapse photography of the incident.  You can decide for yourself: 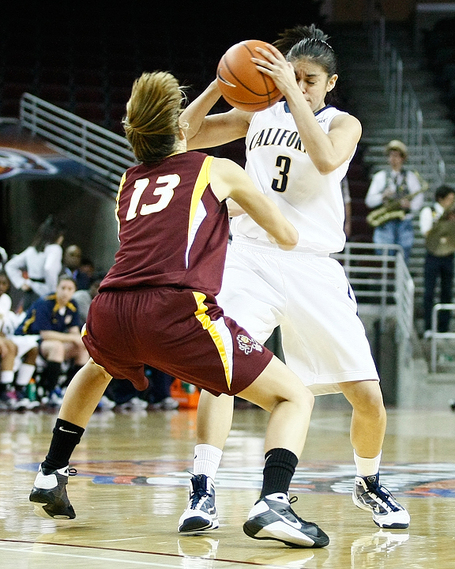 This is the picture closest to when Federico's elbow connects.  Note that her eyes are closed and the ball is between her face and Orsillo. 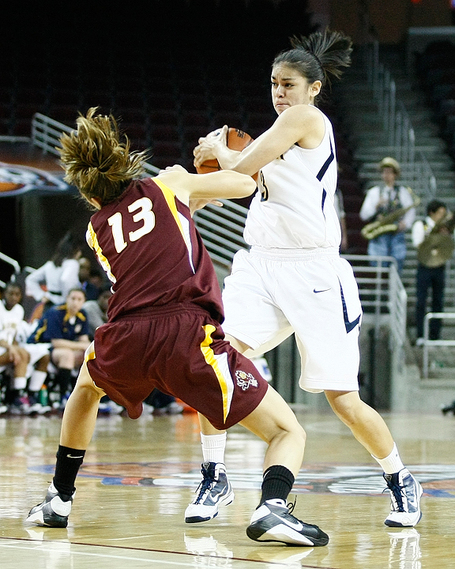 Note that Federico isn't even looking at Orsillo 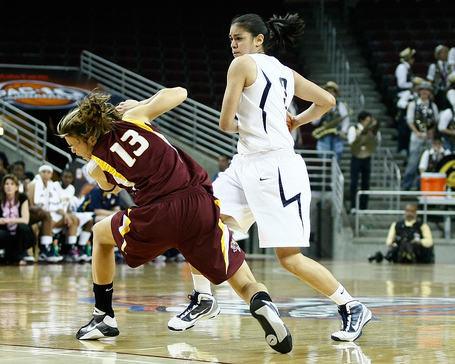 Still not looking at Orsillo 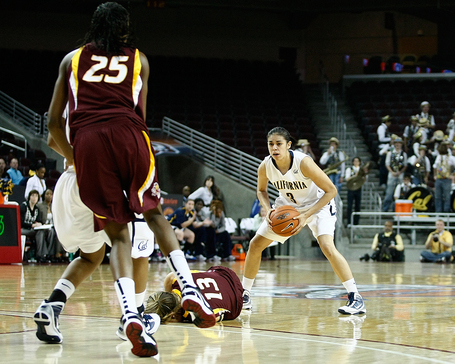 I'm pretty sure the whole time Mooch was looking for somebody to pass to since Orsillo had been guarding her so closely. 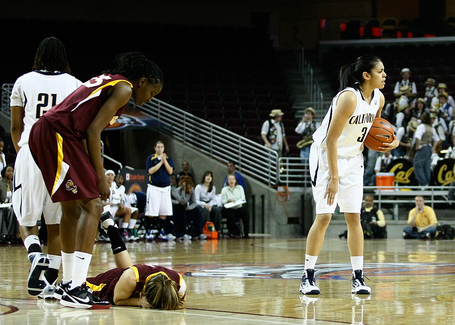 "What?  I got called for a foul?"  Also, the reactions from the Cal bench are funny.

I guess I can't prove it, but I see nothing in any of these pictures indicating intent to hit Orsillo, even as a game strategy of creating space.  Nobody has accused Mooch of that either.  The only conclusion i can reach is that the Pac-10 has some sort of asinine rule about elbows and automatic ejections.  I guess it's dangerous to put another judgment call into the hands of people who stole a game from the Washington St. men earlier this year for a stupid bench violation and left a prone Alexis Gray-Lawson on the court while play continued last Saturday.  But if players are getting thrown out of games for unintentional contact, something needs to change.  This is really no different than two players colliding in the paint or a hard foul to break up an easy layup.  Luckily the free throws and ejection didn't cost Cal the game.

I'll be honest - with Cal losing by double digits and the Cal men vs. Washington set to tip off, I abandoned the game.  I couldn't handle watching Cal get slowly strangled by the Stanford boa constrictor again.  Every problem Cal was having in their 2nd game against Stanford was evident again.  Nobody could stop Ogwumike (who can?), the Stanford defense wasn't allowing open shots, and Cal missed the few they did get.  Luckily, I didn't have the misfortune of watching a second star Cal athlete get immobilized for a head injury in the same academic year.  Calbear81 and C&R have already covered the confusing and potentially dangerous referring decision that occurred after the injury, so I don't have to rehash it.  I'm just thankful that the ultimate result of the scary incident is a sore neck that puts Lexi day-to-day for the WNIT.

Thoughts on the NCAA tournament

Admitedly, this was a down year for the Pac-10.  Apart from Stanford and Oregon this conference is filled with freshmen and sophomores who, while talented, lack the experience to create a true power conference.  Still, I found the results of the selection committee distressing because they again showed that they were entirely unimpressed with Pac-10 basketball.  It happened last year when Cal was given a 4 seed with UConn looming in the 3rd round when Cal spent most of the year ranked in the top 10 and actually beat eventual final four participant Stanford.  It happened that year when they gave Stanford a 2 seed despite a 17-1 conference record and only four losses, all on the road, to top 15 opponents.

It happened again when UCLA was given an 8 seed despite a 15-3 conference record, and when USC was snubbed despite 4 wins over teams in the tournament, including one over Fresno St., which was one of the last at-large selections.  I mean, a team with a sub .500 record in conference (North Carolina) made the tournament!  If you can finish 6-8 in your conference and make the tournament, why even have a regular season?!?  I won't shed many tears for USC, because they had chances throughout the year to improve their position and stay off the bubble.  But UCLA deserved better than a potential 2nd round date with nearly undefeated Nebraska.  This always concerns me as a Cal fan because I'm afraid of what happened to a great Cal team in 2009 may happen again.

UC Davis took the regular season Big West title but fell in the conference championship title game to UC Riverside.  Their best win was probably on the road against St. Marys, and they've lost to Stanford by 25 and WSU by 10.  This is a game that Cal should win, particularly at home.  But a number of factors could be in play, including Cal's desire to play in the NIT in the first place and Alexis Gray-Lawson's injury status.  I hope the Bears take the NIT seriously because it could be a valuable experience and they are potentially the most talented team in the field.  Let's see how deep into March we can play!