Taking On The Real Cardinals: Cal vs. Louisville Breakdown of Absolutely Nothing

Share All sharing options for: Taking On The Real Cardinals: Cal vs. Louisville Breakdown of Absolutely Nothing

There'll be plenty of time for meaningful, interesting analysis, but today we focus on the superficial, the nonsense, the stuff that means absolutely nothing. Perhaps some of this means something. Perhaps none of it means nothing. But you will be sure interested in these surface details the whole way through!

Sunshine level: Louisville fans win this going away. Cal fans seem like they'd be relatively happy with just squeaking through with this one and going the distance with Duke. Cardinals are already dreaming of shocking Duke, the establishment, and hitting up the Final Four. Chatter from their SBN site goes something like this.

I keep looking at our region and I’m trying to be really objective. I swear I am! And I’m telling you, if we find a way to win the first weekend games (BIG IF!), I can see us in the Final Four. Don’t laugh! Pitino is very very good when he knows the opponent well, and he never loses in the Sweet Sixteen. It’s the Elite Eight that trips him up. And we will likely face a Big East team there if we make it that far. OK, I’m seeing through rose-colored glasses, but this is not a tough bracket for this team! Not nearly as tough as just about any other region would have been with the same 9-seed.

I agree 100% CardsFanTX....... I think its a combination of things that could set us up for a deep tourney run

For one I feel like we got a good draw……The teams in our path are nothing were not used to night in and night out playing in the nations best conference….Two I think you will see a maximum effort from everyone knowing everythings on the line….Three we will be well rested and fresh even though I know they’ve probably been going hard in practice preparing for the tourney…And four ….. this year we will be the hunter not the hunted like last year when we had that #1 overall target on our back….Being that no one is really talking about us this year I feel that takes away alot off pressure and allows the players to play loose and relaxed which wasn’t the case last year with all the final four talk…

That "no one is really talking about us deal" isn't quite true TRUCARDFAN. Actually, most of ESPN's expert pundits have you in the second round already. The New York Times says your 'upset' of us is the easiest to pick. Dickie V's already furiously drooling over another Pitino-Coach K rematch and has already eliminated us from his East Coast addled mind. You're going to give Duke a hell of a fight because the Pac-10 only exists as a placeholder for the BEST TEAMS FROM THE BEST BASKETBALL CONFERENCE IN THE HISTORY OF HUMANITY to bowl over.

I mean, our guys sound real ready to pack it in.

"A year ago we lost our edge a little bit," Montgomery said. "The accomplishment of getting there overshadowed (our desire to succeed).

"Now I think the notion of these kids is, 'We're going to get in there and win.' We've determined who we are."

"Time has been really flying by," Jerome Randle said. "I know these are going to be the last games of my college career. The next game really could be the last game. I don't want it to be over. I'm not ready for that."

"We're not intimidated and we're confident in our abilities," Jamal Boykin said.

"Knowing it could be your last game," Patrick Christopher said, "you definitely have to be ready to bring the passion.

So don't disembowel us too badly!

Location: Sucks. As a former resident of Florida, Jacksonville is one of the worst cities in America, and it's a terrible fate for the Pac-10 champion to travel 3000 miles cross-country to do battle with likely only a token Bears audience in attendance. I'd like to be wrong, but it's JACKSONVILLE. Not Miami, not Orlando, not even freaking Tampa! You could sell a lot of young students and alum on those sites, but Jacksonville? They might as well have played the game in the middle of the swamp.

Fun fact: Jacksonville is the largest city in America by size due to city and county consolidation. Fun fact #2: Jacksonville's own Duval County has the state's largest murder rate ten years running, probably as a result of living in Jacksonville. Fun fact #3: Their NFL Jaguars team didn't sell out a single game last season until the 13-0 Colts came to town. Los Angeles, anyone? Fun fact #4: The World's Largest Outdoor Cocktail Party is the only reason to visit Jacksonville, and even that isn't that great...because it's in Jacksonville. 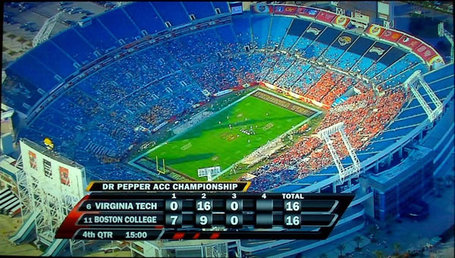 Welcome to Jacksonville, where the best place to be is not there.

Cal fans, if you're going, here is your itinerary: (1) Check into hotel Friday, preferably as late as possible. (2) Watch game. (3) If we win, go to Orlando and enjoy Theme Park X on Saturday with the kids or your friends, come back to hotel late Saturday night. Or if you're old, enjoy the millions of golf courses. If you're a student, hit the beaches. Just LEAVE JACKSONVILLE. (4) Come back Sunday and enjoy game. Checkout from hotel and bring your bags to the arena. (5) Once games are over or Cal's season ends, cheer for them. When they leave court, find airport and leave.

Louisville will certainly have more fans in attendance, as will Duke. Hopefully the awfulness of that remote Florida city will repel all visitors and Cal and Louisville will be playing in front of five hundred people (or at the very least a neutral crowd) on Friday night. Hopefully not too many Cardinals end up in this foresaken land and we don't end up playing one of those "semi-away" games we were treated to against Syracuse. And hopefully no one gets hurt. 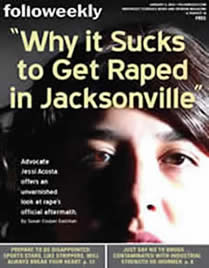 Time: Better. Although Cal isn't going to enjoy the trip East, they shouldn't get screwed the way the football team did by their 9 am sojourn to Maryland. They've gotten the best possible draw--the last games of the first round, on Friday night around 6:45 PM PST. That should give them plenty of time to rest and recover from their trip cross-country. There've been plenty of times when Pac-10 teams have had to travel cross country to play East Coast teams at early awful times and gotten drilled. It's generally a distinctly unfair advantage to be going that far, but Cal will be playing their games at a later time than some of their Thursday night tipoffs at Haas Pavilion.

Louisville, despite their intrinsic location advantage, has struggled in night games (3-6 since January), which I'm sure has plenty of correlation to nothing. 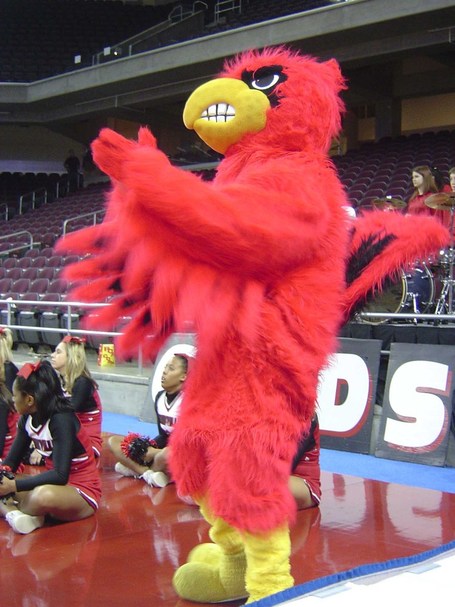 Wow, look, a real actual Cardinal. Hey, one college knows how to do it right!

Well they have a really big advantage here...over the Farm. Oski could eat this thing. 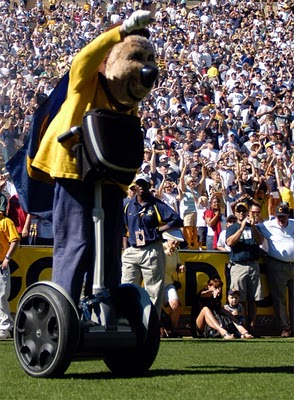 Or ride up to it at ten miles per hour and punch it in the face.

Fight song: I'll let you band people decide this. It sounds like music for a Korean War newsreel. 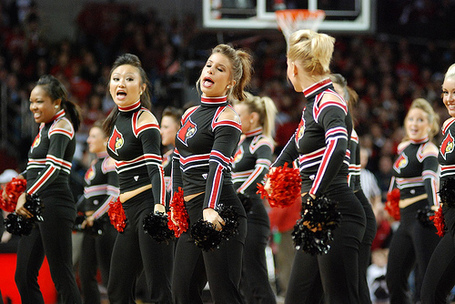 Even odds that these girls are lining stripper poles in two years in two months now.

"We want to establish some sense of normalcy, if we can use that word, in these peoples' lives."

Pitino wins for humor, and his inability to relate to the city of Boston and a sticky-as-hell quote that lives on among many sports journalists. Monty surprisingly doesn't have many interesting quotes, at least none available on the Internets. Although the Golden Bear coach does have the advantage of not being extorted by his former lover.

(And Gregg Doyel wins for being an everlasting douche to Greg Oden. Well, for that and many, many other things.)

Best alumni in the NBA: Cal currently has at least four players in the NBA, as does Louisville. Jason Kidd's still doing his thing and Leon Powe's back in action. The Cardinals have Francisco Garcia for the Sacramento Kings, who has 10 points every now and then, and Terrence Williams, who's averaging double digits in March on a seven win Nets team. Slight advantage to Cal here.

Funniest player on the team. Like most things with our Bears, they can only be funny together.

Sorry Bears, but Edgar Sosa might have all of them beat for originality.

College commercial: Lots of things could beat our commercial. Those Old Spice ads. Miller Lite ads. The Warriors. Let's see what Louisville came up with...

Wait. Was that the whole commercial???

Ownage of conference's other schools in tournament games that quite possibly have no relation to the one being played Friday. Card Chronicle's on top of it.

Extrapolating from that data, looks like the final score will be Louisville 91, Cal 66. Sweet, my Friday night just oppened up!

Corporate whoring: Cal gets a lot of their equipment from Nike, and many teams around the country have at least complimented us on our fine uniforms. But Louisville takes the cake--their football stadium is called the Louisville Papa John's Stadium. It's a good thing they have three fully staffed first aid centers and a trauma center inside the stadium, because their cholesterol-rising cheese is sure to send many of their fans into cardiac arrest. 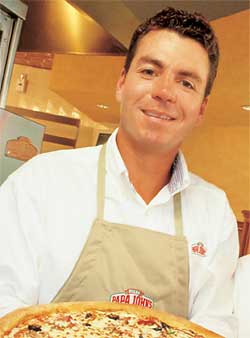