Yes, the Bears did get to win something later, but Saturday was also about the seniors lacing it up for the last time at Haas. Jamal Boykin, Patrick Christopher, Nikola Knezevic, Jerome Randle, Theo Robertson all played their final games at Cal this weekend, and they were honored appropriately before the game.

I know Jim McGill already has the Senior Day video up for your viewing enjoyment, but hey, I shot video too! So if you want higher-quality but unsteady, vomit-inducing clips, check out what's below and what's beyond!

First came Boykin smiling ear to ear and looking like he wanted to bear hug the crowd (he came close!), then Christopher looking smooth as silk, as if winning a conference title was the most natural thing in the world.

Some sitting old person told me to move (I love old people), so I had to move and shoot it into two spots.  Nikola emerged with his European entourage, Randle couldn't hold back the tears, Theo's did his whole modesty thing ("Wait, what? What did I do?"). They're a unique set of guys we're losing. No matter what happens from here on out, we're going to miss them a lot. You don't replace guys like these overnight. It took four to five long years of molding and evolving to get them to this point, and it's paid off with a conference title.

After the jump, more pregame stuff, including video of the Cal Band, a nice little PC shootaround dunk, and plenty of photos!

The Bears go through their final shootaround on their homecourt. Cal finished the season 15-1 at home.

There was a sick Christopher dunk I missed, but thankfully someone else found it! Boy's got hops.

The Cal Straw Hat Band comes out for their final home performance of the year. I have to admit, I'm pretty indifferent to the Cal band in general, but they're really fun inside a basketball arena. Maybe it's the noise amplification factor, where the brass resonates through the stands. Also, I really love how they start booming into the visitor's huddle during every timeout. 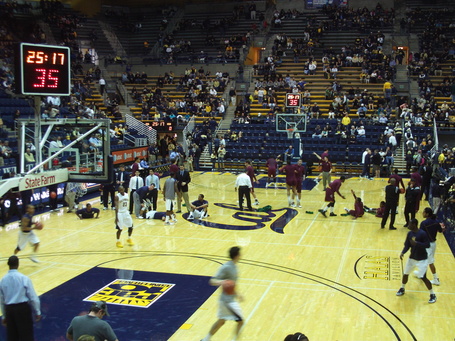 It's the calm before the storm. Guys are shooting. Others are stretching. Some are just talking. Just seems like any other game... 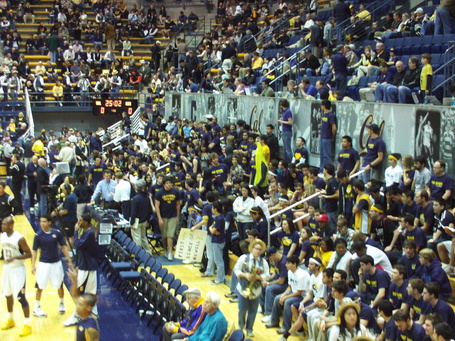 The Bench was nice and full early on. The students were pumped and already making noise during warmups. They knew the stakes. They knew what was up. No denying the Golden Nerds (and I mean that in the most affectionate way possible) from yelling and screaming their heads off for forty minutes and change. 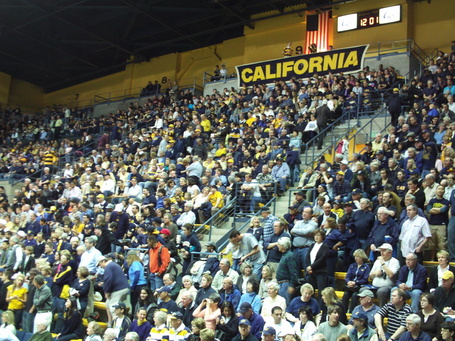 No empty seats for the baseliners either. The nosebleeds were filled up with Blue and Gold! 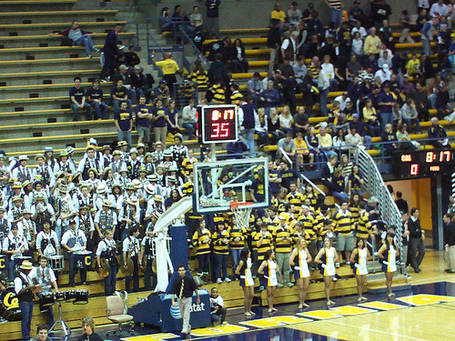 But where are the rest of the students? Only eight minutes left!!! (They'd all start coming, but only around tipoff, and they were a bit sleepy for the most part. I blame the Saturday noon tipoff, which might as well have been 8 AM for Cal students. Kids really are partying these Friday nights up aren't they?) 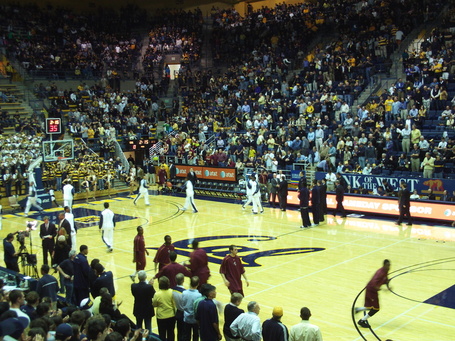 If you look toward the bottom of this photo, I believe you see the back of Kevin Johnson's head. Sean Lampley is also along the front row, closer to midcourt. Didn't know that Scott Fujita was here, and I totally missed out on one of my favorite NBA southpaws, Tayshaun Prince, who I believe is Christopher's godbrother (He passed by me after the game though. Too stunned to even ask for an autograph.). 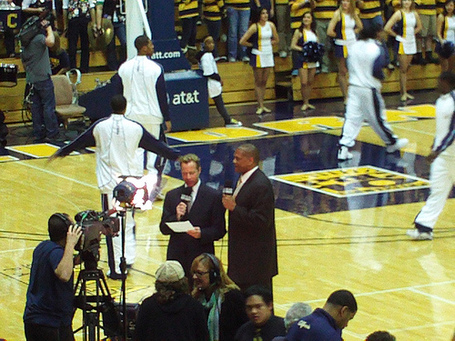 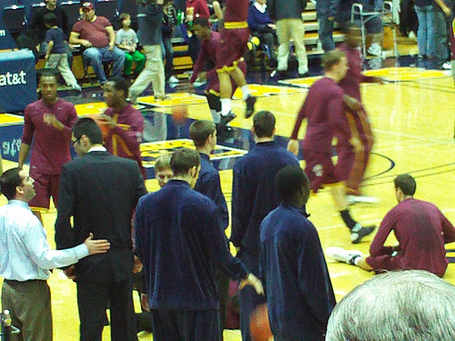 Max Zhang is dressed to impress for this one (via Flickr); you know it's a big affair when Max looks ready for a conference call. PC's clearly been giving the Great Wall some fashion tips. 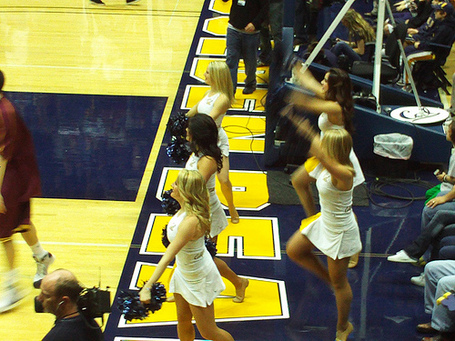 Cal dance team, doing their thing. Just like our athletes, our dancers are evolving into conference champions! Watch out Ducks, we're coming for you! 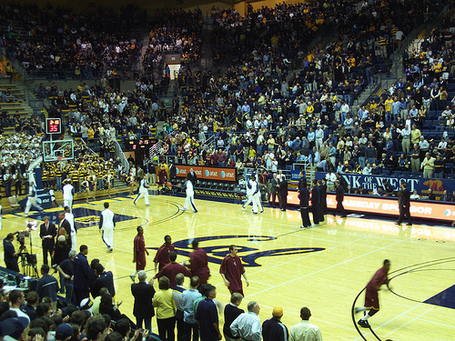 (via Flickr)
Players switch sides of the court to practice on their starting ends. Only two minutes left before the battle for the Pac-10 commences and Haas is filling up quick...