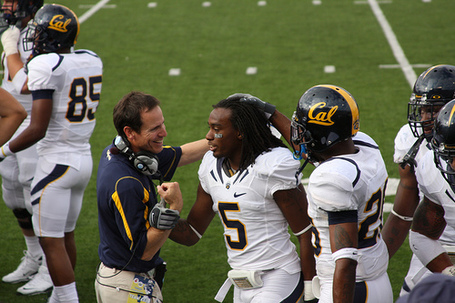 I gotta admit, it's going to be strange watching the Cal defense this fall without Bob Gregory making the calls. Gregory was the last stalwart from the 2002 Tedford makeover (not including Ron Gould, who predates Tedford), and he had become just as much a fixture on the Golden Bear landscape as our esteemed head caoch. When fans got emotional about the results on the field, they rushed to point fingers not just at the head coach but his primary lieutenant--some of it fair, but much of it probably unjust. We're all going to have to adjust to this strange new world that might not include the terms BBDB, 3 man rushes, and whatever else Old and Young Blues alike have griped about on D for nearly a decade.

We would never see Gregory do any of the typical coaching cliche things. There was nothing unorthodox about the way he went after other teams--personnel would dictate scheme. In other words, if we had good players our defense would rock. If it didn't, it would get rocked.

As fans, we've probably felt that way the past three years. We would see our team jump out to a 14-0 lead, then the Bears would drop eight into soft zone coverage and try to protect the big play. VandyImport pointed out the co-dependency between offense and defense.

I think more than “bend but don’t break,” Gregory’s success was largely dependent on…the offense. When you can rack almost 40 minutes ToP and hang five touchdowns a game, it frees the defense to wheel and deal and be fresh later and more visually spectacular. Ever since the meltdown of 2007, the defense hasn’t had any help to speak of; the 2008 team could make it up on talent but that obviously wasn’t there this year in the same measure.

I don't say that as an indictment of poor defensive coaching; it was just the way Gregory did things (and the way a LOT of DCs do their business)--make them work for the lead rather than taking too many risks. Whether this approach discouraged our defense is something that anyone can debate, but how many times have you seen our defense fall apart late in games?

Gregory never struck me as a great coordinator or a bad one. He always seemed... I guess 'adequate' was the best word. I was never awed by his defensive strategies. Most of us casual fans could predict a lot of what was coming (play heavy against the run on 1st and 2nd down, drop into coverage on 3rd down; if we saw anything different from that it was a total surprise). I could feel what the offense was trying to do to counteract that, and we all just hoped it worked out for the best.

For a long time it did, but it looks like this past season other teams finally figured out how to exploit his tendencies. Perhaps it was the perfect time for him to move on--with the Pac-10 trending younger and with new and fresh blood coming in, it seems like a good time for Cal to change direction and move forward with a different, more aggressive approach. Tosh Lupoi and Tedford have both hinted at such changes since the end of the season; Gregory's departure will probably hasten the movement.

As a Cal fan, you always knew what you were getting from Gregory's defenses. He always made it clear his first job was to stop the run. With a brief interlude in the middle of the decade, they did that very well.

But what about the other side?

Eh. You can see that Cal was more than happy to give up the short pass, and banked on our guys forcing turnovers and punts to stop the offense in its tracks. This strategy worked out alright in 2006 and 2008, but fell apart in 2007 and 2009 when we faced pretty good quarterbacks who protected the ball and coaches with better designed gameplans. Jake Locker, Jeremiah Masoli, Jordan Wynn, Sean Canfield, Willie Tuitama, Chris Turner all torched the zones, and the Bears let these crucial games slip out of their reach. Although last year could've been an anomaly, we have seen peculiar meltdowns of this sort before against average to mediocre quarterbacks (couple that with our recent QB struggles and it's no wonder Cal fans always grumbled about Gregory's gameplans).
Now that he's gone though, let's also remember the positive things we have of Cal's defense under his tenure. In 2004 his defense shut down the best USC team of the decade, holding them to a mere 23 points and giving Aaron Rodgers the chances he needed to pull us to victory; in 2005 they held the unstoppable USC offense to their lowest output of he season. They blanked the state of Arizona through three meetings in 2004 and 2005. They obliterated a surging 5-0 Oregon team in 2006 and took advantage of every break to beat them in 2007. In 2008 they flexed their muscle again in a new 3-4 set...only to again have the misfortune of rolling through the best USC defense of the decade and dealing with a handicapped offense on the other side. And they made one final hurrah in 2009, shutting down a scorching Cardinal offense to recapture the Axe.

We've also had a lot of good players pass through during our time, many of them who sailed off toward the pros. Brendan Mebane, Desmond Bishop, Zack Follett, Dante Hughes, Thomas Decoud, Matt Giordano, Lorenzo Alexander, and what looks to be two more in Tyson Alualu and Syd'Quan Thompson--all of them have been or could be playing on Sunday, and it's hard to say Gregory didn't play an integral part in their development. Not many defensive coordinators in college can say they put that many players in the pros. We've had a lot of special individual defenders pass through Memorial this past decade, and Gregory is partly responsible for bringing them in and teaching them what they need to succeed at the next level. This sticking point of developing pro athletes will hopefully resonate with future recruits, and will remain our former DC's most lasting accomplishment.

So, will we miss Gregory? California Pete probably put into words what most fans were feeling.

Gregory was a very solid coach for Cal, and I’m one of many who think his defenses were under-rated, especially 2005’s. He was instrumental in helping Tedford create the Cal program that exists today, and his contributions should always be appreciated.

That said, I’m not super concerned by his departure, whatever the reasons. With a stellar recruiting class about to arrive, along with new facilities and a suddenly wide-open Pac-10 now that Carroll’s dominant Trojans are no more, this might be the ideal time to start afresh.

It's a strange new world for Cal fans. Who knows what surprises lie ahead.