My perspectives of Tedford & Co's performance on National Signing Day pretty much pale in comparison to what has transpired on CGB (LINK). Nevertheless, let me present a different take on the Class of 2010 and how they will contribute on Saturdays, starting with the offense and then defense. 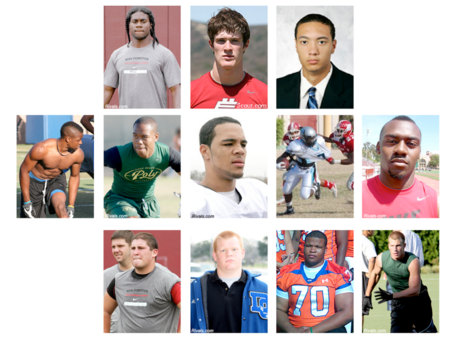 photos via Scout.com, Rivals.com, University of Buffalo Athletics, and MaxPreps.com

After the jump, we will examine Tedford & Co's needs on offense and present a hypothetical scenario for the future:

Jahvid Best was one of the most electrifying players in memory. The loss of Jahvid to the NFL is offset by the emergence of Shane Vereen. Coach Ludwig is going to need other players step up on offense to complement Vereen's running attack. Marvin Jones and Anthony Miller may be close.

What is really going to be missed about this group of outgoing seniors is blocking. Nyan Boateng and Verran Tucker were fine downfield blockers. Skylar Curran and Brian Holley were unsung heroes of the 2009 team protecting Kevin Riley and opening up running lanes for Jahvid and Shane. Skylar had a memorable Senior Day game, catching a key TD against the AZ Wildcats. Brian should have received more attention for the job he did stepping into the shoes of Will Ta'ufo'ou.

Immediate needs: More playmakers besides Vereen in the passing game 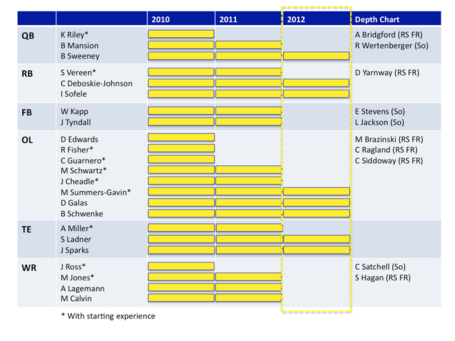 Eligibility data and depth chart are taken from the active Cal roster (updated late December/January). Notable redshirt freshmen (RS FR) are included in the depth chart since they may be ready to contribute in 2010.

Richard Fisher started one game in the absence of Matt Summers-Gavin. Jeremy Ross started games in 2008.

Looking ahead to the 2012 season (dotted box), the Cal offense will have discontinuities at WR and FB. Ross, Jones, Alex Lagemann, and Michael Calvin will graduate or depart by 2012. RB has the most depth for 2010 with Vereen, Covaughn Deboskie-Johnson, Isi Sofele, and Dasarte Yarnway, QB, OL and TE depth are staggered to add more depth in recruiting cycles.

Now we are ready to discuss how Tedford & Co met  needs with 2010 Golden Bears on offense.

Playmakers: It appears that the coaching staff has purposely recruited for speed at the WR position (LINK). Coleman Edmond (CGB interview), Tevin Carter, and Kaelin Clay are capable track stars with excellent speed. In his Signing Day press conference, Tedford told us that yards after catch was a special emphasis during recruiting. The 2010 WR class should be a big step toward addressing the need for new playmakers in the passing game.

Marvin Jones appears to have a starting WR spot locked down. Edmond, Carter, Allen, Montgomery, and Clay will compete against the incumbents of J Ross, Loggy, and Calvin. Spencer Hagan and Charles Satchell are big receivers currently sitting on the depth chart. Edmond may be most ready to contribute from the 2010 class both at WR and special teams with his physicality and toughness (HL). Keenan Allen appears to have excellent hands and ball skills. I would speculate that if the 2010 WR recruits do not want to redshirt, they need to stand out in learning routes and downfield blocking.

Another consideration is Isi Sofele, a potential breakout player already on the squad. Word is that Isi is staying at RB and not moving to WR (LINK). His speed and elusiveness at the punt/kick returner position should add more intrigue to Spring Practice with the new Special Teams/Tight Ends Coach Jeff Genyk. Personally, I would like to see another punt/kick returner from the 2010 class on special teams to spell relief for J Ross. Maybe if J Ross does less he'll hold onto more passes in 2010.

More WRs: The group of Carter, Allen, Montgomery, and Clay all have different styles of play. ttgiang15's fine analyses on Edmond, Montgomery, and Clay (LINK, LINK, LINK) are worth the time to go over. It's fascinating how Montgomery creates separation between himself and defenders on tape because he is not the fastest, strongest, and tallest guy on the field. He doesn't shy away from contact which should help him lining up in the slot. Tevin Carter (HL) already looks like a young Randy Moss on tape, creating match-up problems with his size and speed.

I have not been able to find more highlights on Keenan Allen (HL). He doesn't look to have the speed of Carter or Clay, but has good vision and quickness to make cuts that take advantage of open spaces. His length is going to bother a lot of DBs in redzone situations, almost like $C's Dwayne Jarrett.

Other positions: Austin Hinder (HL) and Jacob Wark (HL) are prospects who should provide more competition and depth. Hinder is a work-in-progress. Because of his slim physical statue, Hinder is almost 100% sure to redshirt. The comparison of Wark to Craig Stevens is fair. As Tedford described, Wark doesn't go down immediately after contact and is "violent" after the catch.

No FB was recruited this year. There are two possible interpretations. Eric Stevens is someone Tedford had made a note of before (LINK), and Langston Jackson could move back to FB. In general though FB doesn't seem to be a priority in Tedford & Co's overall recruiting. We could be fine with Stevens or Jackson competing for a starting spot in 2012.

Tedford & Co added a trio of OLs in Chris Adcock (Sr, Jr HLs), Alex Croswaithe (HL), and Geoffrey Gibson (HL). Gibson is somewhat less heralded compared to Adcock and Croswaithe. He is another strong physical presence who controls the point of attack and sustains his blocks well. Coach Marshall should be happy about the talent he gets to develop along with RS FRs of Charles Ragland, Charles Siddoway, and Mark Brazinski. 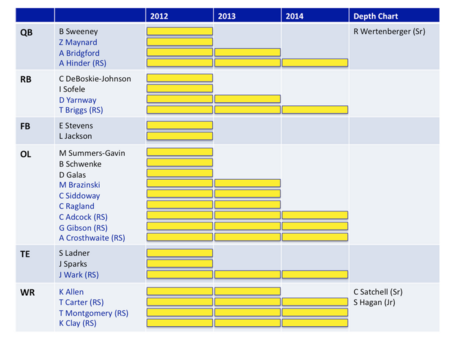 The 2012 eligibility map assumes the RS FRs and 2010 class (in blue letters) all become major contributors. Many things can happen - players leaving early for the NFL, injuries, redshirts, etc. I am only projecting what I believe will most likely take place.

I think Sofele becomes a change-of-pace RB to complement the more powerful backs of DeBoskie-Johnson/Yarnway/Briggs. Briggs is "greenshirting" and should participate in Spring Practice staring March 6th. If Briggs can't climb up the depth chart ahead of DeBo and Yarnway, I think he redshirts in 2010 and seeks an extra year to distinguish himself in the same manner as Justin Forsett. Adcock, Crosthwaite, and Gibson will probably all redshirt like the OLs in the 2009 class besides Brian Schwenke.

The  2012 QB is going to be the biggest concern. If Beau Sweeney doesn't seize control of the starting QB position in 2010 or 2011, Zach Maynard could emerge as an option (HT dballisloose). Allan Bridgford & Hinder should also be in the mix for 2012.

WRs are more difficult to project. Keenan Allen probably won't redshirt because of his versatility as a wideout and nickelback in pass coverage. There isn't enough video evidence supporting that Carter can beat more powerful and speedy CBs in the Pac-10 who will want to jam him at the line and knock him off his route. I would think Carter redshirts along with Montgomery and Clay.

Final thoughts: Rather than focusing on individual talent, I think it's more important to take the team approach to evaluate recruiting classes. Tedford & Co's job is to put the most competitive team on the field year in and year out. 5-star talents would be great if they want to fit in and excel in the system. The 2010 class of the Golden Bears meets the team's needs and sets up Tedford & Co with talent and depth on offense for the 2012 season when Memorial Stadium reopens.  FB seems to be the only position not addressed the 2010 recruiting. The history of Will Ta'ufo'ou and Brian Holley would suggest that Tedford & Co seems to prefer a developmental process for FBs.

Regarding the lack of a LT in 2010 recruiting, the eligibility maps show that there is enough depth in development on the OL for a LT candidate to emerge through competition in 2010 and 2012. Granted, it would have been great to obtain the services of Arie Kouandjio or Roszell Gayden, but Tedford & Co systematically replenish the team with new recruits. 2011 scholarship offers have already gone out to Cyrus Kouandjio (LINK) and Christian Westerman (LINK). I am sure we are going to hear more.