As Jerome Randle goes, so do the Bears.

A month ago in Seattle, the Bears were blown out of Hec Ed, a dismal Saturday morning performance in which the Bears looked lost, flustered by UW's pressure, impotent on offense and on their heels on defense.  Jerome Randle, injured late the previous Thursday night at the end of a 39-point clinic at Washington State, limped around the court, lacking the necessary quickness to either get by defenders and into the lane or to slow down UW's lightning-quick transition offense.  Only a slew of Husky fouls allowed the Bears to keep the final score somewhat respectable; the truth is, they were never in that game.

Last night, as the venue switched to Berkeley, so did the fortunes of the Cal Basketball team.  A healthy Jerome Randle may not have dominated Isaiah Thomas (Thomas still managed 25 points, many of them late), but neither was Thomas much of a hindrance to Randle, who showed off all the moves that make him such a dominating player, hitting big threes from deep, driving to the basket for easy layups, and even one circus shot where Randle basically shovel-passed a prayer from outside the left side of the line only to watch it go in off the glass.  We may be getting used to those kind of ridiculous shots from Jerome, but the smile on his face after it went in betrayed even his incredulity; he probably hasn't made that shot since he was 13, on a playground somewhere in Chicago.

(Editor's note:  this post was written jointly by myself and CBKWit after the game at Raleigh's Manny's Tap Room.  If you were there last night and saw two nerdy guys punching away at a laptop in a room full of drunk college students, that was us.)

Unable to hold down Randle (33 points) or the Cal offense (93), UW fell behind by double-digits midway through the first-half and never got it closer than 9 the rest of the way.  The Huskies can run and they can score, there's no doubt about that, but they had no answer for a Cal offense that demonstrated both excellent ball movement and uncharacteristic patience -- other than a couple of possessions, the Bears almost never took a contested shot with more than 15 ticks left on the shot-clock.  The Bears kept the turnovers low and the effort high, and that effort was what kept UW from ever really getting back into this game.

For as great as the offense was last night (and it was), that was nothing unusual for our Bears.  What I want to note instead was the yeoman's work the Bears did in the half court defense; if Cal could slow down UW's transition offense (and that wasn't always the case -- the Huskies managed to score a transition bucket after a MADE basket by the Bears), the Huskies were pretty invariably left with a tough shot and no rebound.  The Bears came out and made it a team mission to rebound the basketball, and that, as much as anything else, is what helped them build the first half lead that would never really be in jeopardy. 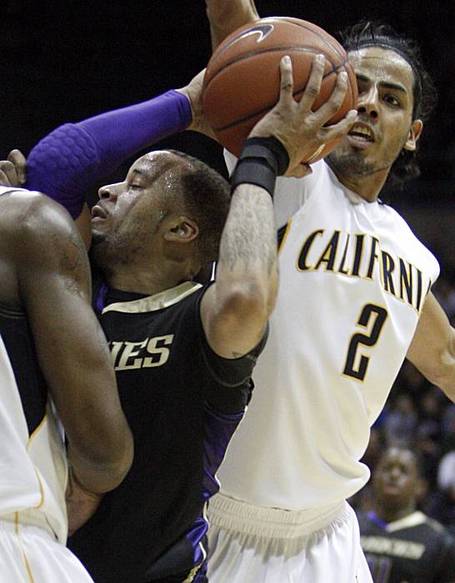 One thing that puzzled both of us was UW's lack of pressure defense.  UW started using a full court press with about 7 or 8 minutes left in the game (while down 17 - at that point, what do you have to lose?) with moderate success.  UW created a few turnovers but Cal was able to get a few easy buckets as well.  The pressure did speed up the game, which was the only way UW was going to have a chance at winning.

More curious than the lack of full court pressure was the lack of the hyper-aggressive man defense by the Huskies.  This created all kinds of problems for Cal in Seattle, but the Huskies did not remotely duplicate their defensive intensity from a month ago.  Maybe UW didn't want Cal shooting 50 free throws again, figuring that the Bears would hit their freebies this time (they did).  Maybe they were afraid of a healthy Randle breaking down the defense, and rightfully so - Randle penetrated a sagging Husky defense seemingly at will.  For whatever reason, UW did not take their defense to the Bears like they did last time, and Cal's offense, which was abysmal in Seattle, looked fantastic.

UW wins games (at home - 355 days without a true road win and counting) by getting out in transition and hitting the offensive glass.  The Bears did a much better job slowing down UW's transition offense than they did a month ago - it's a lot easier to stop transition offense when you don't turn the ball over, and the Bears only had 13 turnovers at Haas, compared to 21 in Seattle.  A lot of that falls to Randle, who had 8 turnovers in a miserable game in Seattle but just 2 while completing dominating last night.  In addition to limiting transition opportunities, the Bears did a much better job getting back when the Huskies were on the break.

The Bears' transition defense was critical, but their defensive rebounding was even more important.  UW has better athletes than Cal in their front court - witness two spectacularly athletic blocks by the Huskies, which were correctly called goaltending - and these athletes crash the offensive glass hard.  Cal did a fantastic job grabbing defensive rebounds and keeping Pondexter and Co. from creating second chance opportunities.  Meanwhile, with Cal's best (by far) offensive rebounder Omondi Amoke on the bench with 2 fouls, the Bears somehow came up with a bevy of their own offensive rebounds.  UW eventually closed the gap in the offensive rebounding battle (11 for the Bears, 8 for the Huskies), as they picked up several in the last ten minutes of the game as they were selling out to mount a comeback, but Cal did a better job rebounding on both ends of the floor while the game was in question. 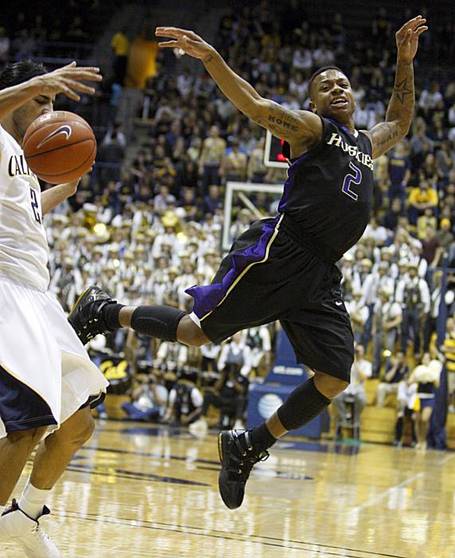 Jamal Boykin deserves much of the credit.  If Randle was the Maestro perfectly controlling Cal's offense and systematically destroying the Huskies (I'm pretty sure I saw Randle give (#22 Justin Holiday??) a chinese balm during the post game handshakes after burning him all game), then Boykin was the principal violinist, performing his role at a very high level.  Boykin shot a great percentage from the floor and made 8 of 9 free throws to boot.  He scored on jumpers and a variety of double and triple moves around the hoop.  He was a monster on the boards.  Randle gets the game ball, but Boykin was second in line.

Theo Robertson struggled on offense, missing a wide open three and turning the ball over 3 or 4 times, but he did a nice job defensively on Quincy Pondexter.  Pondexter has (finally) developed a nice offensive game and Robertson did not make it easy for him.

Christopher also had a tough defensive assignment, drawing Isaiah Thomas for much of the game.  Thomas got his points eventually but was generally out of sync.  And while Christopher also didn't do a ton offensively, he again put the exclamation point on the victory with an alley-oop from Randle with two minutes to go.  When Cal is up at the end of games, teams will over play Randle to try to get a steal.  When Randle gets around these defenders into the lane, the wing defenders will rotate to stop him, leaving Christopher open with a running start from the corner.  Randle and Christopher look for the alley-oop in this situation, and it absolutely brought the house down tonight.

Speaking of the crowd, it seems like people read Ragnarok's plea a couple days ago, because Haas was better than it's been all year.  It's still not nearly good enough - there are a lot of empty seats in the upper rows at the south end - but there were more people, and there was more energy from those that did show.  Like UW, WSU is also a young team, and Cal will have a serious advantage on Saturday when we show up.  So show up and be loud, people!

I don't know who's going to win the Pac-10 this year, but it ain't gonna be Washington.

Is it premature to sound the death knell for the Huskies?  Perhaps.  But Washington, still winless on the road this season, are now two games back of Cal with just six to play, and with likelihood of Cal dropping more than two games down the stretch while UW runs the table (they have four more games on the road, BTW) just seems slimmer and slimmer.  Moreover, the best teams left on Cal's schedule are the Arizona schools, who besides a trip to Haas both have a very favorable stretch run.  So even if Cal does stumble, the Huskies still need both Arizona schools to lose another game or two each.  Realistically, if Washington is going to win the Pac-10, Husky fans better are going to have to do something distasteful and root hard for Oregon -- the Ducks visit ASU this Saturday, and host Cal next weekend.

But for the Bears, none of that matters if they don't take care of Washington State on Saturday.  So, to reiterate, get your butt out to Haas and make some noise -- and this time, drag a couple friends along with you!