Well, then!  The San Francisco Giants are the Champions of the World (he exclaimed through gritted teeth).  But one of the best part of that whole situation is that the World Series Championship Parade was led by the one, the only, the best damn band in the land, the California Marching Band.

Well, we went back to the source on this:  California Marching Band Student Director Thomas Gartner.  We spoke with him previously regarding his role at the StuD.  He was kind enough to answer some of our questions about the Cal Band's role at the World Series Championship parade.  After the jump, see his answers to our questions.  Many thanks to Mr. Gartner for his help with this.  Feel free to donate to the band to help them continue to be as unquestionably awesome as they always are.

1. Was it difficult getting time off from academic responsibilities for the band members?  How accommodating is the university with regards to sanctioned band activities?(Big Game week must be rather tough.)

Many of us (including myself) were excused from midterms to attend this event. Usually a great deal of notice is required before professors will allow missing class for a sporting event, but I think most professors realized that this is a once-in-a-lifetime event, and many were very lenient about us missing class. The Giants called us on Monday, and we had around 90 people organized and ready Wednesday morning. I thought the whole thing went pretty well for slapping a parade together in two days.
2.  How early did you have to bus over?
We left Berkeley at 8:30am, and got to the parade staging area (at Montgomery and Washington streets) around 9:15. The parade started at 11am
3.  What did you do after you reached the end of the parade route?
The parade organizers herded us into an area just in front of the stage where they held the post-parade rally at city hall. We got essentially front-row seats for the rally, and were probably only 100 feet away from Aubrey Huff when he pulled the rally thong out of his pants.

4. What songs did you play?

All the Journey we could muster. Don't Stop Believing and Lights were mainstays
6.  Did you meet any of the players?

I didn't, although many of our members did. I did get to meet the broadcasting crew, however, as their cars were just behind us in the parade route.
7.  Did you get to touch the World Series Trophy?
I wish- although we saw it from only a few feet away.
8.  How did the band select who would go in the parade block?
We took everyone who was available to go- the Giants sent us two buses, and we were able to almost fill them.
9.  Any special continuities for this specific Parade?
Well the trumpets have a "Brian Wilson" continuity, where they throw a pitch, and then cross their arms in imitation of the move that Brian Wilson makes when he closes out games. I think it was a hit.

10.  What interested you personally in being a part of this parade?
I've been a Giants fan for as long as I can remember, and the fact that the Giants hadn't won since the fifties made this a can't-miss event for me. I would have considered skipping my midterm even if my professor hadn't given his blessing.

11.  Any cool photos?
We were on the berkeley.edu home page for a couple of days after the parade, as well as this cool aerial shot: 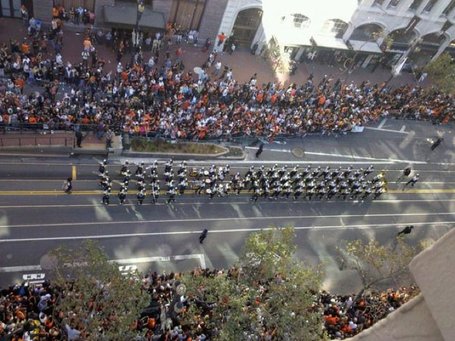 12.  Wasn't the reason the Cal band was invited was that San Francisco Giants Vice President Larry Baer is a Cal alum?
I think that had a lot to do with it- word on the street is that a lot of people in the Giants organization are Golden Bears.
13.  Were any band members who might root for a rival of the Giants and therefore not really care for the team forced to come and play in their parade anyway, or could they skip out if they had philosophical objections?
All fans of unnamed rival teams were waterboarded and forced to renounce all allegiance to their former rooting interest. All are happy Giants fans now...
15.  What was the crowd reaction for you? Did any fans of schools not as cool as Cal heckle you?
The crowd was INCREDIBLE. I think that most of them had no idea who we were, but they definitely responded to our energy, and the yelling and screaming was electric. I will always remember marching through falling confetti as 1million+ screamed along with us. It was indescribable.