Share All sharing options for: Fantasy Week in Review - Week 9

the only reason to pick against Cal

Every time I pick against Cal they crush their opponent. I will keep doing so until they do not.

If true, I suppose that's a valid enough reason.  Maybe.

This week was a big bucket full of fail.

Oh noes, my stranglehold on first in the West division has slipped away! 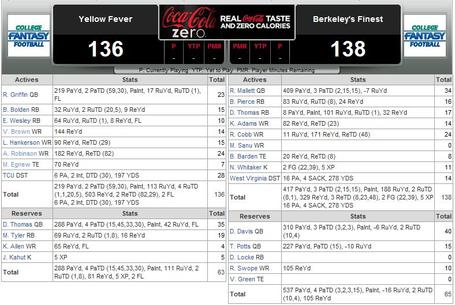 Berkeley's Finest defeated Yellow Fever 138-136 as I did my best Ron Washington impersonation by forgetting to employ a kicker. See? I'm Ron Washington and Justin Kahut was my Neftali Feliz? 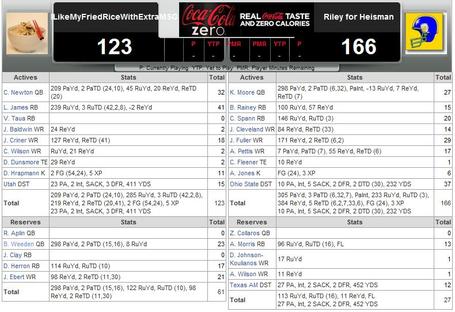 Riley for Heisman triumphed over ILikeMyFriedRiceWithExtraMSG 166-123 behind Kellen Moore and Jeff Fuller (quick, can you name who he plays for?) as well as a superlative performance from the Ohio State defense. MSG's Heisman-worthy duo of Cameron Newton and LaMichael James combined for 73 points, but got zero from Vai Taua and two from Jonathan Baldwin. Yeah. 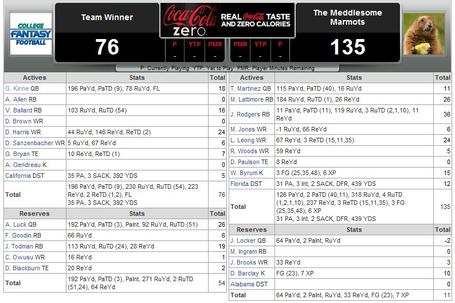 The Meddlesome Marmots crushed Team Winner 135-76 even on a down week for Taylor Martinez mostly because three of Team Winner's players didn't record a point. Not that swapping out his players for those on his bench would have made a difference, as Marcus Lattimore and Jacquizz Rodgers combined for 62 points by themselves for the Marmots. 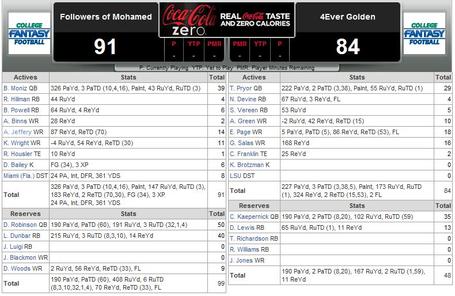 Followers of Mohamed defeated 4Ever Golden by a count of 91-84 behind 39 points from Bryant Moniz and the flyin' Hawaiian spread offense, but not much else.  But man, look at that bench! 90 points combined from Denard Robinson and Lance Dunbar! I think a lineup change might be in order. 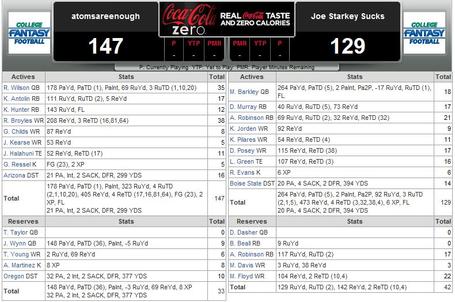 atomsareenough got by Joe Starkey Sucks 147-129 to claim a share of first behind Russell Wilson and Ryan Broyles. Starkey got decent games out of most of his players, but with no single performance of over 21 points, victory was not to be had on this day.

Damn that's a small picture. Anyway, what you need to know is that our man Hydro...let's just say his playoff chances aren't looking too good. 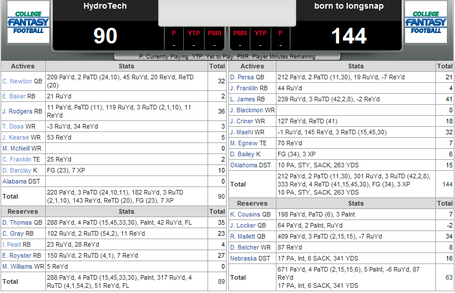 born to longsnap pulverized HydroTech 144-90 behind Jeff Maehl, Dan Persa, and LaMichael James. Hydro countered with Cam Newton and Jacquizz Rodgers, but was asleep at the wheel again as Evan Royster put up 27 points in his first sign of life this year. It wouldn't have made the difference, but it would have looked much more respectable. 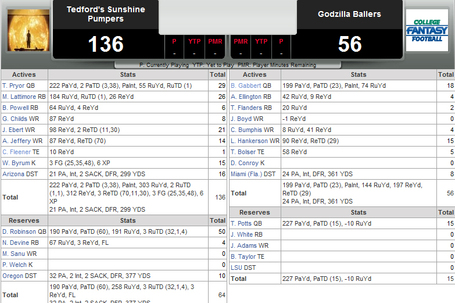 Ok, Tedford's Sunshine Pumpers really pulverized Godzilla Ballers 136-56 in the most lopsided result of the year in either league. The sad part is that Godzilla Ballers fielded a mostly complete team...they just decided to all suck at the same time, which wasn't a good idea against Terrelle Pryor, Marcus Lattimore, and the Arizona defense. And Denard Robinson's on the bench here too! What are you people thinking!?!? 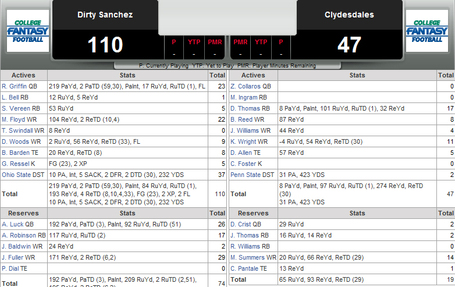 Last week was one of big blowouts, as Dirty Sanchez rolled by Clydesdales 110-47 behind Robert Griffin,Malcolm Floyd, and the Ohio State defense, which was (shockingly) enough to get by a team with an inactive QB, RB, and kicker. 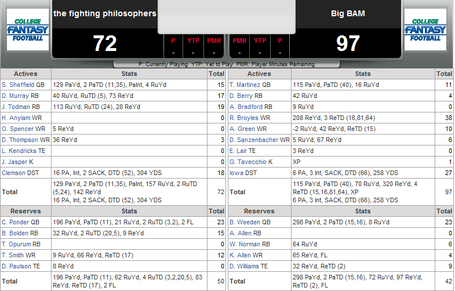 Big BAM continues her playoff push 97-72 over the fighting philosophers mostly on the strength of the Iowa defense and Ryan Broyles, which was enough to get by the biggest deadbeat in either league. 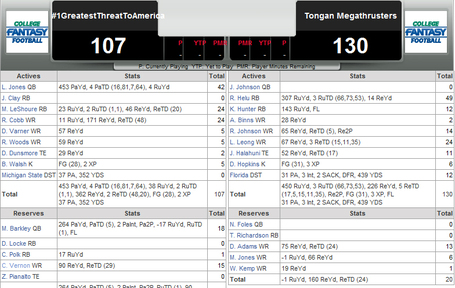