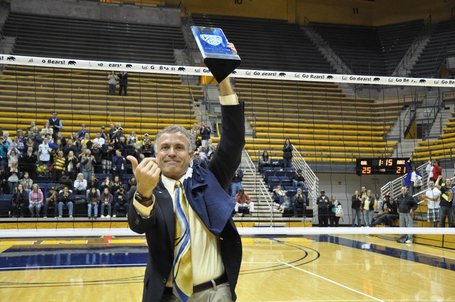 Cal grinded it out, but they took it in four sets from the Wildcats!


The Bears rebounded nicely today against Arizona after their loss to ASU on Wednesday night. You could sense that they were determined to find a way to win ~ and the Haas Pavilion crowd of 1,034 was very vocal in its support of the Bears. Even though the Bears couldn't quite find a way to stop Arizona's Whitney Dosty (30 kills), they did a good job of stopping the rest of the Arizona attack while outhitting the Wildcats, .272 to .170. Murrey and Hawari combined for 30 of the Bears' 61 kills and Cal out-blocked Arizona 14.5-8, always a good sign.

Like everyone else, No. 2-ranked Cal (25-3) awaits its post-season fate on Sunday afternoon. Entering the NCAA tournament on a winning streak is encouraging. The adventure continues next week ~ and, hopefully, Cal will host first and second rounds (my sources tell me they bid to host Friday and Saturday, and for once, there are no basketball scheduling conflicts to deny the opportunity to host). In the meantime, the journey has just begun ~ and, I think Carli Lloyd has a few more chapters she'd like to contribute to what has been a best seller of a season for the Bears.

After a tough loss against ASU, Cal looks to wrap things up in style. It's Carli Lloyd and Meagan Schmit's final regular season game at Haas Pavilion. Can she help Cal finally clinch at least a share of the Pac-10 title? GO BEARS!