It's Washington week!  It's Farewell to Memorial Stadium week!  It's Let's Save Ourselves From The Ignominy Of Bowl Ineligibility Week!

So what better occasion to engage in a little bit of Cal football masochism?  As we bid farewell to Memorial Stadium as we have known it for our entire Cal fan lives, LeonPowe and I thought -- what the hell.  Let's take a look back at one of the most painful, gutwrenching losses we ever witnessed at Memorial Stadium.

LeonPowe: After a disappointing 1992 season, Cal football began its 1993 season in scintillating fashion. Behind the accurate quarterbacking of Dave Barr, the running of Lindsey Chapman and a ferocious big hitting defense led by Jerrott Willard in the middle, Eric Zomalt at safety and freshman Regan Upshaw causing havoc on the line. 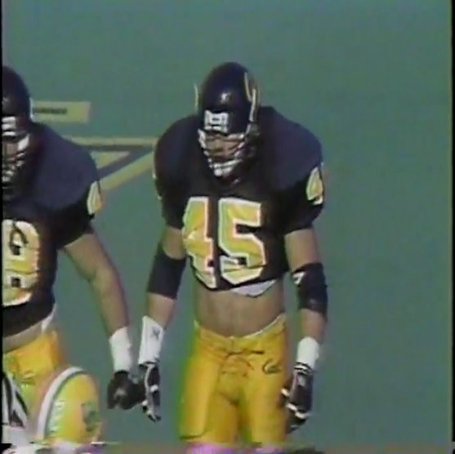 Jerrott Willard rocked the half shirt in 1993.

The Bears rolled out of the gate, winning  their first five games highlighted by a 27-25 win at UCLA (Eric Zomalt picking off a pass with :15 seconds left) and a 42-41 Miracle at Memorial comeback victory against the Ducks of Oregon where the Bears trailed in the first half 30-0 and came back to win on a Mike Caldwell 2-point conversion.

The following week, the 3-1 #13 Washingon Huskies came to town, behind Damon Huard, Napoleon Kaufman and (danger! danger!) All-Pac-10 tight end Mark Breuner. By this time, the 5-0 Cal Bears were ranked #16 and Cal fans - still giddy from the 1991 showed up at Memorial with Roses, thinking that this would be the game that determined who would play in Pasadena. (Note: I did not bring a rose, because even then, I knew that fate should not be tempted).

A typical fall Saturday in the Bay Area brought an overcast, but comfortable atmosphere to Memorial Stadium, and the Bears looked to continue their momentum right away. Barr threw two touchdown passes (Caldwell caught one- who I still think had the best hands of any Cal wideout, including Dawkins, Iheanyi, Bobby Shaw, G-Mac and DJax) and two Doug Brien field goals (hey! remember when our kicking game was one of our strengths?). And the Bears walked into the locker room with a 20-3 halftime lead.

Things were going pretty well. The Bear defense was shutting down Kaufman and pressuring Huard all over the place.  The Bears intercepted four of Huard's passes that day (Willard, Upshaw, Kevin Devine, and Artis Houston each got one) and forced fumbles by Huard two other times.  All told, the Bears got seven turnovers.  SEVEN!  I foolishly felt pretty comfortable with that lead. A third Doug Brien field goal and a Kaufman touchdown seemed to be all of the scoring that would happen in the second half, and the Bears were ready to walk out of Memorial with a win. The Husky fans started leaving in droves with about 4 minutes left. Bear Territory and na-na-na-na -hey-hey-goodbye started up. We waved good bye to 85% of the Husky fans.

I watched this game from seats above the south end zone, right next to the Washington visitors section.  We had kept the ample throng of Husky rooters fairly quiet for most of the game.  You could even sense in the Husky crowd a palpable sense of dread and foreboding -- like they were witnessing the beginning of the end of what had become a Husky dynasty in the Pac-10.  At no time in the game was this feeling more pronounced than when the reliable Brien was lining up to kick that 42-yard FG in the fourth quarter that would have essentially iced the game.   For you Cal fans who feel trepidation when we line up to kick field goals these days, you have to understand something about the Doug Brien era.  Dude was reliable.  Under 50 yards?  We expected him to make it.

So it was a shock to the Cal faithful when Brien's attempt sailed wide right, keeping the score at 23-10.  I won't lie -- I had a sickening feeling after Brien missed that field goal.  But on the very next series, it seemed like order was restored.  Artis Houston intercepted a Huard pass and Cal got the ball back.  Cal could not pick up a first down, though, and the Bears punted the ball back to the Huskies.  But with just over 3 minutes remaining and needing two scores, it seemed like Cal would be able to hold on.  And I was feeling pretty good when Washington had a 4th and 9 at its own 25.

But then it all turned to shit.  Washington converted the 4th and 9, bringing back the sickening feeling I had earlier when Brien missed the field goal.  And the feeling only got worse as Washington continued to march down the field, and scored a touchdown with 2:06 left to cut Cal's lead to 23-17.  But, hey -- we still got this, right?  Washington still needed to recover an onside kick, drive down the field, and score another touchdown.  Cal could surely stop that tidal wave, right?  Right?

So painfully rong.  It began with a hands team fail.  Cal's starting fullback, Marty Holly, had the onside kick bounce off him and the Huskies recovered.  A few plays later, Huard found WR Joe Kralik, a perennial pest (which I mean with the utmost respect), for a 10-yard gain on a fourth down play to keep the drive alive.  I begged the football gods to make Huard throw his fifth interception of the day and have us walk out of there with the win.  But it was not to be.  After the fourth down conversion, it seemed to get easy for the Huskies' offense.  They marched down to a first and goal at the Cal 7-yard line, heading toward the south end zone.  On second down, Huard found TE Mark Bruener inside the 5-yard line and Bruener took it into the left corner of the end zone for the touchdown.  The extra point gave Washington a 24-23 lead with 1:04 left.  Naturally, Cal failed on its last chance and Washington won the game.

The win set off a wild celebration in the southeast corner of Memorial Stadium, with the Washington players coming over to celebrate with their fans.  I tortured myself by staying to watch that for a little while.

News got worse after the game.  It turned out that Dave Barr suffered a serious shoulder injury (explaining a lack of pass plays by Cal in the fourth quarter) and he missed the next four games.  The Washington loss was the first of a horrendous four-game losing streak, which featured coach Keith Gilbertson's odd decision to burn true freshman QB Pat Barnes' redshirt in a 41-0 loss at Arizona State.

Ultimately, the season would end on a high note: Cal won its last four games, including a 46-17 throttling of Stanfurd in the Big Game and a 37-3 shellacking of Iowa in the Alamo Bowl.  But as Memorial Stadium as we know it comes to a close after Saturday's game against Washington, I can't help but remember one of the most painful games I saw in the old beloved stadium.

On the bright side, I guess we can always remember 2003, too: 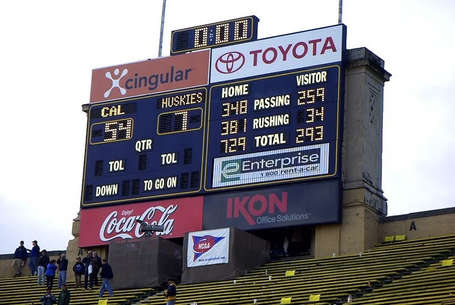 Cal beats Washington in a squeaker in 2003.

The Cal-Washington game at the "old" Memorial Stadium that I will remember most is: